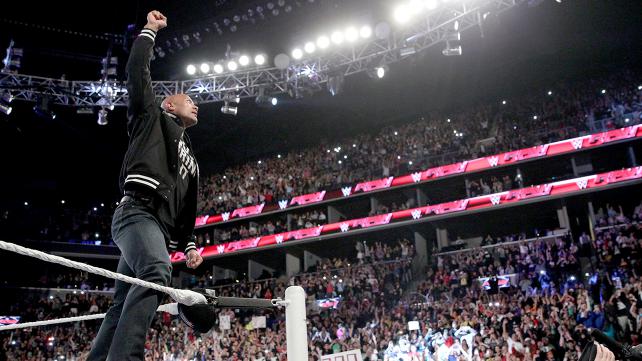 It took the Rock and Dean Ambrose shenanigans to make sure Raw wasn’t terrible this week.

The Rock returns to Raw.

In a huge surprise, The Rock made his return to Raw after more than a year and half. This return wasn’t advertised. I don’t know that it was a spur of the moment either though because Dave Meltzer hinted that Rock was in New York today. Well, he said it wasn’t a hint.

A short time before he came out on TV, the Rock alerted his Twitter followers.

Let's have some fun. LIVE in 3…2… #IfYaSmell #Surprise #RockOnRAW #BROOKLYN

Now, I think WWE probably took a hit on their ratings because they didn’t promote him. But I think it worked out better as a surprise moment anyway. I also think it shows that Rock was here as a one-time thing and not something that’s going to lead to an angle. If it was, they would’ve advertised him.

WWE teased that Lana and Rusev were going to come out to discuss Big Show’s apology after tearing down the Russian flag. They started to talk about the Big Show when Rock’s music started to play. The crowd fully expected it to be someone pretending to be Rock as they didn’t cheer until they saw him come out. But alas, it was the Rock.

The Rock was superbly entertaining. He kind of exposed everyone on the show, but hey, for this one time, I don’t think it really mattered because the crowd was sure they saw something special and on TV, it was clearly the most entertaining part of the show.

Rock hit all of his catch phrases which the crowd sang along with perfectly. He even told Lana she was smokin’, but then said, “You’re walking around here like someone shoved a Smirnoff bottle up your Putin.” He told Rusev that his breath smelled like Chewbacca’s bean bag. Lana told Rock that Rusev was going to crush him. And Rock said that he wanted to reintroduce himself and gave credit to Jay-Z for the line. He then went into his trailblazing, eye-brow raising spiel before sending Rusev out of the ring with punches.

I totally understand those who will say that Rock destroyed Rusev and I would slightly disagree. Rusev was merely sent out of the ring. He didn’t hit the Rock Bottom on him, nor did he leave him laying. Rusev took all of Rock’s punches, went over the top rope and was completely fine. He and Lana can use Rock’s name for weeks and even challenge him knowing that he’s not coming back like a real heel would do. Plus, who was Rock going to work with? It had to be Rusev.

The show-long storyline was that Dean Ambrose and John Cena were supposed to take on the trio of Seth Rollins, Randy Orton, and Kane to end the show. Rollins opened the show and escaped both Cena and Ambrose again. Ambrose came out later in the first hour and wasn’t too keen on Cena as his tag team partner since Cena left his side on Smackdown to chase Ambrose. He decided he was out of the handicap match, was going to get a hot dog, and Triple H made sure that Cena understood it would be a 3 on 1 match with Ambrose out.

The match was simply a set-up to the show ending angle which has been the pattern lately. Ambrose finally made his way to ringside with a hot dog cart after Cena took a beating. He squirted ketchup and mustard on Orton and Kane. But Rollins, like usual, escaped. But he’ll get his.

Triple H and Stephanie McMahon came out and announced the angle for Hell In A Cell which we covered on this website last weekend. Triple H said Cena or Ambrose would get their hands on Rollins, but only after they faced each other first. Whomever won would get Rollins in the cell.

And then Dean Ambrose sucker laid out John Cena with a DDT.

– Dolph Ziggler and the Usos beat Cesaro and Goldust and Stardust in a fun 6-man, which was the best match on the show. One of the Usos hit Stardust with a splash from the top.

– In a super weird segment, Kathy Lee and Hoda who were the “guest hosts”, were in the ring with Adam Rose. Adam Rose’s posse was huge tonight. Kathy Lee and Hoda didn’t really have anything to do so Hoda did a supposed crazy dance that wasn’t really crazy and then they broke fake glass on each other’s asses. Rose got them to fall backward into the Exotic Express and they were carried to the back.

– Bo Dallas now has a two-match winning streak on Mark Henry. He beat him by count-out.

– Brie Bella beat Summer Rae with one arm tied behind her back.

– Michael Cole interviewed Roman Reigns via satellite. It’s too bad Reigns isn’t a heel or else he could do the old Randy Orton RNN segments.

– El Torito beat Hornswaggle in the gator costume. And this after Hornswaggle put over their feud on Chris Jericho’s Talk Is Jericho podcast.

– Paige and AJ had to follow the Rock. Paige teamed with Alicia Fox and since AJ has no friends, she had to team with Emma. She walked out on poor Emma who was pinned by Paige.

– The Miz beat Sheamus while Damien Sandow got all the attention at ringside.

– Cancer survivor Joan Lunden who was on the cover of People Magazine last week cut a promo and John Cena hugged her.

The show wasn’t much better than it’s been of late, but thanks to Rock and some progression in the Ambrose/Cena/Rollins love triangle, there was at least something to make you smile.