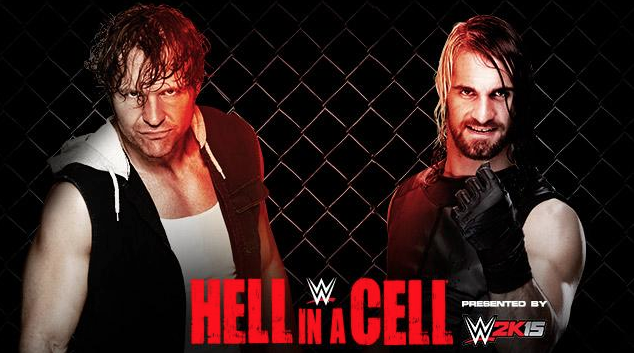 It’s a 2 out of 3 fall match for the Intercontinental title, which should lead to two predictable falls and an amazing third one.

Ziggler had some sort of arm submission on Cesaro, but Cesaro carried him over to the corner and fought him off. He then climbed to the second rope and herc’d him up for a suplex.

Cesaro tried for the Neutralizer but was hit with a super kick and a zig zag and Ziggler got the win in two straight falls.

Nikki beat her in a serviceable match. She had to hit her Rack Attack finisher twice in order to put her away.

Brie is now her personal assistant for thirty days.

3. The Usos Vs Goldust and Stardust

It was your normal, good WWE tag title strap match. Both teams are really good, but I think this feud is a bit stunted and they probably need to move on. The action was good and picked up late. But the crowd kind of sat on their hands until the end.

Goldust hit his Final Cut to win the match for the Dust bros.

There was a long documentary style package about Cena vs Orton. It looks like Ambrose and Rollins is going on last. But Orton somehow probably figures into the finish of the main.

This was very well done. It was more in the vein of regular Randy Orton matches which means it built slowly. That might’ve been the thing I liked most about it – the pace. They worked slow which meant everything they did meant more.

If you want to criticize it, you could criticize the fact that they had to each hit their finishing moves multiple times. In some instances, they got creative though. Orton turned an FU attempt into an RKO, which if Orton was winning, should’ve been the finish. But it wasn’t.

Instead, Orton brought a table into the ring. He’d already ran Cena into a table earlier. He wanted to hit the RKO on Cena from the top rope and into the table. When he couldn’t get it, he then wanted to superplex him through the table. Instead, Cena got him on his shoulders and hit the FU through the table for the win.

It looks like we’ll get that third Cena vs Lesnar match after all.

5. The Miz Vs Sheamus

I hope they do a finish where the referee can’t tell the difference between Miz and Damian Mizdow and counts the pin on Mizdow. It would be tremendously hokey WWE.

The match was solid. All eyes were on Mizdow on the outside who was mimicking all of what Miz was doing. Miz set up the Skull Crushing Finale after Mizdow got the referee’s attention. But Sheamus kicked out and eventually hit the big boot on Miz to win the match and keep his US title.

After the match, Mizdow laid himself out like Miz was. Sheamus picked up Miz’s arm and Mizdow picked up his. So they did some mimicking for the crowd.

Rusev kicked out of a choke slam at one point. But Big Show passed out from the Accolade. Mark Henry came out, but didn’t mean anything to the match and didn’t turn heel at the end.

There wasn’t much to the match at all. AJ tapped her out to the Black Widow. Paige was upset at Alicia Fox after the match was over.

They started the match on the top of the cell like an ode to Mankind Vs The Undertaker. Ambrose went up first. Rollins sent up Jamie Noble and Joey Mercury. Ambrose beat them both up, so Rollins had to follow.

And much like that match, they fell off the cell and went through a table. However, it wasn’t quite like Mankind.

They were trying to come down the side of the cage and were fighting their way down. They made it about 1/3 way down before they both fell through tables. 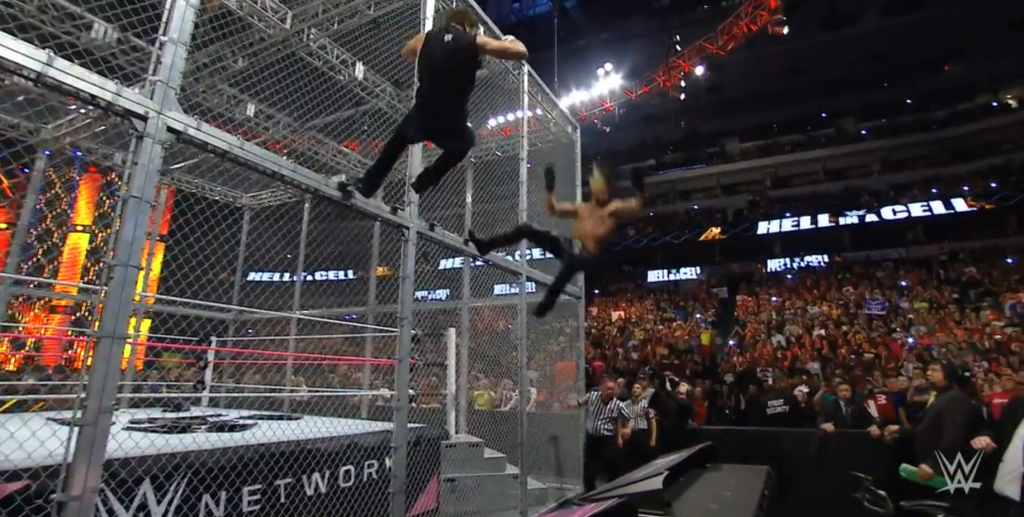 (GIF via Wrestling With Text)

This is more of a stunt match than anything else and it’s a good contrast between this match and the Cena/Orton match. Ambrose did a Macho Man elbow onto Ambrose who was laid out on a table that was perched between the ring and the cell.

Ambrose brought out cinder blocks to get revenge on Ambrose. He was about to curb stomp Rollins on the blocks but the screen went black. I actually thought the WWE Network went out for a second. There was some nonsensical language as the screen was black. When it came back, Ambrose was in a dark ring and a lantern was in the middle. There was smoke coming out of the lantern giving it a cool visual. The smoke was supposed to look like a ghost and then Bray Wyatt jumped out of the smoke to attack Ambrose. The camera seemed to be on the wrong side to give it the best visual, but it was still cool.

He gave Ambrose a big chokeslam and Rollins pinned him. He then hit the Sister Abigail afterward. I was wrong that Orton was going to be part of the main event.