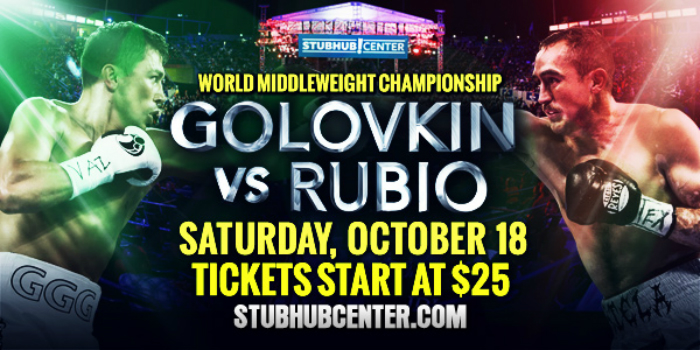 We know the number at this point; it’s 17. That’s 17 straight KOs in the career of Gennady Golovkin – the last 11 of those all in world title fights. It’s been six years since the judges were needed in one of the GGG’s bouts, and even then, that was only in an 8-rounder. The Kazakh is still yet to complete 12 rounds as a pro. During that run, Golovkin has crushed the best fighters in his division willing to face him, and he’s given all others good reason to avoid him. That’s what brings us to our main event on Saturday night with Marco Antonio Rubio.

Rubio (59-6-1) is a veteran fighter and tough guy; an honest contender on the fringe of world level. Compared to Golovkin’s competition since moving stateside, he’s about mid-range. I would say he belongs a clear level below top flight middleweights like Geale, Macklin and Stevens, but he’s also better than Gabe Rosado, Gregorz Proksa or Nobuhiro Ishida.

Rubio is probably best known as the guy picked to be a safe rebound fight for Kelly Pavlik back in 2009 after the Youngstown battler had been handed his first loss by Bernard Hopkins. Pavlik walked that fight, battering Rubio around the ring and eventually doing enough to convince the Mexican’s corner to retire their man in the 9th. That was however the last time Rubio was stopped, and he did at-least temporarily develop the reputation as something of an avoided fighter himself, after he shredded the much hyped, big punching but fragile, prospect David Lemieux in Canada. It was speculated at the time that Rubio, the danger-man that he was, would be frozen out of the title picture – particularly as it related to the then newly crowned WBC champion Julio Cesar Chavez Jr.

When Junior did eventually face off with Rubio and convincingly outpointed him over the distance, it was a win that some felt legitimized the young champion. However, for many others, who viewed Julio as no more than a mollycoddled, silver spoon prospect; it completely extinguished Rubio’s rep as a potential title threat. He went from being this monster puncher and avoided upset king to a patsy brought in to pad out the records of Top Rank stars like Pavlik and Chavez overnight.

Since then, Rubio has just sort of kept on trucking. He went back to Mexico and started to rebuild his ranking. He’s put together six wins against so-so competition leading into Saturday’s bout with Golovkin. The last of which, a 10th round stoppage of Domenico Spada back in April to capture the interim WBC title, was a very decent result, but it’s hard to see where he poses a real threat to Golovkin.

Rubio is durable and he can punch, so if you’re of the belief Golovkin is there to be hit; you might afford him a puncher’s chance. I don’t though. My feeling has always been that when Golovkin does get hit, it’s the result of reckless abandon. He knows he has to be spectacular and devastating every-time he steps in the ring if he wants to be a star. He puts himself in firing range to chase finishes because he backs himself to take the hit his opponent can’t. Curtis Stevens was as big a puncher as Rubio (if not bigger) and never once in eight rounds did he find the shot to discourage GGG.

The reports coming out of the Rubio camp is that he’ll look to make it a war right from the first bell. A lot of people have that plan until they feel the weight of Golovkin’s shots for the first time and then things change fast. Rubio’s team may feel that they’re best chance is in catching the champion cold in an early shootout, but if that’s his approach, he will be opening himself up to a boxer with superior timing, heavier hands and better accuracy. Rubio is going to become number 18 on the list. How long it lasts will depend on whether his gameplan is to win or survive. I’m picking the fifth, but if they both come out guns blazing, it could be earlier.

2015 is just around the corner. It’s time to start the search for our next batch of middleweight challengers.