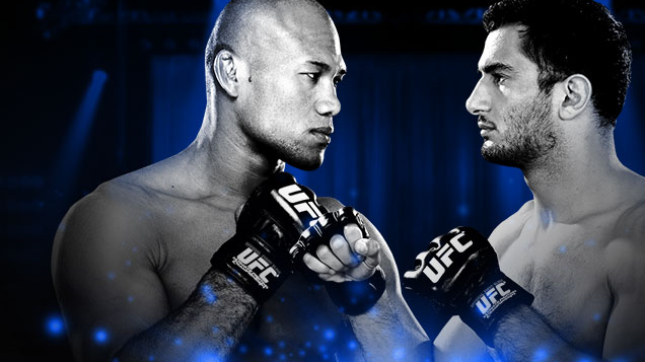 On a night when UFC, Bellator, and WWE Smackdown go head-to-head-to-head (at least somewhat on the east coast), we have live coverage of Fight Night – Jacare Vs Mousasi. 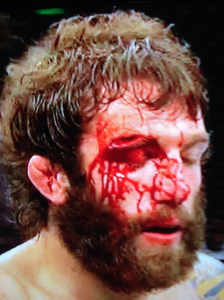 This was a close round and a really good round. Chiesa got a trip takedown and tried to take Lauzon’s back. He tried using his legs to push Lauzon’s legs down. Lauzon ended up on top, Chiesa turned over and Lauzon worked for a choke of his own. Back on their feet, Lauzon landed some nice punches, Chiesa got in some good knees and a kick. I’m going to score it 10-10, though no one else is.

The fight got stopped because of a bad cut over Chiesa’s right eye. Looks like it came from a knee. Both guys were game as Lauzon was going to the body and Chiesa made a comeback before Herb Dean paused the match so the doctor could check the cut.

Winner: Joe Lauzon by way of 2nd round TKO

If you look at the blown up cut on the right (click it to make it larger), you can see why it was cut. That’s Dusty Rhodes at Starrcade ’84 worthy.

Mitrione put Lewis down with a short right as they were both colliding and pushed him down with a forearm. Lewis tried to cover up, but Mitrione finished him.

Winner: Matt Mitrione by way of 1st round TKO

Overeem looked good early on, going low with leg kicks, using Jon Jones’ push kick (that should be banned), and landing nice kicks and knees to the body. Rothwell him him with a right hand that wobbled him, but Reem immediately grabbed him to catch his bearings. Rothwell caught him with another punch and he went down again. Two punches, two times Overeem lost his legs. Rothwell followed up with shots while Reem wasn’t covering up.

Winner: Ben Rothwell by way of 1st round TKO

Rothwell did a bit of a jig after the fight. I’m sure we’ll get a GIF up here soon.

Or how about a Vine?

Mousasi stopped an inside leg trip against the fence and a takedown, but Jacare got him down on the third try. Nothing much happened on the ground. Mousasi went for a triangle and threw up-kicks. Souza went for a Kimura. Souza’s round.

Souza’s round again. Jacare got another takedown and kept him on the ground. Mousasi had to fight off the ground and pound and a long attempt at a Kimura.

Mousasi couldn’t keep him off. Jacare finally finished it off with a sweet guillotine.

Winner: Souza by way of 3rd round submission