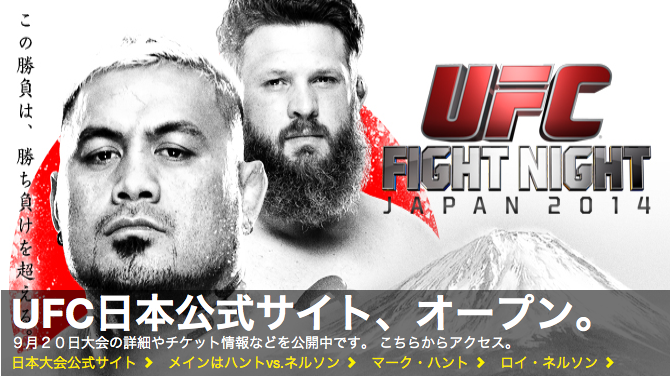 It’s UFC Fight Night Japan, which is always a fun show simply because of the environment. Follow along with our live coverage.

Winner: Kyoji Horiguchi by way of 1st round TKO

Jim Ross would call round one a slobber knocker. Kunimoto kept walking right into shots. He walked right into a left kick attempt as he put his head down and took a knee right to the face. Thankfully for him, he was kneed in the balls and was able to catch his breath after the stoppage in action. It was a clear first round for Walsh.

The second round was much closer. Walsh blasted him up against the cage. Kunimoto’s head movement isn’t there. But he did a much better job of moving his body in and out and because of his overall movement was hit much less. Walsh also tired himself out a bit. Kunimoto may have taken that round, but it was close.

Walsh may have lost this round by trying to fight Kunimoto’s attempt to take his back. He got Walsh down and held him in a body triangle. Walsh needed to get back to his feet and didn’t.

If that fight is scored as a whole, Walsh wins. Kunimoto eked out that second round on two scorecards and won the fight.

The round was more reminiscent of sparring than fighting. Nakai is clearly not in Tate’s league and in fact, brought Take’s performance down a bit. Tate was methodical, mostly because Nakai’s style is so awkward.

Nakai tried getting her back but was too high on it and Miesha nearly bucked her off. Miesha ended up in her guard. Miesha won all of the round when it was on the feet which is why she’s having no trouble with her.

Round three was slow and weird. Every time Miesha threw a punch, Nakai would get low to the ground and shoot. She got Miesha down a couple times but couldn’t keep her down. Miesha was very measured in the third round and landed the best shots.

One judge gave Nakai one of the rounds.

Awesome trip by Sexyama at about the 45 second mark. Sadollah couldn’t get up from the takedown for a good three minutes. Back on their feet, Sexyama landed a nice spinning back kick. Sadollah’s best shot was a counter right.

Sadollah looked better in the second round, but also took an absolute beating. He was landing leg kicks and also landed a couple head kicks, albeit glancing blows. Akiyama seemed to be thrown off his game for a bit until he landed a straight right that blasted Sadollah. Sadollah slipped after eating a jab and then while trying to throw a kick, was taken down. In a sense, this saved him as he was able to fight off his back and not get finished.

Akiyama started really throwing his right hand this round and he put Sadollah down again. Sadollah’s nose is bloody as the right hand from the first round may have broken his nose. Sadollah lasted the round, but took an absolute beating these last two rounds.

I thought Jury was going to play it safe and just use his reach to outpoint Gomi. I was wrong. He dropped Gomi with a right hand and then followed up with some ground and pound and it was stopped.

Winner: Myles Jury by way of 1st round TKO

Hunt landed the first big shot. Nelson shot in, but didn’t get the takedown. But Nelson came back with a nice combination and a leg kick. Hunt missed on some haymakers.

It looked like Nelson was going to start working to wear Hunt down. He got a takedown. But then Hunt landed an uppercut from hell and dropped Nelson. He didn’t even follow up. Nelson took a Flair flop to the ground and the referee waived it off.

Winner: Mark Hunt by way of 2nd round TKO