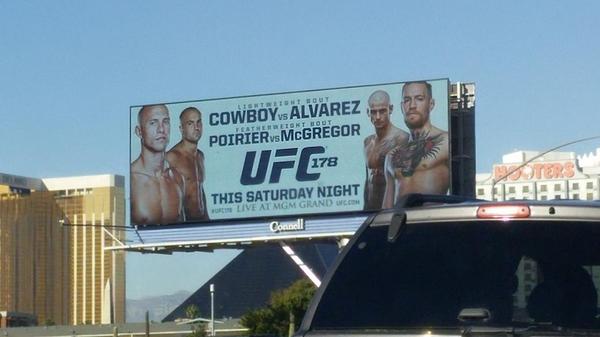 UFC 178 features a helluva an undercard.

All year, we’re keeping track of our picks for most of the UFC main card fights. In addition to the FGB crew, included in our picks are John LaRocca, president of Premier Wrestling, Heidi Fang from MMA Fight Corner, and Alex Goff from Online World Of Wrestling.

Duan and Jim are having quite a race for first place, but only four winners separate first from fifth.

Duan: Conor McGregor by decision
This is a major step-up fight for McGregor, but it’s also the match-up you would pick for him right now. He needed to face a top ten opponent in this next bout and Poirier is the one he’s most suited to beating. This is a real guy at 145; a genuine talent and a legitimate test for the Irishman, but he’s also somebody McGregor’s strengths match up very well against.

Poirier just doesn’t have the attributes to force McGregor out of his comfort zone. I see Conor picking him to pieces at range, and when Dustin can close the gap, I think he will be surprised by McGregor’s physical strength in at close quarters. Look, if McGregor wants to chase title shots and the big money names in the division, these are the type of fights he simply has to win. If he’s at 100%, he will do it and do it convincingly, but he might be extended a few rounds this time. Look for McGregor to take a clean sweep on the cards.

John: Dustin Poirier by decision
Though the real main event is Cerrone versus Alvarez, the fight that has caught my attention the most in the last few weeks has been Conor McGregor versus Dustin Poirier. The trash talking and heel persona of McGregor has me hooked. The heel work on the countdown show by McGregor was fantastic. It was a heel confidence that made you want to see him get beat. McGregor might have tugged on a tail of the wrong dog in Dustin Poirier. I have been a fan of this guy for a long time and he is damn good and very dangerous opponent. The pressure is all on McGregor here. A win over Poirier establishes him as being a legit top 145lber. With all that pressure on McGregor, I see “The Diamond” with his hands raised in a 29-28 victory.

Heidi: Eddie Alvarez by decision
The co-main event between Eddie Alvarez and Donald Cerrone presents an interesting matchup of one man on a win streak with violent finishes and one who has been dominant outside of the UFC, but has yet to prove he can hang with the world’s top talent. Cerrone has won his last 4 and earned 4 post-fight bonuses for each one. Alvarez is as resilient as they come and even if he starts slow, can’t be counted out. The fact that Cerrone often strays from his gameplan can work against him. Alvarez will come in focused, but can’t let Cerrone settle into a rhythm.

Jim: Donald Cerrone by submission
I am really looking forward to this fight and seeing how Eddie Alvarez fares against top level competition. He’s been considered the top lightweight outside the UFC for some time, but probably hasn’t faced the caliber of fighters he will be matched against since moving to the UFC org. Cerrone has been on fire lately with a 4-0 record in the last year. Cerrone has the UFC experience and although a veteran fighter, Alvarez has never been in the octagon. We have seen those UFC virgin jitters be the undoing of many an experienced fighter. Alvarez will need to control his nerves and not blow his load early in this fight or it will likely be a short night for him. On the ground I think Cerrone has the better submission skills offensively and defensively. On the feet Alvarez may have more raw power, but Cerrone has better technique and knows how to fight strategically. Alvarez tends to find himself in trouble at some point in a lot of his fights. He is very good at recovering, but if he finds himself on shaky legs in this outing I believe Cerrone is a calculating finisher that will get the job done where others have failed. My bet is at some point late in the fight Alvarez ends up hitting the canvas and Cerrone will follow him down and get the submission finish.

GG: Demetrious Johnson by late TKO
I think we have a clear mismatch here in the main event. Demetrious Johnson is at the top of his class at flyweight and he’s gone through all of his competition. The reality is that Chris Cariaso isn’t a true contender. He’s fighting for the title only because Johnson has cleaned out his division. I remember watching Cariaso fight my friend Anthony Figueroa back in 2008 in Strikeforce and even though he beat Figueroa that night, I thought they were fairly even. Fast forward six years later and he’s the type of guy who beats guys he’s supposed to beat and loses to guys he’s supposed to lose to. I don’t see that changing. The only question I have is how hard Johnson tries to stop him. I think Johnson can stop him either standing or on the ground. I’m going with late stoppage via some ground and pound.