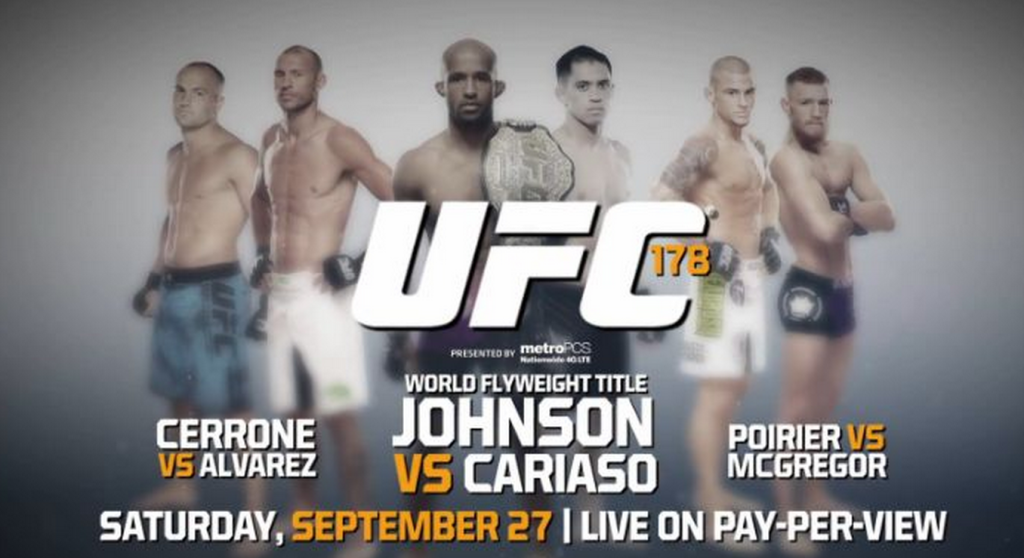 While the main event on paper alone won’t turn a lot of heads, UFC 178 has some really great fights on it. Check out our UFC 178 live coverage.

On the FS1 prelims main event, Dominick Cruz absolutely destroyed Takeya Mizugaki in the first round.

This was an obliteration by Nunes. She immediately got the takedown and Zingano decided to fight from her back and go for submissions. Nunes fought off an arm bar and started unloading bombs. She missed some, but really connected on a few of them. Zingano didn’t ever seem to look like she was going out, but they were landing cleanly. In a mistake, Nunes went for a submission, Zingano got top position and let her get up. She had a great throw late, which is what she tried earlier and didn’t get it because Nunes ended up on top. It resembled Raven’s old Evenflow DDT.

Moments before Cat Zingano stopped Amanda Nunes[/caption]Zingano pretty much dominated the second round on the ground. She kept going for ankle and leg locks, while still grape vining Nunes’ leg so that she wouldn’t lose position even if she lost the submission. Her corner was right on the money. She’s a better wrestler and as long as she’s on top, she can dominated. That’s exactly what happened. Whoever wins round three should get Ronda Rousey.

Cat stopped her in round three. She did the same takeover DDT move and got the mount and dropped punches and elbows on Nunes until it was stopped. Nunes was busted wide open.

Winner: Cat Zingano by way of 3rd round TKO

Romero controlled the majority of the round. He’s winging his left hand and connecting and busted open Kennedy’s mouth. Kennedy actually got the first takedown, but only for a second as Romero was back up and then he took Kennedy down. He also threw in a power double for good measure. Kennedy hasn’t really been able to get anything going.

Talk about being saved by the bell. Romero is such a different monster athletically, but he got tired and much slower. He still controlled the first half of the round. He landed a few big shots, but Kennedy used the back of the cage to bounce back and fire away. Kennedy tried a guillotine, but Romero pulled his head out. Kennedy caught him with an uppercut and he buckled. He was another 10 seconds way from being done but was saved by the bell.

Romero’s corner wouldn’t get out of the cage after the one minute break and Big John McCarthy had to kick them out. They looked to be trying to give Romero an extra few seconds of rest. He immediately caught Kennedy with a big left-right combination and Kennedy tried to get away, but couldn’t. Romero caught him and finished him on the ground.

Actually, the doctor was in the cage and Romero wouldn’t get off the stool right before that third round. He had an extra 20 seconds or so.

It didn’t take long for McGregor to finish him. McGregor unloaded his left hand, Poirier ducked under it slightly and McGregor’s elbow hit Poirier in the back of the head. Poirier was grazed and McGregor finished him quickly. The dude is a stud.

Winner: Conor McGregor by way of 1st round TKO

Alvarez wins round one. Cerrone was managing a nice distance using his knees and leg kicks, but Alvarez got inside, grabbed the back of Cerrone’s head and unleashed about 20 punches, many of which connected, dirty boxing style. Alvarez’s boxing is excellent and he lands punches with both hands. Cerrone got one takedown and didn’t really land a classic Cerrone shot in the round.

It was a great comeback round for Cerrone. He was kicking Alvarez’s lead leg and buckled Alvarez twice. He also used body kicks and knees. Alvarez looks like a beat man at the end of the round. He also took a shot in the eye and was having issues with it. Cerrone may try to size up that head kick in round three.

Alvarez let his one Hail Mary fly and he rocked Cerrone with an over-the-top right hand. But otherwise, it was all Cerrone. Cerrone’s leg kicks wore out Alvarez. Alvarez was knocked down from the last one and Cerrone ended up on top as the round ended. Cerrone should win this one 29-28.

All Johnson in a ho hum round until the last 10 seconds of the round. Johnson threw a right hand that landed and knocked Cariaso back and he followed it up with a knee that buckled Cariaso. As the bell sounded, Cariaso fell forward. He was nearly done.

Cariaso was out of his league here. Johnson had him down, trapped his arms and was punching him in the head and then subbed him with a kimura.

Winner: Demetrious Johnson by way of 2nd round submission