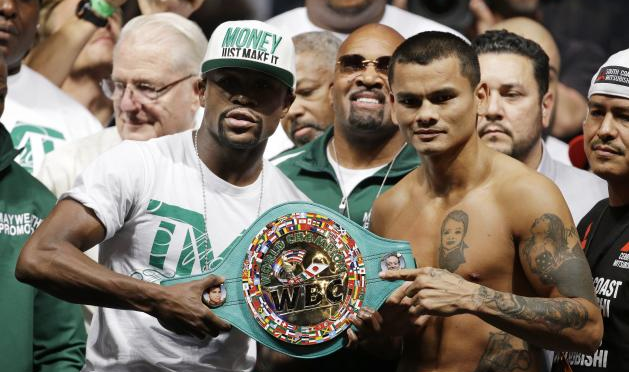 We’ve got Mayweather Vs Maidana 2 live coverage tonight. Tune in.

Really slow first round. Mayweather tripped trying to get out of dodge. Maidana landed one nice right hand. Mayweather landed a couple of nice left hooks, which looks to be open all day.

That was an easier round for Mayweather. Maidana is walking right into the left hook. Maidana had a couple of nice jabs, but when they get inside, the hand speed isn’t there tonight. Mayweather ended the round strong.

Maidana had Mayweather in the corner and unloaded, but either hit his arms or swung and missed on every punch. Mayweather is landed the lead straight right. Maidana’s best shots were a straight right that he followed up on after missing a right and a nice jab. Maidana landed a great right hand at the end of the round. Still Mayweather’s round and I have him up 3-0.

This round resembled the first few rounds of their first fight. Maidana was out for blood and actually snuck a few punches through the defense on the ropes. Also, hitting to the body which has slowed Floyd down a bit. Really good round for Maidana and I have it 3-1 Floyd.

Maidana couldn’t follow up the same tempo as the fourth. The round was much more in Mayweather’s rhythm and he probably took the round even though neither guy really did a lot. Both guys showed excellent defense in the round.

Maidana was letting the leather fly but he wasn’t landing. He was throwing wild overhand rights and lefts and whiffing. Mayweather had some nice short counters and won the round.

Maidana’s getting predictable (or has been and it’s getting worse). Maidana throws the double jab from time to time but never throws the right hand after the double jab. He only throws it after the single jab. It was another Mayweather round. Both of them look to be tired; Mayweather more tired than usual unless he’s playing possum.

This was yet another Mayweather cruise round until late in the round when Floyd claimed that Maidana bit his glove when they were in a clinch and Mayweather’s glove was underneath his throat. Maidana definitely had his mouth open. There was a fracas for a good minute or so. Still, Mayweather’s round.

Mayweather did a whole lot of holding this round. Maidana had a good round and if someone gave Maidana this round, I wouldn’t complain. Floyd rung his bell at the bell and Maidana walked to the wrong corner.

Ever since the bite, referee Kenny Bayless is quick to separate. The one time he didn’t get in there quick enough, Maidana used his forearm to push Mayweather back and he fell. Bayless took a point from Maidana which was unfortunate. Maidana won the round, but because of the point, it was a push round.

Back to the basics for Floyd and Maidana looked frustrated. There were points when Maidana tried to go Donkey Kong on him, but they were few and far between.

Maidana won the round, but too little too late. Floyd got on his bicycle for much of the round.

I have Floyd winning 9 rounds, Maidana winning 2, and one draw round.