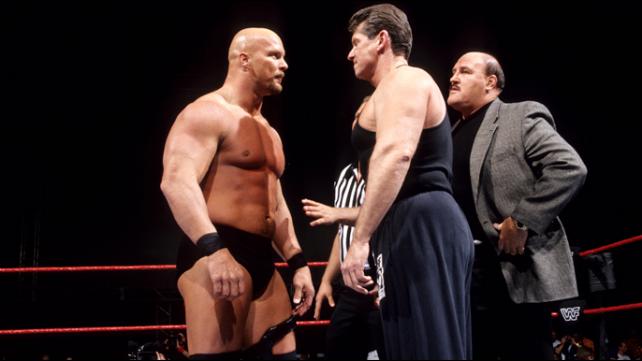 Finally, they get to the real star of the Monday Night War.

Throughout the first seven episodes, we’ve learned that the Monday Night War concept isn’t a series of documentaries that tie in together, much like Ken Burns’ documentary about baseball. Instead, each (outside of the first which was an introduction to the series) is a one-hour stand alone episode that doesn’t mesh with the others.

And there’s no rhyme or reason to the order in which these are rolled out. What’s also interesting is that in episode three, they covered what they considered to be the attitude era, which Big D wrote about last month. So in discussing the Stone Cold Steve Austin phenomenon, some of this is repeat information.

Then again, if you’ve seen any of the tapes and DVDs that WWE has produced over the last seventeen or so years, you know this entire story by heart. And while the hardcore fans may feel like this story is repeat footage, with most of it taken from the stellar Blu ray release Stone Cold Steve Austin – The Bottom Line on the Most Popular Superstar , you have to produce these like much of your audience doesn’t know the entire story. I guarantee you that there are WWE Network subscribers who are either newer fans or who don’t know the insides and outs of the story. So hardcore fans, you’ll just have to re-watch a lot of great footage.

Because this Monday Night War Stone Cold Steve Austin episode, titled The Austin Era Has Begun (shoutout to good old JR for that one) cribs mostly from the Blu ray release, the story is about as rock solid as you’re going to get. As we’ve discussed in the past when reviewing these episodes, WWE narrative (to the victor goes the spoils) dominates and they’re not always telling the true history. But with Austin’s story, there’s nothing really to fib about. He kicked ass and was the biggest star in WWF history.

What’s funny to me about the story of the Monday Night War is that it’s a pretty open and shut case. If you wanted to narrow it down to three things, you’d narrow it down to Austin vs McMahon, Bill Goldberg being beaten, and Eric Bischoff and company flushing millions of dollars down the drain which caused them to be shut down.

There are multiple layers of which many have been covered (and many haven’t yet like stories on Goldberg and Sting) like ECW’s role in the war. While the rise of ECW helped shape WWE’s vision, maybe the most important factor in ECW’s role in the Monday Night War was Paul Heyman as Austin’s motivational coach. Austin has always given Heyman credit for helping him dial into his character and cut money drawing promos from the time off he had between WCW and WWE. I don’t think Austin simply didn’t have it until Heyman took a hold of him. But much like a fiery football coach who gets the best out of his players, I believe Heyman helped Austin channel where the source of his promos should come from; his experience and frustration.

I think the most fascinating thing to me about watching this episode is that Austin literally gave his neck to win the war. And it goes to show you that even if you know the story, there are things you can still learn. They showed the infamous SummerSlam 1997 match with Owen Hart where Hart messed up the inverted pile driver and dropped Austin on top of his head. Austin took time out of the ring, but still did television to keep his character over since his run with the title was upcoming. But his neck never healed and he eventually had to have surgery which signaled the end of his career just a few years after that. While there were monetary reason for Austin to continue his hottest run of his career, you get the feeling that the competition with WCW was a strong reason for Austin to not get his neck taken care of sooner. I believe the pressures from the Monday Night War were a big reason for his career to be cut short.

Austin’s mentality is to take everything in stride and it’s really his take on his career. After he won the WWE Heavyweight title from Shawn Michaels at WrestleMania XIV, they showed press conference footage where he talked about waiting 8 years for the moment. Earlier in the piece, they showed footage of him saying that he didn’t become a star over night and that he had quite the journey. It reminded me of a quote by Los Angeles Lakers’ superstar Kobe Bryant in a recent interview with the New York Times. He said that he loved the process and journey of getting to the top. Austin who is his own worst critic, seems to feel exactly the same way.

His WCW career is quickly covered and Eric Bischoff is produced in a way that makes him look like a fool for giving up on Austin and blaming it on his injuries and his inability to be healthy when they needed him. And there’s a small part about his early WWE days as the Ringmaster which John Cena called unmemorable. But as expected, things kicked off first with his Austin 3:16 promo after winning the King Of The Ring and then big time after losing to Bret Hart at WrestleMania 13. That footage of Austin bleeding while in Bret Hart’s Sharpshooter will always take me back.

There isn’t enough credit given to Mike Tyson for finally helping Austin and WWE turn the corner, but that’s expected. And of course, the episode ends with Austin’s two biggest feuds with Vince McMahon and the Rock. I expect the Austin vs McMahon and Austin vs Rock feuds to be heavily covered in the new Rivalries series that is expected on the network soon.

Sean Waltman, aka XPac, had the quote of the entire series thus far. When talking about why Austin was the biggest superstar of all-time, he said, “I made a lot of money because of Stone Cold Steve Austin.”

And he wasn’t the only one.