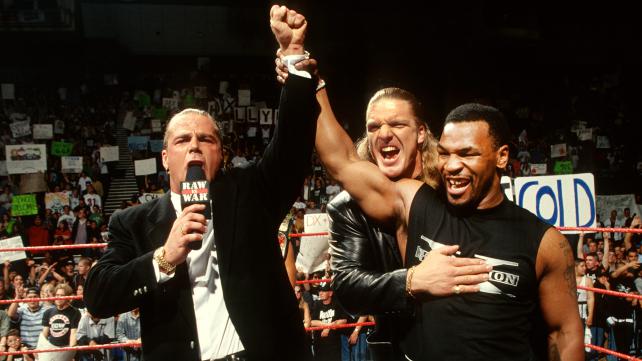 This Monday Night War episode, titled A New D-Generation would lead you to believe that they were a much bigger deal than they probably were, but that was the be expected. It’s hard to qualify what the group truly meant for business, but they were definitely one of the main transitional talents in WWE’s Attitude Era. And much like all the Monday Night War episodes thus far, the series used ratings as the key business indicator and in trying to promote DX as a draw, they couldn’t prove it in their own spin. Why? WWE never overtook WCW in the ratings when the original DX was in existence.

They’d finally caught up to WCW after WrestleMania XIV and the original DX was gone by then. And the reason they caught WCW had far more to do with Stone Cold Steve Austin being hot as fire than Triple H, X-Pac, Road Dog, and Billy Gunn collectively.

Part of my struggle with the Monday Night War series so far (and we’ve linked all our reviews at the bottom) is that I’m not quite sure what the goal is. We know what happened. WCW Nitro overtook WWE’s Monday Night Raw and held a ratings advantage for two years before WWE overtook them and WCW went out of business. So we’re not learning anything new with this series. But instead of re-telling the history and doing a month-by-month comparison (or even, 6 longer episodes recapping the years 1995-2000), they’ve decided to do hour-long character portrayals and fit them into a messy narrative.

How did D-Generation X help WWE overtake WCW? Where’s the business numbers? During DX segments, did Raw overtake Nitro? Were they draws at the box office. My guess is no, or sometimes, but based on this episode, we have no idea. The story told is the same DX story that’s been told multiple times on multiple DVDs.

But that’s not to say it’s a boring ride. It’s a fun and entertaining episode if you take it at face value. There’s tons of footage from Raw in 1997 (not that we haven’t seen it before) and watching Shawn Michaels and Triple H act the fool is always fun.

They were heels who loved being cheered, which wasn’t all that different from the nWo. But Shawn said that the difference between DX and the nWo was that the nWo inflicted all the punishment in gang-like warfare and DX was always getting beat up. Oh yah, and the nWo moved business. Well, Shawn didn’t actually say that.

Personally, I wasn’t much of a DX fan. They were 30-year old men acting like teenage kids doing crotch chops and telling other men to “suck it.” I mean, that’s what they were doing right? It’s not like WWE’s fan base was 50% female. And even worse, when Shawn retired temporarily and Triple H was put in the lead, the suck it stuff got worse. Triple H’s introduction of, “Let’s get ready to suck it,” actually means, “Let us get ready to suck it.” Really Triple H, you were hosting a suck it orgy with your three best friends in the middle of the ring?

I told my co-writer of these reviews Big D that we shouldn’t expect the series to be what we want. We’re wrestling fans who enjoy wrestling history and try our best to recite the history when we write about wrestling. This isn’t WWE’s goal with this series. They’re trying to show how much better WWE was than WCW and really, it was the fans’ fault that they didn’t see that sooner. But they would. And then WCW would be dead. The end.