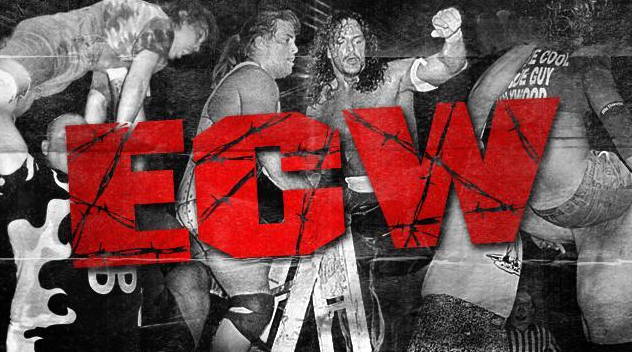 Now I am going to begin this review by plainly stating that if you want to learn about ECW, there are not one, not two, but THREE quality documentaries to check out, all of them different, unique, essential to tell the story of ECW. WWE’s Rise & Fall of ECW came out ten years ago and is still considered by many to be their finest documentary ever, and to this day the only TV-MA DVD the company ever released (the F and S word were used). Jeremy Borash did a really fun doc called Forever Hardcore featuring interviews with all of the talent that was NOT on WWE’s DVD as well as telling other stories not covered on the WWE doc. Most recently, a new documentary entitled Barbed Wire City was released which has received tremendous critical acclaim due to its unbiased analysis of ECW’s real impact on the business and on the workers, plus it features a plethora of very important people that didn’t appear on either of the other two docs. In addition, the new Paul Heyman DVD/Blu ray has a lot of cool tidbits and insights on ECW.

If you want true insight on ECW, any and all of those documentaries is the absolute best way to go and unfortunately, much like a lot of these Monday Night War episodes, this ECW episode of the Monday Night War is basically a consolidated, one-hour version of a story that WWE has told in the past. The first quarter of the episode focuses on ECW’s innovation and style with the expected blood and guts as well as their emphasis on talented, athletic workrate-based matches which was a real juxtaposition against the WWF and WCW’s overly cartoonish, muscled up characters and goofball antics.

About a quarter into it, we get into WCW’s “raid” of ECW talents; namely Eddie Guerrero, Dean Malenko, Chris Jericho, and the NOT-mentioned Chris Benoit (you can tell Heyman used his name but it was cleverly edited). Bischoff was smart in what he did because these gentlemen, along with Rey Mysterio, Juventud Guerrera, and many others, were among the best in the entire world and this influx of mid-card talent provided more food for the diverse buffet table offered on WCW Monday Nitro. What they didn’t mention here is that a lot of those talents had deals with New Japan Pro Wrestling and AAA respectively; two companies that WCW quickly became married to in 1995 as they began their expansion. Imagine that. The #2 North American company wants to beat the #1 company so they partner up with the #1 company in Mexico and the #1 company in Japan. I cannot begin to describe the absolute nirvana of the talented and varied roster that WCW had under the palm of their hands. Heyman admits on here that even though the raid was annoying, it made sense to add these guys to their roster to battle Vince McMahon as they needed all the ammo they could gather.

The episode talked about the story of the Philadelphia “In Your House” show in September of 1996 where Sandman spit beer on Savio Vega. It created quite the buzz. The gloves were off during the war and this led to the infamous 1997 angle where ECW invaded Monday Night Raw. This kind of thing is completely unheard of nowadays. Can you imagine if Jay and Mark Briscoe showed up on Raw with Ring of Honor shirts and laid out Zach Ryder? I mean, that’s the only thing that comes close and even that isn’t even in the same ballpark. They talked about ECW’s first PPV, “Barely Legal” in 1997 and how their exposure on WWF television helped garner more of a nationwide interest. ECW’s participation on Raw was only for a few episodes, but the angle continued in ECW as Jerry Lawler led a group of defecting ECW talents (Sabu and RVD) against the company, leading to a big blowoff on the 2nd ECW PPV in the summer of 1997 featuring a Tommy Dreamer vs. Jerry Lawler match.

Keith David labels the ECW/WWE stuff as a “partnership.” Ha, definitely not in the business sense of the word.

The gist of this episode is basically ECW’s influence on the Monday Night War, both in supplying talent to the bigger companies, as well as how the WWF Attitude emulated ECW’s revolution. Dreamer talks about how WWF was inspired by ECW’s rugged style, but what they don’t tell you is that there were blatant copies of angles – most notably at the Survivor Series 1996 when Sid used a camera to defeated Shawn Michaels, literally ONE DAY after ECW used one on “November to Remember.” Vince admits that he saw ECW as a breeding ground for talent (kind of what NXT is now) except not WWE controlled.

In 1999/2000, Vince took Taz and the Dudleys from ECW while WCW took Sandman, Bam Bam Bigelow, Chris Candido, and others. Heyman claims that WCW raided ECW in 1999 just to hurt ECW. Okay, that’s fair. But what about the fact that when WWF-contracted Taz was the ECW Champion in 2000 for one week after beating WCW-contracted Mike Awesome, he was made to look like a complete geek in WWF during the time he was champion. On April 15th in Madison Square Garden, which is in New York, one of ECW’s essential markets and Taz’s home state, he jobbed to European champion Eddie Guerrero. The European championship was a C-level title at the time. The next night in Pittsburgh, another ECW hotbed, he lost to Eddie again. On Raw, Taz then lost a three-way to Crash Holly. Then on Smackdown, WWF champion Triple H pinned Taz after Dreamer tried to interfere and ended up screwing Taz accidentally. Hun Tor pedigreed them both, making them look like complete goobers in the process. Just a coincidence right?

The documentary concludes with WWE’s 2006 ECW brand relaunch and the One Night Stand PPV, which to me was a perfect farewell for the company.

As I mentioned, this is basically a cliff-notes version of the story of ECW, focusing primarily on the peak years of the company until its demise. One will immediately notice that ECW gets an incredible level of slack when compared to WCW on this episode. Even though it’s been over a decade, you can almost sense that there are people in WWE who are still hurt over WCW and that bias never ends. Regardless, if you really want to know about ECW, peep the documentaries I mentioned in the introduction.