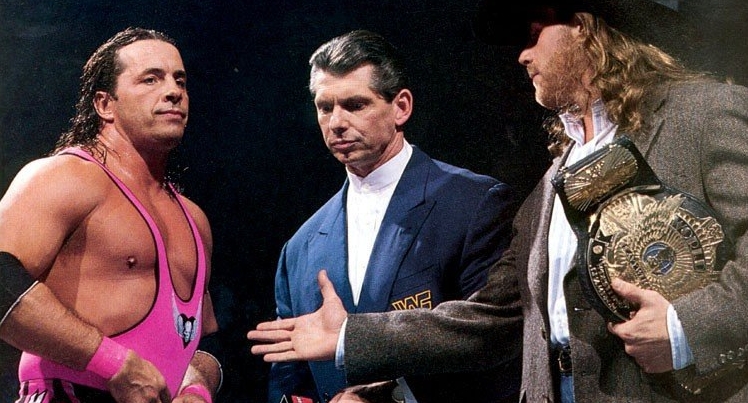 Of course, you knew the Montreal Screw Job was going to get its own episode.

Technically, episode six of the Monday Night War is called The Hart Of War, and while the first half (or maybe slightly less) deals with Bret Hart’s role in the WWE in 1996 and 1997, the rest of the episode is about the Montreal Screw Job as is to be expected.

If you’re expecting a fair and balanced look at the screw job, this is not the place for you. You get WWE’s normal spiel that Bret Hart gave them no choice but for Vince to screw him at the infamous Survivor Series in 1997, when it’s clearly not the case.

And it’s unfortunate because I thought the first half of the episode was well done. The story was geared toward Bret Hart being phased out and Shawn Michaels being phased in, and while it wasn’t the complete story that was told, it was enough to whet the appetite for the screw job portion of the episode. And really, the 1996 and 1997 years in WWE are the most interesting years from an inside-WWE perspective.

Surprisingly, they hit on a few things leading up to Montreal that I wasn’t sure they were going to discuss.

– They talked about Shawn’s “I lost my smile,” speech on Raw where he dropped the belt because of an knee injury. But they got the importance wrong and used Michael’s excuse of the injury as the reason he didn’t drop the belt to Bret Hart at WrestleMania 13. It’s been reported that Vince McMahon had already changed his mind to go with the Undertaker and Sycho Sid at WrestleMania 13 instead of Hart and Michaels in their WrestleMania 12 rematch. Michael’s knee injury just made sure that he wouldn’t face Hart at the show. We covered this on WrestleMania 30 for 30.

– They covered Michael’s “Sunny days” comment where he inferred that Bret Hart was cheating on his wife with Sunny. Bret said it never happened and that it was a low blow that affected his family. Michael’s attributed his actions to him being messed up from pain pill addiction in interviews that we’ve seen before.

– The follow-up to that was a locker room fight in June of that year that was touched upon, but not given much time.

Here’s how Dave Meltzer described it in the June 16, 1997 version of the Observer:

Most versions have it that Hart was screaming about how Michaels comments affected his personal life and he crossed the line and that Michaels was a smart-ass back. The two went at it, with most versions having it that Hart started it but that Michaels was every bit as guilty in precipitating it. It was believed to have been a one-sided short tussle which resulted in a few punches thrown and a large clump of Michaels’ hair being pulled out of his head to the point it was described that Michaels was given a major bald spot. Michaels face was all puffed up from the punches and he was bleeding from the elbow, apparently from being thrown on the floor. Hart apparently aggravated his recently repaired knee, but none of the injuries were serious.

What was also surprising was the footage shown from Hart’s documentary, Wrestling With Shadows that was the most inside visual look fans had ever had into wrestling at that point. They use bits and pieces of it, but only to help with their narrative. For those that haven’t seen it, it’s a must-watch and is available on YouTube.

When it came to covering Montreal, the two people who outright lied about the situation were Vince Russo and Triple H. It’s smart strategy to have Russo chime in about it because everything thinks he lies anyway. Russo says that Bret gave Vince no choice in the matter and turned down every idea they had to take the title off him. Also, Triple H (in a weird 2007 interview) said that they were worried Bret would show up on WCW television with their title.

What was clear was that Bret never wanted to leave WWE, but Eric Bischoff wanted to grab yet another WWE guy, which he said was because Ted Turner wanted a second WCW weekly program (Thunder) and he needed more talent. The reality is probably that he loved taking WWE’s guys and thought it could be the last stake in WWE’s heart.

Hart said that he never wanted to leave and threw out a 3-million dollars-a-year number out there to get Bischoff to leave him alone. But Bischoff said they could make it work. He only wanted Vince McMahon to get close to the number which would give him an idea where he stood within WWE. Vince countered with a 20-year lifetime contract in which Bret would be active for a few years and then be on the booking team for the rest of it. That was enough for Bret to accept, yet Vince said that he wasn’t sure he could afford it after the fact and wondered if Bret was even deserving of that much.

(In the November 17, 1997 issue of the Wrestling Observer, Dave Meltzer said McMahon met with Hart in early September in hopes of getting Hart to defer more than half of his weekly salary as they were in bad financial straights.)

As everyone knows, Vince told Bret that he was going to breach his contract because they couldn’t afford him and to see if he could re-negotiate with WCW again. Bret also had a 30-day out clause in which he’d have “reasonable creative control” of his character on his way out so they couldn’t bury him. Of course, in discussing the Montreal Screw Job, this was never brought up once in the episode.

They also didn’t cover the meeting that Bret, Shawn, and Vince had where Shawn said that he would never do any jobs and further meetings where Shawn said he wouldn’t put Bret over to his face even after Bret said he’d put Shawn over at the end of his WWE run.

Because Bret’s character was patriotic toward Canada, he didn’t feel like it made sense to lose the title to Michaels in Montreal, but had no problems losing it to Michaels after that. This was also not covered in the episode.

What also wasn’t covered is that at the end of October, McMahon went back to Hart and said they’d have no trouble covering the contract that he signed. It was at that point that Bischoff finally made an offer and it was a back and forth situation until McMahon proposed a direction that Hart wasn’t comfortable with and caused him to sign the WCW contract.

McMahon told Hart that he wanted him back as a babyface, and had been wanting him to turn babyface for two or three months but just hadn’t brought it up until this point. He then presented a scenario to Hart, presenting it as a way to get Hart to stay, but obviously designed to get Hart to take the WCW offer. He wanted Michaels to win the title in Montreal. For Springfield, they would do a Final Four match with he, Michaels, Undertaker and Ken Shamrock, that Michaels would again win. At the Royal Rumble, the two would have a ladder match, which Michaels would win. On Raw on 1/19 in Fresno, CA, Hart would open the show and say that if he couldn’t beat Michaels and win the title that night, that he would retire from wrestling, and in that match he would regain the title. And then in Boston at Wrestlemania, he’d drop the title to Austin. Hart looked at that scenario of four major losses with only one win and before his midnight deadline, gave official notice to the WWF and signed the contract WCW had sent over, with the agreement from all three parties that the word wouldn’t leak out until 11/10 to protect the Survivor Series PPV.

The episode hit on Hart being upset because he always thought he and Vince had a father/son kind of relationship, so the actual screw job was heartbreaking because of their relationship.

The episode didn’t cover the planned finish, but Meltzer describes how it was supposed to happen.

As they were putting their spots together, Patterson came in. He had a suggestion for a high spot in the match as a false finish. There would be a referee bump. Michaels would put Hart in his own sharpshooter. Hart would reverse the hold. Hebner would still be down at this point and not see Michaels tap out. Hart would release the hold to revive Hebner. Michaels would hit him when he turned around with the sweet chin music. A second ref, Mike Ciota, would haul ass to the ring and begin the count. A few paces behind, Owen Hart and Smith, and possibly Neidhart as well, would run down to the ring. Ciota would count 1-2, and whomever got to the ring first, likely Owen, would drag Ciota out of the ring. While they think they’ve saved the day on the pin on Bret, suddenly Hebner would recover, 1-2, and Bret would kick out. That would set the pace for about five more minutes of near falls before it would end up in a disqualification ending.

According to Meltzer, Vader and Davey Boy Smith both warned Bret to kick out at one and not be allowed to be put in submission holds for fear of the screw job.

You can watch the match in-full on the WWE Network.

The last few minutes of the episode was about Bret’s foray into WCW, including X-Pac saying that his run was such a failure that what everyone would remember his WCW run for was an angle with Bill Goldberg in which he wore a shield around his midsection to counter Golberg’s spear. Well, I think they’d remember his match with Chris Benoit after Owen died more, but X-Pac couldn’t say that.

The screwing of Bret Hart was the impetus to the Mr. McMahon heel character and JBL said he thought WWE was done after Bret left, but then said that Vince knows what he’s doing and used the Attitude Era was proof. Well, Vince also had Stone Cold Steve Austin and The Rock both readying themselves for stardom.

The ending of the episode was a bit insincere in that they showed the 2010 Raw which was Bret Hart’s return (going head-to-head with TNA’s first live Monday night Impact) to WWE in which he and Michaels shook hands. And then they showed Vince McMahon and Bret raising each other’s hands up which kickstarted their WrestleMania 26 angle. The closing of the episode was this visual, but they didn’t show McMahon suckering him right after.

The episode was entertaining, but frustrating at the same time. I can’t imagine Bret Hart would be happy with his portrayal considering he’s told his side of the story (which most feel is the truth) ad nauseum, but then again, at this point, he might not care.