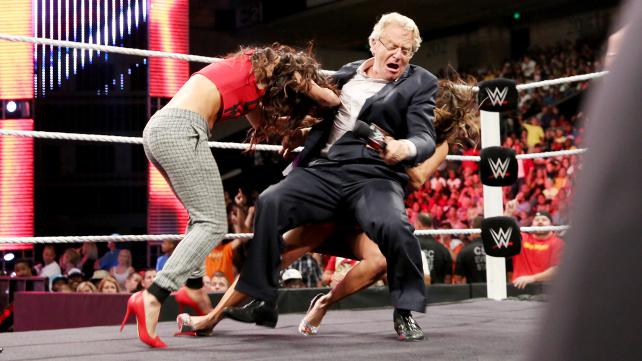 Talk about an up and down Raw.

You had a really good segment. Then a bad one. Then a passionate one. Then a terrible one. And then they closed with a boring angle that was supposed to elicit compassion from the audience. But I think they were bored.

Paul Heyman is the Emperor.

Heyman came out for a segment to discuss John Cena. He was actually quite positive about Cena, saying that he always told Brock Lesnar that Cena was the greatest WWE champion of all-time. As he was buttering Cena up, he tried to give him the game plan in beating Lesnar. Cena said he already knew it and it was three words. I really thought he was going to say, “I love you.” But instead, he said those three words were his motto, “Never give up.”

Heyman continued to tell him the game plan and it had to do with Cena getting angry. He wanted Cena to understand that it’s okay to be bothered when the fans don’t cheer for him considering all that he’s done for them. Paul even showed him how to by yelling at the crowd to shut up after they said, “Cena sucks.” Heyman even pretended to be John Cena circa 2002 and did a short rhyme. Cena pretended to go with the plan but instead told Heyman to shut up. He then said how important it is to him to talk to people who tell him that they live his creed of never giving up. He was doing excellently until he said that the feeling was more important than winning a match.

Overall, it was long, but the performances were strong. Cena made one faux pas by saying that the match wasn’t as important, but otherwise, it was good stuff.

Stephanie McMahon said that Jerry Springer would bring the Bellas back together. To cut this short, Jerry gave each woman time to state her case, then showed their parents in short video clips and brought out their brother JJ who took Brie’s side. The Bellas started fighting, Jerry was rolled over on and somehow Steph got involved and she also rolled over on Jerry. At some point, Jerry hurt his ribs and his ankle and Steph was trying to hold the segment together by apologizing to him but also blaming Brie for getting out of control.

This was really bad and I can’t imagine people didn’t change the channel back to football during this segment.

Jerry was stretchered to the back and looked embarrassed as all hell. Imagine what it would take for Springer to be embarrassed.

This was slow, built to a finish, but ended painfully.

As you’d expect in a Randy Orton match, it was slow and methodical and told the story of the babyface being beaten down until his late comeback. Orton had teased that he was going to hurt Reigns worse than Seth Rollins did Dean Ambrose. Triple H gave him the okay.

As Reigns made his comeback, Rollins and Kane interrupted the match and caused Orton to get disqualified. The three beat up on Reigns with the idea that they were going to trap him inside the cage (Chris Jericho and Bray Wyatt had a cage match to open the show). As the cage was coming down, Reigns came back again and it was just him and Orton inside the ring together. Orton jumped him and Rollins entered the cage by jumping off the top of it and onto Reigns, which was a repeat spot from Jericho’s match with Wyatt earlier.

There would be no comeback for Reigns here and he has no friends, so he wasn’t helped. The last five minutes of this show felt like it went on forever.

– Wyatt beat Jericho is a pretty darn good cage match to start the show. Jericho was trying to go over the top of the cage to win, but Luke Harper and Erick Rowan were waiting for him, so instead of diving on top of them and winning, he decided to dive back into the ring and onto Bray. But he hurt his knee on his landing (kayfabe) and Bray took advantage of it and beat Jericho through the cage door to win.

– Dolph Ziggler and the Miz had an in-ring segment that was a reference to the celebrity photo hacking that happened last week. I’m too mature to actually call it by its name. Dolph hacked Miz’s cell phone for some reason. Unless he was looking for photos of Maryse, I’m not sure why he did this. The photos were of Miz wearing a cleansing mask, shaving his chest, and getting his ass spray tanned. It was a waste of time.

– AJ and Paige beat Rosa Mendes and Natalya. If you had Rosa wrestling the entire match and Natalya not getting tagged in, you win. AJ made Rosa tap.

– Seth Rollins beat Sheamus and Cesaro beat up Sheamus after the match.

– In one of the best segments on the show, Adrian Neville and Sami Zayn beat Tyler Breeze and Tyson Kidd. They face each other in a Fatal Fourway on the second NXT Takeover which is on Thursday. The show was set up for Neville to run wild after the hot tag and the crowd got into it in the end.

– Goldust and Stardust beat the Matadors.