If you expected any follow up to last night’s super important main event, well, you’re looking in the wrong place.

I expected Raw to kickoff in amazing fashion after the peculiar way in which Night Of Champions ended with Seth Rollins, John Cena, and Brock Lesnar tied up into some weird battle triangle. But then again, I’m not sure why I expected that. This is WWE. They don’t always follow up. The focus wasn’t on Brock Lesnar as he wasn’t there. And it wasn’t on John Cena either as he played second fiddle to Dean Ambrose tonight, which was fine. But when you built an entire PPV over the importance of your WWE World Heavyweight championship that ended with an explanation needed, you’d expect to get it on Raw. Instead, you got more of Dean Ambrose Vs Seth Rollins which would be fine if it wasn’t the same old stuff happening again and again.

Dean Ambrose is trapped in the closet.

Okay, it was more like a small room than a closet, but R. Kelly wasn’t singing about being trapped in a small room.

The show opened with Dean Ambrose in the ring talking about how he wasn’t dead. He decided he was going to sit in the ring until Seth Rollins came out. Rollins didn’t come out. Instead, it was John Cena. Cena walked around the ring twice like he was a Bushwacker. He even took off his hat once to rub his head while in walking motion. Ambrose basically told him not to give him a reason to dislike him. Cena told Ambrose that they had a common enemy in Rollins. The Authority came out, but before Triple H could talk, Cena jumped the Authority and went after Rollins. Neither he or Dean could really get to him as Randy Orton and Kane acted like bodyguards. Ambrose finally got to him but when they went backstage, Rollins jumped in a car and raced off.

Orton and Kane were upset that they continually had to clean up Rollins’ mess. Triple H and Stephanie McMahon booked Orton to face Cena and Kane to face Ambrose later. They were upset and Stephanie said she thought they’d want to gain some retribution as if to say Cena and Ambrose handled them earlier.

Ambrose beat Kane by disqualification because of Rollins’ run-in. They double teamed Ambrose and got out of dodge. But backstage, Triple H was talking to them both when Ambrose jumped them again. Like last night, security carried Ambrose out. Triple H wanted him out of the building. I guess they were just going to swing him and drop him in the street. But Stephanie thought better of it and said that they should lock him in the broom closet (or whatever the room was) because everyone they kick out of the arena just comes back.

Seth apologized to Randy backstage and told him he and Kane would second him in his match with Cena and also that they had a surprise.

Cena and Orton had their usual match and just like clockwork, as Cena had the STFU locked in, Rollins and Kane interfered for the DQ. Rollins’ surprise was that he was going to crush Cena’s head with cinder blocks like they did with Ambrose. Kane lifted the box that the cinder blocks were supposed to be under and Mean Dean Ambrose was hiding inside the box. What a sneak attack artist. He went wild and he and Cena were in the middle of the ring having run off the bad guys as Rollins ran through the crowd. 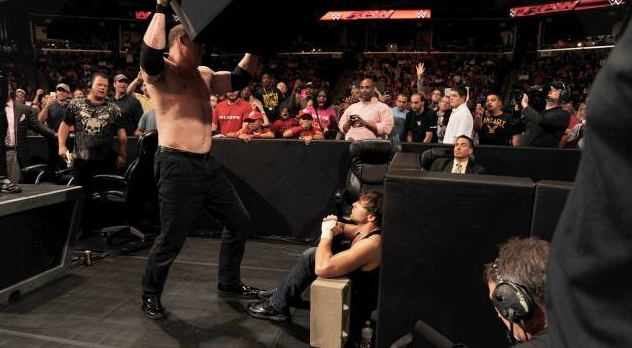 – Dolph Ziggler won the Intercontinental title back from Miz. I don’t understand one day title reigns.

– Jack Swagger beat Bo Dallas with the Patriot Lock. Zeb Colter mocked Dallas’ catchphrase after the match. Might as well put Dallas in the bunny costume.

– Summer Rae lost to Natalya in a continuation of their Total Divas feud. The best part of the match was Layla who looked absolutely stunning.

– Sheamus and the Usos beat Cesaro and Goldust and Stardust after an Uso pinned Goldust. I think this was the longest match on the show.

– Rusev beat Mark Henry again by submission, but this time, Henry passed out. That’s what should’ve happened last night instead of tapping out.

– Adam Rose and his new tag team partner, the bunny beat Slater Gator. The bunny ran wild like Hulk Hogan in his prime before tagging out to Rose who won with the party foul.

– Nikki Bella called Brie into the ring so they could continue their argument which usually kills ratings. This time, Nikki said Brie was so selfish that she should take on Daniel Bryan’s name so Nikki could be the one and only true Bella. This led into Nikki’s match with AJ Lee which she lost to the Black Widow.

If you’re a Dean Ambrose fan and missed him, you got a lot of him tonight. Though, this was the first time I was tired of his feud with Rollins as they did the same thing on consecutive nights. Without Brock Lesnar or Paul Heyman, the show felt like it was missing some continuity. It was the main thing I was looking forward to and nothing happened there, so it felt like a bit of a rip off. Add to the run-in disqualifications in both of the main event matches and you had a pretty blah Raw.