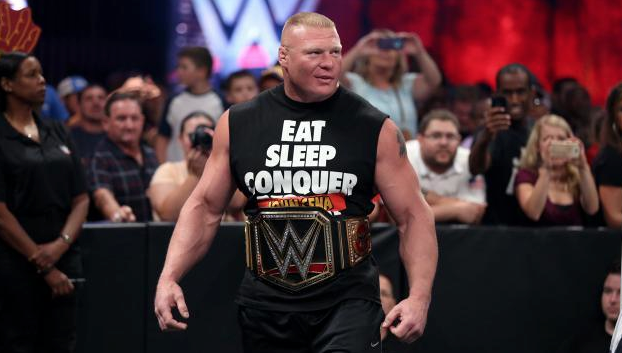 It’s the go-home show for Night Of Champions.

This was one of the most oddly booked go-home shows you’ll ever seen considering they gave away one of the PPV matches for free and Mark Henry was in the main event segment.

Last week, John Cena told Paul Heyman that he was going to beat up Paul of Paul didn’t produce Brock Lesnar for tonight’s Raw. Brock didn’t come out at the beginning of the show so Cena held Heyman hostage. Heyman pulled the same Emperor Palpatine routine as last week, playing mind games with Cena so that he’d lose his cool.

He took Paul into his dressing room and locked him in. The Great Khali watched the door for him, which made me think Brock was breaking in and breaking Khali, but sadly, that never happened. Cena said if Brock wasn’t there at halftime (specifically chosen word since they were going head up against Monday Night Football), he was going to break Paul’s face.

It was time and Brock wasn’t there, so Cena put Paul in a headlock and brought him back to the ring. Heyman tried to get Cena to snap again and begged him to hit him. Cena finally lost his cool after Heyman told him that he was a nice boy for not hitting him. But then made a wise crack about Cena’s mom and John having no testicles and he snapped. He kicked Heyman out of the ring. Finally, Brock came out. He teased not going into the ring and simply grabbed Paul and started walking to the back. He handed his new title belt to Paul and got in the ring. Cena jumped him, but soon enough, he snatched Cena and tossed him in a German suplex. Cena didn’t stay down for long and knocked Brock out of the ring and ended up pummeling him with ground and pound.

They were broken up and Brock walked to the back with Heyman.

As a stand alone running story, it was pretty good. The Heyman/Cena episodes were long, but they were still decent. The problem with this? This is how the show should’ve ended. Instead, they had three more matches and Mark Henry in the main event segment after this. Why? I think I know, but I’ll add that later.

This one made no sense. Roman Reigns beat him in a regular TV match. There was no angle. There was no run-in. Seth didn’t cheat. No tease for Dean. No tease for Kane. Reigns simply beat him and they’re supposed to rematch at Night Of Champions. So we have to pay for the shenanigans?

Jack Swagger must be so jealous.

Throughout the show, Mark Henry packages aired. An olympic gold medalist high jumper whose name I can’t remember cut a promo in Henry’s favor earlier in the show.

After Rollins and Reigns was over, that left this in the main event segment. Henry said that he can’t let America down by losing to Rusev. Lana made fun of Henry for choking in the olympics. Rusev and Henry battled and Rusev tried to put him in the Camel Clutch but he powered out and cleared the ring.

If you wanted to add Hogan to this angle, I can see it being in the main event. But without Hogan, I can’t imagine people stayed on this show.

– Chris Jericho beat Libertarian Kane. Last week, Randy Orton beat up Jericho’s knee because it was the season premiere of Raw (and Orton even brought this up later in an interview), but Jericho’s knee looked 100% here. I didn’t even see him limp.

– Nikki Bella and Paige beat AJ Lee and Brie Bella after Paige beat Brie. Nikki hit whatever her finisher is on Brie after. Paige and AJ skipped to spite each other.

– Big Show beat Bray Wyatt by DQ after the rest of the family ran in. Show did the double choke slam on Erick Rowan and Luke Harper at the same time.

– Sheamus and The Usos beat Antonio Cesar and Goldust & Stardust in a really long match.

– Naomi beat Cameron in what seemed like a 60 minute match.

– Dolph Zigger and R-Truth (as his stunt double) beat The Miz and Damien Mizdow.

On the go-home show to Night Of Champions Mark Henry is your last memory. Why were Stephanie McMahon and Triple H not on this show? Did they not want to be in losing segments to the NFL? I think the Cena/Lesnar segment was at the time it was, was simply because they wanted the NFL game to be at halftime, hoping people would change to Raw from the game. Did it work? I guess we’ll see in the ratings Tuesday. But even if it did, it made for a super disjointed show.