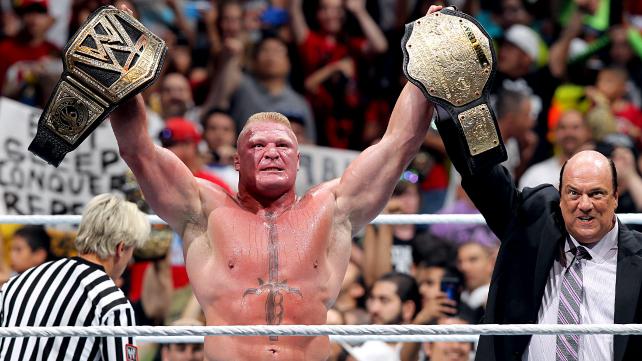 On Sunday, Brock Lesnar and John Cena collide in the main event of Night Of Champions. Is it possible that John Cena wins?

Before we get to that question, if there was ever a one-match show, this is it. Night Of Champions has one marquee match and it’s the main event. While there are matches that some may want to see like Cesaro vs Sheamus, WWE’s weekly TV has made sure that nothing comes close to overshadowing the WWE World Heavyweight title match.

Just last week on Raw, what some would consider the semi-main event between Seth Rollins and Roman Reigns was given away and Reigns won in decisive fashion, leaving us no reason to want to see the match, other than thinking that they’ll top the match stylistically.

(EDIT: Roman Reigns is off Night Of Champions after emergency surgery.)

The Miz and Dolph Ziggler has been overdone (and made silly with stunt doubles) week after week since their fun SummerSlam match. Chris Jericho and Randy Orton feels like it was put together at the very last minute and there’s no real reason for their grudge. Plus, we know that it will be Jericho’s last match in WWE for some time, so the surprise of who will win has already been removed before the match has even started, which is most of the drama anyway.

Paige vs AJ has run its course except that we know if given time, they might be able to have an even better match than the last time. Well, until Nikki Bella was added to the mix. Mark Henry vs Rusev has a fun, old school feel to it, but then we’re going to have to see them lock up. And while the Usos and Goldust and Stardust should have an excellent match, it feels like that match would’ve been hotter last month rather than this month.

Thus, while the undercard will be good enough to support the main event simply because the wrestlers are too good for it not to, some may see it as two hours and fifteen minutes of filler before we get to the main event. Because of how bad Raw has been of late, WWE is risking that the crowd won’t be into these matches or give them a real chance.

The main event has been built up well. But I’m not sure fans were ever given a logical reason for it to happen. In other sports like MMA or boxing, if someone was beaten to a pulp like John Cena was against Brock Lesnar, the rematch wouldn’t happen immediately. (Think Mike Tyson vs Michael Spinks.) In WWE’s reasoning, because John Cena is their marquee star and a heavy number of their WWE Network subscribers were up for renewal this month, it was the only main event that they could do.

I agree with that last minute thinking, but it hurts Cena’s and possibly Lesnar’s character based on what the finish is going to be in the match. If Lesnar wins decisively, Cena must take at least a few weeks off and come back with a new wrinkle (which is exactly what we said after SummerSlam). If he doesn’t, his character runs the risk of becoming the most stale it’s ever been. If Cena wins then Lesnar’s victory over the Undertaker at WrestleMania was all for naught and like a bad TV series finale, the last few months would all be a dream.

The FGB crew has their thoughts on the main event and what they believe will happen.

Duan:
I can’t believe that a billion dollar company is run by people dumb enough to squander what they have here. Granted, they did already once do irreparable damage to Brock as a draw with this exact match up (in 2012), but I see a clear difference between then and now. That is the difference between building something yourself vs having it fall into your hands. Historically, WWE has an appalling track record of capitalizing on opportunities that have just been handed to them. You can think back to the WCW invasion, Goldberg’s push, Brock’s return and countless other examples. It’s almost in their DNA to destroy what they didn’t build. However, when it comes to something they have put their own time, effort and money into creating, they tend to be a lot better at getting things right. They have done that with Brock since WrestleMania 30. This is a guy who they first had break the most historic run in the company’s history and then follow it up by trouncing their biggest star in a glorified squash. They did not do all that for a one month title reign. No way! I refuse to believe it.

Cena pulls out all the stops this time and runs him close, but Lesnar still proves too much and comes away with another clean win to go two straight while sanity prevails.

Alan:
From when it was first announced to where we’re at now, the idea that Cena wins the title back has gained considerable momentum and it now appears that it’s the outcome most are expecting. I’m still holding out hope though. It may be blind optimism and it may be giving WWE credit that they have worked hard to be undeserving of in the last 6 months, but I think they’ll do the right thing here.

They have something in Brock Lesnar and it’s something they don’t have in anybody else on the roster. Even Dean Ambrose who may be the only other hot character in the company doesn’t have the aura of Lesnar. I understand he’s expensive and using him month in month out may be cost prohibitive, but he needs to be THE MAN whether he’s there or not. Have him looming large in the background when he’s not around and let him make the impact he can make when he is. Brock needs to be the champion for a long time, Mania needs to be built around him, and his eventual fall has to be a gigantic deal.

A clean Brock triumph in a match which is way more competitive than the prior one (thus making Cena look stronger) is absolutely the way this should go. Would I be surprised if that happened? Yes. But they surprised me at SummerSlam.

Cadillac Don:
The WWE has a chance to do something big this Sunday.

Cena is not going to win. In a perfect world, it’s not even going to be close.

First it was Bray Wyatt trying to turn Cena to the Dark Side, now it’s Heyman, trying to speak through the fans who are tired and bored of the stale John Cena. If somebody has the title, pretty soon Cena is going to get a shot at it. And good chance he’s going to win.

What will happen? Probably what Alan suggested. A more competitive match that Brock ends up winning, and Cena earns his respect? No.

What I’d like to see happen? Cena tries to draw from the first time he defeated Lesnar, but Brock doesn’t make a mistake this time. This time he destroys Cena again. Hurts him badly. Makes him bleed. Cena has to take time off from the WWE to recover from his injuries. He’s broken. He knows he can’t beat Brock now. This man destroyed the Undertaker, and we haven’t heard from him since.

Cena now doubts himself. Doubts the way he sleeps, wakes, and lives as John Cena. Perhaps he goes under the tutelage of Paul Heyman and becomes a darker character. Or perhaps I’m getting ahead of myself.

Big D:
As I’ve stated on social media, in a perfect world, this match at NOC should’ve never happened. If WWE actually had a semblance of long term planning, they would’ve had a number of babyfaces lined up for Brock Lesnar to run through, whether it be protected established guys like Jericho, or up and comers who can get the rub from a main event match with Brock like a Cesaro. You could book these matches like the early 90s Kobashi/Williams matches where Kenta Kobashi was a young midcarder and never beat the main-eventer Steve Williams, but gave him a little bit of a fight and went down in a blaze of glory, even kicking out of the Oklahoma Stampede once, which got him more over than winning and made him a star.

But I digress, because WWE in the past 5-6 years has effectively killed and buried any character with momentum with the exception of Cena and now Roman Reigns, whom is supposedly being protected for a big WrestleMania win, WWE was forced to rush into a John Cena rematch. Now a lot of people have claimed that a Cena rematch would be perfectly fine if they gave Cena some time off and they slowly rebuilt him for a big redemption rematch down the line, thinking it’s a better way to do it. The problem with that thinking is that WWE ALREADY completely and ridiculously botched Cena’s redemption storyline with the Rock in 2012/2013, so “long-term” doesn’t always work for WWE.

Anyway, Brock should win and win convincingly. With this match, you can give Cena MORE hope spots, and even a spot where he uses a weapon and maybe Heyman gets involved to help Brock, catches Cena off guard, and Brock catches him in something. Ideally, Brock would break Cena’s arm here with the kimura and send him away for a bit, but that won’t happen because Cena is booked with Rollins on the loops. Does that mean Cena wins and Rollins cashes? I sure as hell hope not, but it seems like a likely scenario.

Some folks think Cena wins this one and they do a third one. If that happens, I really wouldn’t be surprised, but like I’ve said time and time again – if Brock Lesnar loses anytime before WrestleMania 31, then the breaking of the streak means absolutely nothing. So if they want to disrespect the Undertaker, their own brand, and the fans, it won’t be the first or last time. I can’t even get mad about it anymore.

GG:
I think most everyone has already said what I wanted to say, except what I’m about to say. A John Cena win not only ruins plans for making WrestleMania a huge deal, it ruins Brock Lesnar’s character, and it also ruins his own. Cena’s character right now is stale and having him beat Lesnar in 2012, beat Rock in 2013, and win the WWE Heavyweight championship after Daniel Bryan had to relinquish the title did nothing to improve his standing. Like D said, if his 3-year long story with Rock was supposed to be another jump off point for Cena, it actually worked in the opposite fashion. It made him more stale.

That’s why I think that for his sake, he has to lose this match and come back slightly differently, maybe with more of an edge. I don’t think he needs to be a heel. I think it’d be working against his strength. But to be a little more of a badass (sort of like what he’s trying to do now) would be for the better. It would rejuvenate him. You don’t want to have to rejuvenate when it’s too late.

I think Cena and Brock have a really great match and Brock wins by the skin of his teeth. Hopefully, he’ll cheat. Then again, I thought that’s what was going to happen in 2012 and it didn’t.