It’s a very important night for WWE as the true plans for WrestleMania should be set in stone based on who wins the main event.

On the kickoff show, Christian invited Chris Jericho to be on the Peep Show. They did some comedy reminding people of their tag team from back in the day. Randy Orton interrupted their fun and made fun of them. Jericho cut a promo on him to end the kickoff show. It was absolutely nothing.

Follow along for our Night Of Champions live coverage.

1. The Usos Vs Goldust and Stardust

It was a good opener that started out slow, but picked up near the finish. Goldust did a somersault flip off the apron onto Jimmy. Jey dove over the top on Cody. Back in the ring, Jey dove off the top rope onto Goldust, but Goldust got his knees up and rolled him up for the win. The Dust bros are the new tag team champs.

This was an excellent hard-hitting match. Cesaro was great at everything he did, including hitting Sheamus with some nasty uppercuts in the corner. He had an answer for everything Sheamus did, including rolling him up after he moved out of the way of the Brogue kick and rolling him up. Near the end, Cesaro had him in the corner as Sheamus was telling him to bring it on after Sheamus slapped him in the face and continued to hit him with uppercuts.

The referee separated Cesaro from the corner which allowed Sheamus to hit the Brogue kick for the win. 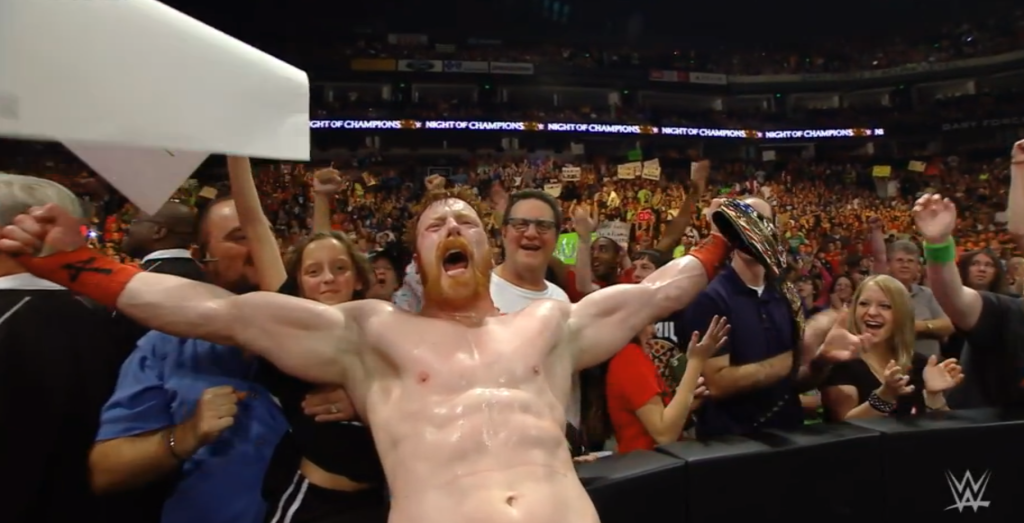 3. The Miz Vs Dolph Ziggler

WWE must’ve figured that this was the match that fans cared least about because they had the country group Florida Georgia Line come out and do commentary. Much of the commentary was about their upcoming album and being at Tribute For The Troops, and not the match.

There was a part in the match where Damien Mizdow suckered R-Truth and then went after the Florida Georgia Line guys. They both weight about 150 pounds each with pipe cleaner arms and stack of dime necks. Of course they pushed him down in what was a half punch/half push. It looked terrible.

Miz had the Figure Four on Ziggler, but he got the ropes. Mizdow came out and Zigger hit him with a super kick, but that allowed Miz to roll him up and grab the tights. Ziggler was quick to pull the tights down so I think those things got pulled down pretty far.

Miz is the new Intercontinental champ.

Seth Rollins came out and said he’d give Roman Reigns 10 seconds to come out or else he wins. He issued a challenge for anyone to come and face him.

Of course, it was Dean Ambrose who the crowd was already calling for.

He and Seth brawled in the crowd. Ambrose did a dive on all the security that the Authority brought out to stop him. They caught him and carried him out.

Lillian Garcia came out to sing the National Anthem in the ring while Mark Henry cried. No Nikolai Volkoff for Rusev.

This was the worst match of the night. The story was that Rusev hurt Henry’s back to set him up for the Camel Clutch. Henry powered out once, but not again. It was closer to a long squash than it was to a competitive wrestling match. Rusev was put over strong.

It was the best traditional wrestling match on the show. Their pace and timing was really good. But the crowd did its best to try and not care. But by the end, the guys got them to care.

Orton had Jericho for the draping DDT, but Jericho turned it into the Lion Tamer. Orton was ready for the RKO and Jericho hit the Code Breaker. He went to the top rope and stood up there forever while Orton tried to gain his bearings. He finally jumped and ate a RKO. Orton wins.

It wasn’t halfway bad. Nikki’s role was to be the bully. AJ and Paige did decent wrestling. AJ was down and Paige cradled her like a baby on the ground. Nikki cleaned house and did a Torture Rack drop on Paige. AJ interfered and then Nikki started to bully her and pushed her out of the ring. AJ tossed her from the apron to the floor and Nikki flipped over and landed on her back on the mats.

AJ got the Black Widow on and Paige tried fight it off. She got AJ’s leg off her head and looked to drop her, but AJ got the foot on top of her head again for the tapout.

The match was very similar to the first, except Cena got a few more hope spots when it came to Cena hitting the AA four times. Cena had Lesnar in the STFU in the middle of the ring and Seth Rollins came in and hit Cena on the back with the briefcase to disqualify Brock Lesnar.

Lesnar hit some vicious suplexes on Cena during the match.

Rollins wanted to cash in on Lesnar after hitting him with the curb stomp but Cena beat up Rollins before he could get in the ring. Lesnar gave Cena the F5 after Cena ran Rollins out of the ring.

Brock keeps his belt. Do we get a third Cena/Lesnar match at Hell In A Cell?