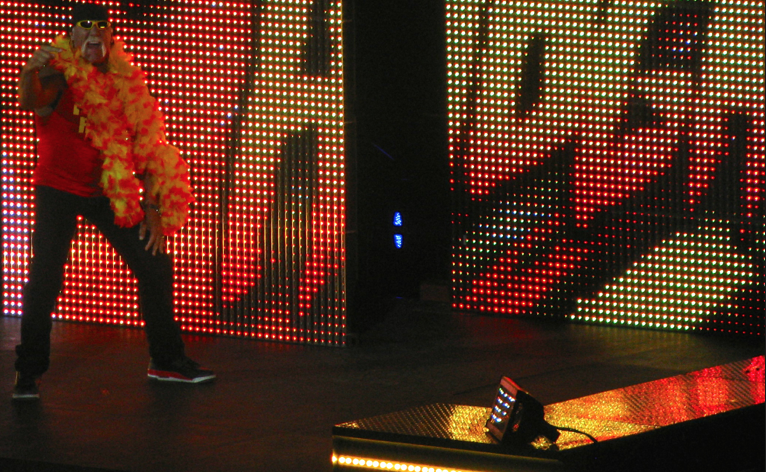 On the eve of SummerSlam 2014, the SummerSlam Heatwave tour came through San Jose, CA.

It wasn’t your standard WWE house show, at least in 2014. The last time WWE came to town, they ran a house show with their A crew, but it was very much lacking on star power. This show was more of a combined crew, though some of the wrestlers were in LA preparing for SummerSlam on Sunday.

WWE on the marquee is the draw these days with John Cena being the star to the childen, but the main draw to me was Hulk Hogan’s return to San Jose. It’s really the reason I decided to go (along with information on how to buy WrestleMania 31 tickets). I’m not exactly sure when the last time Hogan was at a show in the market, but the last time I saw him was at a Smackdown! taping on the go-home show for WrestleMania XIX. Yes, that’s over eleven years ago.

Ric Flair was also part of the crew as the referee for the Chris Jericho and Bray Wyatt match. His presence alone made the match better than their PPV match last month.

The story of the show from a wrestling standpoint was that guys were able to work on their SummerSlam matches tonight. Seth Rollins and Dean Ambrose opened the show and had a really fun match with many counters and Ambrose won with his finisher. They won’t be able to have the same freedom in their match at SummerSlam since lumberjacks will be involved, but if they utilize some of the spots they did tonight, the match should be really good. 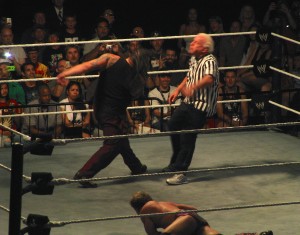 Chris Jericho and Bray Wyatt fine-tuned their match from the last PPV and like I mentioned above, it was much better on this show. At one point, Bray Wyatt mocked Flair’s strut, but then for some reason, he also did a terrible moonwalk, which was more PS Hayes, but hey. He and Flair did get into it once near the end, which set up the finish. Flair chopped Bray, but then ate a big right hand. As Bray was going to inflict more damage on Flair, Jericho hit the codebreaker and got the win.

Roman Reigns faced off with Randy Orton in what John LaRocca (Premier president and part-time contributor to Fight Game Blog) thought was the best match of the night. It may have been the longest match on the show and was nicely set up for Reigns to get a strong comeback and win. After watching Reigns wrestle long matches on Raw and now this, I find myself wanting to see less selling from him and more explosive offense. Shave 3-5 minutes off his matches and give him more offense. Then again, if they plan on him being a future champion, this is their style and he’ll have to get really good at it.

Speaking of getting really good at it, John Cena beat Kane in the main event. It’s not like I ever have to see these two square off again in my life, but they do have good chemistry together. The crowd was into it and it was the one match that was able to use plunder as the finish saw Cena hit the FU on Kane through the table after teasing the table for half of the match.

There was a young man and what looked to be his kid brother in front of me. The young man seemed to be a WWE fan from back in the day (he originally thought Bray was Mick Foley). He popped for Flair and Hogan, but he went crazy when Cena put Kane through the table. Kid brother was Cena fan to the max and they were able to share that together which was fun to watch. He looked back almost embarrassedly at me, but kept chuckling and said it was great and I agreed with him. Cena still gets the biggest reactions. 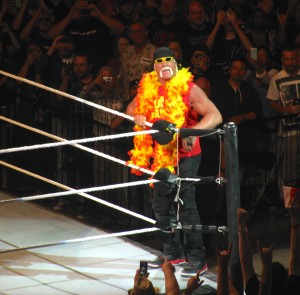 To me and fans who were closer to my age, our John Cena is still Hulk Hogan. And he didn’t really do anything special except what he normally does. He talked about WrestleMania 31 being in the Silicon Valley. He talked about the WWE 2K15 video game that comes out in late October. He talked about SummerSlam. And then he posed. And even though I’ve seen the posing deal in person several times already, it was the best thing on the show.

In other matches, Adam Rose with 5 rose buds (bunny included) beat Heath Slater (Rose is so much better when given time as he actually showed some fiery babyface potential), the tag team of Ryback and Cesaro lost to Big E and RVD when Cesaro was pinned after a 5 star frog splash, Rusev made Jack Swagger tap out to the camel clutch, and Natalya and Layla beat Paige and Rosa Mendez when Nattie made Rosa tap out to the sharpshooter. Poor Page and Layla had to do the spot where they rolled over on top of the referee.

Overall, it was a fun house show. I don’t think I’ve been to a WWE house show that fun since the mid-to-late 2000s when Cena and Edge were tearing it up the circuit.

There are a bunch of photos from the event on the Fight Game Blog Facebook page.