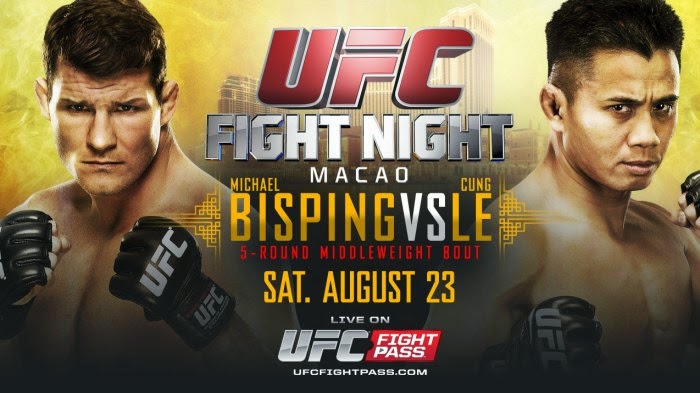 They should’ve titled this show, “Breakfast with UFC Fight Pass.”

I wouldn’t necessarily wake up at 6AM to watch a UFC show, but watching Cung Le fight in Macao could be interesting. And yes, I know he’s not Chinese.

The crowd got restless early in the fight. Jianping used great movement, but wasn’t able to effectively land much. Guangyou landed some knees and was using his wrestling which was enough to take the first.

Guangyou got a takedown and turned it into a guillotine which looked to finish Jianping, but he finally pulled his head out of it. That was just about the only offense in the round outside of Jianping’s leg kicks. Guangyou has this thing 2-0 so far.

Well, that was something. Both guys danced, threw a few punches and kicks here and there, and that was about it. Jianping probably wins for a couple of leg kicks that to hamper Guangyou. But neither guy really wanted to mix it up. It looked more like a choreographed dance than anything else.

Well, that wasn’t much better. Lipeng mounted O’Reilly after a bad takedown attempt. And then O’Reilly maneuvered to the top position. And that was all.

That was a solid round for Lipeng. He had O’Reilly down and once he got his back, immediately put him in a body triangle. He hung onto the body triangle for the rest of the round and worked for a rear naked choke.

The third round was similar to the second. O’Reilly’s mouth was busted and he was bleeding. Lipeng went back to the ground and the body triangle. He couldn’t finish him though.

Kim rushed him, but Woodley tied him up. Kim tried a spinning back first, but Woodley threw a right hand that might’ve been to the back of the head. It dropped Kim and he followed up with multiple right hands on the ground to finish him.

After Woodley’s last fight in which he was just the opposite of ferocious, he was a bit more ferocious here.

This was a pretty close round. Early on, Le was landing kicks, but Bisping was able to use his speed and length to keep Le at the right distance. When Le would get close, Bisping would pepper him with punches and when Le was further away, he used longer kicks to land.

Bisping landed a punch that made Le wince and it seemed like it was an eye poke. He couldn’t open his right eye. As he was having trouble seeing, Bisping opened up a cut on the other eye. Le fired up after the doctor checked his eye landing a right hook and two nice body kicks. He kicked him low on a side kick, but part of that was because Bisping jumped into it.

That was a really strong round for Bisping. Le has slowed to nearly a halt and is breathing heavy. Bisping peppered his face with punches and Le’s face is about three or four different colors. His eyes look terrible. Bisping has to be outlanding him three or four to one.

Thankfully, this one is over. Bisping overwhelmed him with a lethal punch combination with a left high kick. But it was a knee that dropped Le and Bisping followed him to the ground to finish him.

Winner: Michael Bisping by way of 4th round TKO