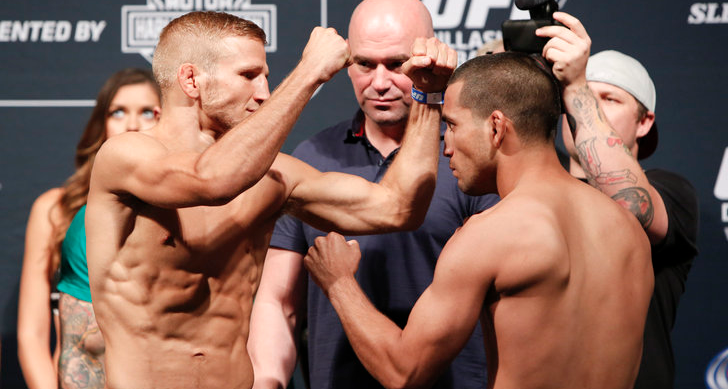 It wasn’t going to be a star studded event in the first place, but this took quite the turn for the worse.

Jackson is game and tried to make it a little rough, but Medeiros’ varied striking makes it his round. Landed a nice uppercut to the body, left hook to the head combo.

Medeiros grabbed onto a guillotine, Jackson tried to turn away, but it sunk into a deeper choke that resembled a side headlock. Jackson was out.

Winner: Yancy Medeiros by way of 2nd round submission

That was a close round. Nijem is winning the standup as Ferreira is a bit sloppy and wide with his punches. Late in the round, Ferreira wobbled him and went down to the ground to try and finish but Nijem lasted.

Nijem rushed in and caught a hook and went down. Ferreira finished him quickly. Might’ve been out on his feet.

Winner: Diego Ferreira by way of 2nd round TKO

Baszler was dogged in her approach with takedowns. She didn’t allow Correia to really get into any kind of rhythm. She’s going to try to grind it out.

Holy cow. Correia had Baszler up against the cage and just unloaded with a barrage of punches. Baszler wouldn’t shoot and seemed to try and tire her out. Didn’t work. She ate a tremendous amount of punches.

Castillo’s standup looks really good. He’s moving well in and out. Ferguson caught him in a D’Arce and he sat in it for a bit. He got out and Castillo was on top and landed a nice elbow that busted Ferguson open. Ferguson hit his own elbow from the bottom.

Great grappling in this round. Awesome transitions and though Castillo was on top a lot of the round, Ferguson did more off his back. I have it 2-0 for Ferguson.

Castillo may have grinded that round out. Lots of wrestling and keeping Ferguson on his back. I still have Ferguson winning the fight overall.

I think this was based on what people thought about the second round.

Lots of shuckin’ and jivin’ by Dillashaw throughout the round. Dillashaw is much quicker than Soto. But Soto is hanging in there. He won’t really let his hands go, but he needs to. Soto tried to take him down a couple times by catching his foot. Dillashaw is definitely trying to entertain.

Dillashaw is overwhelming him with a volume of punches like his last name is Diaz. Neither guy has landed that fight changing strike, but Dillashaw has comfortably won both rounds.

Dillashaw finally took him down, but when he went for his back, Soto went out the back door. More volume punching from Dillashaw. Soto has had some opportunities to land, but hasn’t really shaken him up yet.

It’s more of the same as Dillashaw is wearing him down. Looks like he can go 10 rounds.

Dillashaw finally caught him with a head kick that dropped Soto. He was about to Flair flop but Dillashaw followed up and finished him on the ground.

Winner: T. J. Dillashaw by way of 5th round TKO