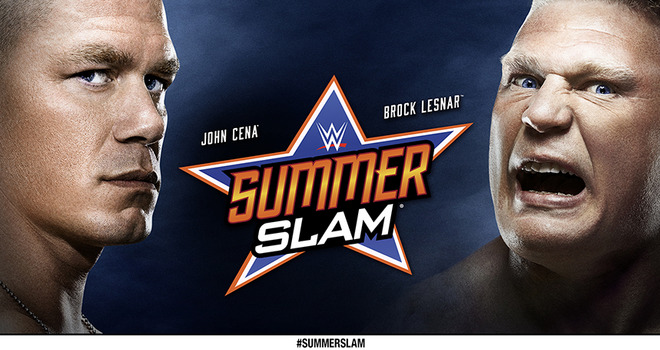 It’s time for the biggest fight of the summer.

I didn’t get to see the match, but according to Dave Meltzer, RVD won via 5 star frog splash clean.

Hulk Hogan came out to start the show and basically shill for the WWE Network.

2. The Miz Vs Dolph Ziggler

Nice opener and the crowd was really into Ziggler as the babyface. They worked at a fast pace. Miz put on the figure four and Dolph was in it for quite a long time. After getting out, he went for the Fame Asser and Miz somehow blocked it. He then hit the Skull Crushing Finale for a two count. Ziggler hit the Zig Zag for the pin.

They worked hard for the time they had. AJ pulled out one of Paige’s extensions and did a flying clothesline off the top rope and to the floor. She put Paige in the Black Widow but Paige got one of her arms loose, carried AJ into a fisherman’s suplex position and instead planted her with a DDT for the win.

Paige is the new champ. She planted a kiss on AJ’s cheek after the match.

They didn’t announce what a flag match was until the end. The winner would get their flag raised and their national anthem raised.

The match wasn’t anything to write home about, but again, these guys worked hard. Swagger got a little momentum and held the ankle lock for a while. Rusev broke out of it and hit the spin kick with his hurt ankle. He followed it up with a big splash and then the camel clutch.

Swagger didn’t tap. He passed out. After the match, Rusev laid out Zeb Colter. Then their national anthem was played.

The Four Horsewomen are in attendance.

What an insane match this was. The way to get around the lumberjacks being a hindrance was basically to escape them. Both guys escaped the ring and brawled through the crowd. Rollins tried to sneak out, but more lumberjacks were waiting including the Usos and Goldust and Stardust.

The carried Seth back toward the ring, but Ambrose dove on them. Ambrose was about to win. He was going for his finisher, but Rollins escaped and then Ambrose clotheslined him out of his boots. He curb stomped him before Kane interfered and then all hell broke loose.

The lumberjacks all came into the ring and it was like the fastest battle royal you ever saw. Amidst the pillaging and plundering, Rollins hit Ambrose with the briefcase and won the match.

Good match, but they couldn’t really follow the last match. This was more methodical and told more of a story.

Near the end, Jericho hit a codebreaker and Wyatt kicked out. He was supposed to clip the bottom rope with his legs, but he must have short legs. He went outside. Jericho went for the slide outside the ring, but missed and took the Sister Abigail against the barricade. He then hit it again in the ring to win.

Stephanie acknowledged the Four Horsewomen sitting in the front row.

This was a very acceptable wrestling match and they got a lot of time. It was typical psychology. Stephanie got all the offense early on, bullying Brie. Brie finally got her comeback and Triple H interfered. She put Stephanie in the Yes lock. Triple H pulled the referee out of the ring.

Brie did a diving dropkick through the ropes on Triple H and he took a big bump. Steph was trying to get to her feet. Nikki showed up and got into the ring to block Stephanie off. Brie cut her off on the other side. They both stepped to her and then Nikki sucker punched Brie.

Steph hit the pedigree on Brie to win the match.

The entire thing was very well done. Stephanie looked better in the ring than she’s ever before from a timing and believability perspective.

This was more of your normal main event WWE style match. Well, with Orton, you knew it was going to be a slower pace. The crowd seemed a bit tired from the previous match and angle.

Orton hit a sweet superplex from the very top rope early on. When it was time for Reigns comeback, he hit a Samoan drop from the top rope and a Superman punch. He set up for the spear, but Orton turned it into a power slam.

Reigns looked to set up the spear again, but instead was hit with a RKO for a 2.99 count. Orton went for the punt, missed, and Reigns finally hit a spear for finish. The end was booked beautifully.

Brock hit the F5 on Cena about 35 seconds into the match. Cena kicked out at two.

He hit four successive German suplexes on Cena and really threw him like he was a child. I don’t imagine that was good for Cena’s neck.

Lesnar threw him around a couple more times and finally, Cena landed some elbows. He hit two clotheslines, went for another, and Lesnar caught him for the F5. He got out of it and then hit the FU for a two count.

After he was laying down, he sat up like the Undertaker and started laughing. He landed punches from the top and asked the referee to ask Cena if he was going to quit. He then did four rolling Germans. Cena had neck surgery a few years ago right?

He did three more. I think the idea is to get sympathy for Cena. Cena got a Hail Mary with the STF, but Brock broke out of it. He threw more punches and hit a F5 for the win.