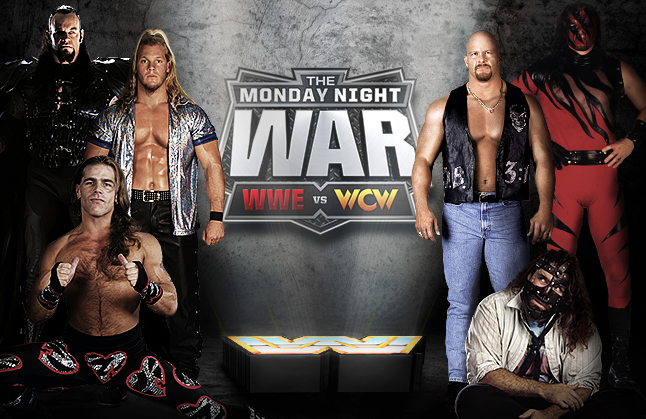 Literally one day after the second episode, WWE has dropped the third episode of the Monday Night War documentary series on the WWE Network.

With the second episode (which GG reviewed on Wednesday), the series shifted focus strictly to the early origins of the NWO angle and how it helped catapult WCW into a consistent ratings squash. With the third episode, the series goes over to the other side (the good side if you ask them) to tell the story of the WWF and Vince McMahon’s struggle and strategy to win back the Monday Night wrestling ratings war.

The early portion of this episode focused on the influx of new talent that came into the WWF in the mid 90s, including Steve Austin, The Rock, and many others who would become major players but at the time weren’t on that level and hadn’t found themselves as performers. Meanwhile, WCW led by the NWO angle, steamrolled the WWF every single week. We see the WWF poke fun of themselves and the “New Generation” era, as they tend to do, showing clips of Duke Droese and the Goon.

Aaaaand then we see the stooge of the 2004 Monday Night War DVD, Gerald Brisco. This is getting ugly already.

Monday Night Raw became and an edgier and more brass product, leaving behind the over-the-top cartoonish characters and goofy slop buckets, and pushed the envelope of controversy. The first major angle that was talked about was the Brian Pillman gun angle from the fall of 1996. The angle was deservedly criticized for crossing the line of good taste. Professional wrestling has always been violent and somewhat tongue-in-cheek, but when you bring a firearm into the picture, it goes to another level. You don’t see guys whipping out guns in other sports – real or fake.

USA Network laid down the (Bonnie) Hammer on Vince McMahon, who apologized for the angle on WWF Livewire. I popped for the Livewire clips. If you are reading this and you have never seen WWF Livewire or you started watching after 1997, I highly encourage you to seek out clips and episodes as there were a number of moments on that show that are surreal beyond.

(One time somebody called in and complimented Vince and JR for being good script writers. Yes this happened on WWF TV.) 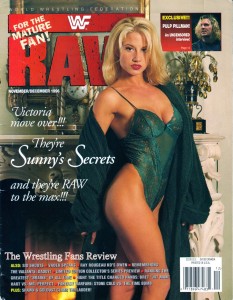 The WWF continued to push the envelope and focus on the young adult demographic rather than the kids, so things got more aggressive and “real”, including an emphasis on sexual jokes and profanity. Val Venis, Sable, DX, Sunny, and the Godfather all get their time to shine in this part of the episode. I was happy that Sunny got her own section because I’ve always felt she never got her due, which would be the springboard for the change in how women were pushed on the WWF TV. Puppies! Bischoff admits that he saw this and created the Nitro girls in response. WCW could never go as far because of “Standards and Practices” from Turner. This is the same excuse Vince Russo used, but that’s a story for another day.

Even though the “Attitude Era” was basically from mid 1996 to 2001, the year that most encompassed this change in direction was 1997, featuring not only the aforementioned profanity and sexual stuff (like Sunny dry humping Elmo), but also offensive, racist, and homophobic angles. Watch Raw is War episodes from September to November of 1997 and see what I mean.

What made the “Attitude Era” what it was is purely based upon the time period. Western society itself became rougher and the colorful campiness of the 80s and early 90s was fading fast. Cable television programming as a whole was starting to get raunchier and darker. See South Park. Violent rap music took the airwaves. Naturally, WWF caught on to this shift in pop culture and focused on anti-heroes as their top draws as opposed to white meat/clean cut good guys. This is precisely why the “Attitude Era” would never work anytime after 2001. It would no longer be innovative. Its time had passed, but boy was it fun back in 1997.

In a surprising twist, ECW was talked about and got their own little segment. They talked about how WWF took ECW’s more violent shenanigans and incorporated it into their more mainstream product; primarily the hardcore division. They also talked about the daredevil TLC matches. In the long term however, this style would be quite the detriment to the bodies of these performers, as even the heavily praised Mick Foley is, he will be walking with a limp and in pain for the rest of his life due to the absurd punishment he put on himself. Edge retired at 39. Of course, they don’t tell you that here. Sad but true.

You’re winning the war because you’re showing more of the TIT.

The documentary somewhat implies that The Rock was the guy who opened the doors for the talent to be more creative on their promos. I never saw it that way because it seemed more so that it was the Vince Russo/Ed Ferrara/Vince McMahon creative team that pushed that promo style. Ferrara has been noted as writing a lot of promos during this era, including that of Rock himself.

Meanwhile on WCW, the NWO angle began to get tiring with the same thing happening over and over with the same guys on top rather than pushing fresh talent. In retrospect, there were tons of situations where WCW could’ve told compelling stories, even with the same stars, and failed to do so. I’ve always felt that had a lot to do with it as well.

The final portion of this episode focused on Vince McMahon as the lead heel during the “Attitude Era”. Of course, they wouldn’t say that Bischoff had been the lead authority figure heel more than a year prior, but Vince was a more effective villain and more importantly, had the uber-hot Steve Austin as his protagonist. You can’t have a great bad guy without a great good guy and vise-versa. Raw finally broke Nitro’s 84-week streak of ratings victories, due to the Austin/Vince feud.

Cena says that the phrase “Sports Entertainment” was coined during the “Attitude Era”. False. It was about a decade earlier.

Some of my favorites appear here, such as Sexy Beth Phoenix (she looks soooooo good here), Bill Apter, Vince Russo, and Larry Z. As always, these are fun to watch and will probably continue to be fun to watch, but just be aware of the BS when you watch it. The things I found annoying were kept to a minimum unlike the previous two episodes of Monday Night War. There was much less anti-WCW nonsense here. WCW wasn’t painted as the villain and the hypocrisy was eliminated. There is still much more of the story to be told and I wonder how they’ll tell it, what they’ll focus on, and what they’ll leave out.