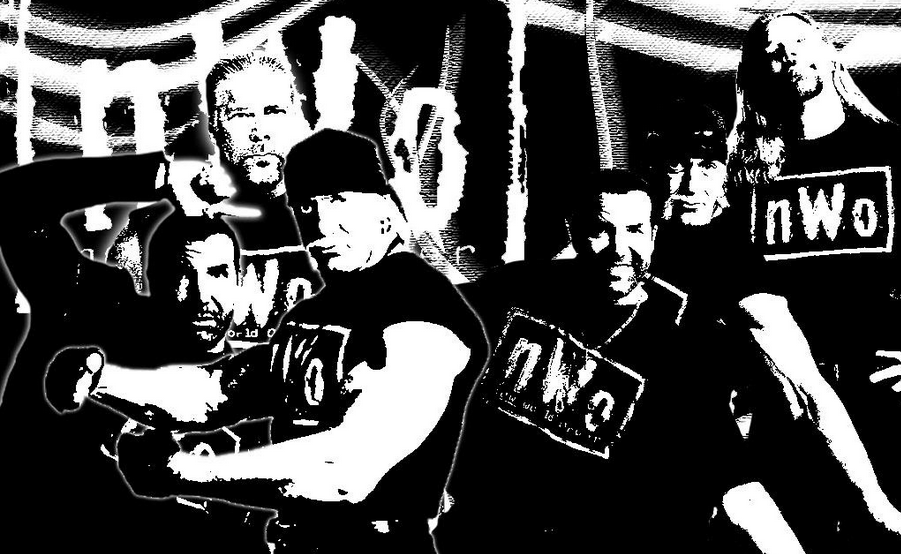 The WWE Network is starting to roll out the content. Here’s our review of the Monday Night War Episode 2.

Big D reviewed the first episode in depth and we’ll go back and forth on the rest of the episodes. Thus, I have episode 2 and he’ll be back with his review of episode 3.

This episode deals almost exclusively with the rise of the nWo. Where the show last left us, it looked like we were headed for the early days of Nitro vs Raw, but that’s not what happened. Either, they don’t consider the early days of the shows up against each other as part of the war, or they’re simply not going in any sort of chronological order.

As hardcore wrestling fans, we can nitpick these episodes to death. There are small factual things that they may get wrong either because WWE wants to get them wrong or simply because they aren’t fact checking. But my problem with the series thus far doesn’t have to do with nitpicky errors, it’s mostly that rather than tell the full history, WWE is tending to tell the narrative of what they believe the history should be. What makes the story more dramatic? What makes WWE more endearing? What makes WCW look more like the villainous group?

(Also, the Monday Night War was far more a Vince McMahon vs Eric Bischoff war than it was a Vince McMahon vs Ted Turner war. Turner had just about nothing to do with the wrestling end of things outside of opening his pocket book. He wasn’t telling Bischoff how to spend it. But he’s name dropped by both sides so much you’d think he had something to do with it outside of giving Bischoff the Nitro time slot.)

And that’s really the first part of understanding what the series is for. In this case, it’s to tell the story of when Scott Hall and Kevin Nash left WWE to go to WCW for monetary (and having to work less) reasons. The WWE Network tries to tell the story that the reason the angle was so hot is because it was WWE guys conquering WCW, which is to say that WCW fans really just wanted to see WWE stars on their product anyway. And I’m not sure that’s what happened. Kevin Sullivan even says this in part of his interview.

Instead, it was a mix of many things. Hall and Nash coming to WCW on a live TV show unannounced was cool considering they became stars in WWE. But it’s not like they were completely new guys. They’d been in the company before as gimmick wrestlers. It was so easy to suspend your disbelief when you didn’t know where something was going. It was crafted very well. And they teased it brilliantly. First it was Hall coming in seemingly unannounced. He promised someone. Then he delivered on that promise. And they promised another guy. And they delivered on that promise 10-fold. If this happened today, WWE would bring in Hall, Nash, and Hogan all at the same time and blow the entire surprise in one day.

But also, they were booked like killers. They always had the upper hand early on. Nash makes a great point in this episode that WCW was booking Hall and Nash brilliantly and making the entire company look badly in the process. They were holding off a big part of the roster just by themselves. They were the best babyfaces as heels.

In something that I’m glad they covered, they talked about how Jim Ross teased that Razor Ramon and Diesel were coming back to WWE. And when that was unveiled, it was Rick Bogner and Glenn Jacobs in the roles which is the exact opposite of delivering on a promise like WCW did with Nash, Hall, and Hogan. I believe that the reason JR was saddled with bringing them in was because it was thought that it would fail and this way, the heat would be on him.

Eric Bischoff talks about who the third guy was going to be. He wanted it to be Hogan, but Hogan didn’t want to turn. He said it would’ve been Sting if Hogan didn’t do it. The Ultimate Warrior was fired by WWE a couple of weeks before Hogan became the third man and he was rumored. (Originally, when Hall debuted, Dave Meltzer wrote that it was to lead to Hall against Hogan.) Lex Luger was also heavily rumored. I remember during this time in the early days of wrestling fans having access to the Internet, Yokozuna and King Mabel were the guys heavily rumored to be the third guy. King Mabel? Really?

When it became Hogan, he proved the be the smartest man in wrestling again because according to Meltzer, his contract was expendable at the time as he was less and less valuable. I’m not going to try and rewrite what Dave wrote at the time.

In the July 15th, 1996 edition of the Wrestling Observer, Meltzer wrote:

Hogan had agreed to do the heel turn about 11 days before the show, largely because there was no place left in WCW for him had he not chosen to do so. Hogan’s contract with WCW was scheduled to expire after two more PPV shows, the “Hog Wild” show in Sturgis, SD next month and “Halloween Havoc” in Las Vegas where, by virtue of a sponsorship deal with Slim Jim’s, they had long promised a Hogan vs. Randy Savage main event. Since WCW largely focuses its company around Monday night television ratings and PPV buy rates, Hogan’s huge contract became expendable. Since Hogan doesn’t work arena dates, his staying or going isn’t a factor on them. In Hogan’s usual great knack of timing, he left WCW to do a movie with Roddy Piper and Gary Busey just before the NBA playoffs changed the Monday Nitro time slot and wreaked havoc on the ratings, which appeared to be a great leverage move. However, in the expansion to two hours, the show’s ratings have increased to their consistently highest level to date with Hogan not on any of the shows. This weakened his leverage position as compared with Bischoff’s in negotiations to stay at his incredible money deal. While Hogan has continued to draw much stronger buy rates than WCW has averaged without him, although the gap between those sets of numbers has declined as time has gone on, the belief is the new program with Nash and Hall was hot enough and would draw basically as well with or without Hogan. Thus Hogan’s huge cut of the PPV revenue would no longer be worth it. But in the end, Hogan proved to be the ultimate fox once again, in that this angle on the surface appears to be the hottest angle in the history of WCW, and Hogan, who a few weeks ago looked like the real outsider, maneuvered himself back into being the centerpiece.

On the production end of things, there is one thing that frustrates me (and maybe more so than most). I know they’ve done interviews for all their shows at different times. But why do I have to see three different versions of Kevin Nash on this show? We see the Kevin Nash in the ring. Then we see a Kevin Nash in a pony tail talking about the nWo. And then we see the silver fox version of Kevin Nash with short hair talking about the nWo. I think they should only take interview portions from one sitting. It looks very Mickey Mouse otherwise.

The last 10-20 minutes seemed to lag big time. It’s like they couldn’t figure out how to end it. The nWo was huge, but this wasn’t the rise and fall of the nWo, just the rise. So they couldn’t show how badly it had gotten near the end. But they also didn’t have a natural stopping point. But I’d say that the first 40 minutes or so was entertaining as long as you could deal with the way the story was being told.

I’m interesting in seeing where they go, but I’m also kind of scared. I have a feeling this show will get ugly very soon.