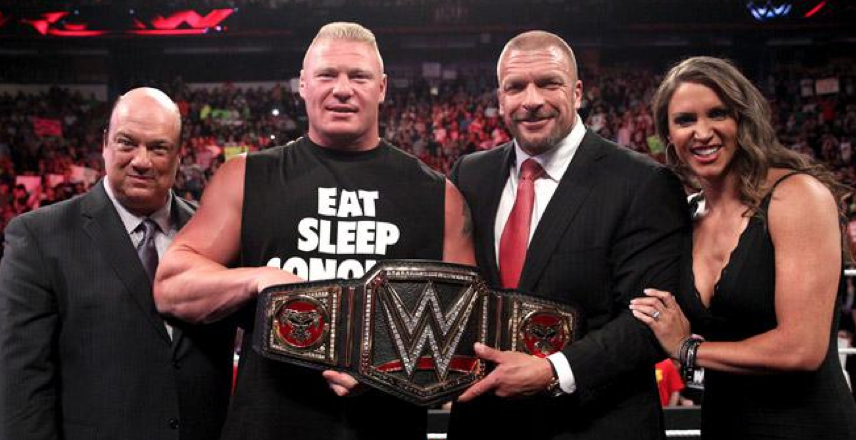 The post-SummerSlam Raw didn’t really push any storylines forward, but thanks to Seth and Dean, it ended up being a decent enough show.

I think they wanted us to believe that.

Earlier in the show, Dean Ambrose poured water on Seth Rollins’ head during an interview as a reference to the ALS Ice Bucket challenge that is taking over social media. WWE only wishes they could get something like that to go viral.

By the way, I thought Vince McMahon’s video was the best one, though Stephanie wins on star power.

Back the Rollins and Ambrose, Triple H booked them in a match in which the stipulations were going to be decided by the WWE Universe. The options were No Holds Barred, No Disqualification, and Falls Count Anywhere. If fans aren’t dumb, they’d pick Falls Count Anywhere and thankfully, they did.

The match was nuts. They destroyed each other. Seth powerbombed Dean onto a bunch of chairs. They went all over the arena. Ambrose hit the dirty deeds for a two count, but the two count was ruined because Rollins was staring at Kane to break it up before he did. Kane chokeslammed him on the announcer’s table and it didn’t break. Rollins did the curb stomp on the same table that didn’t break.

And then it got a bit silly. Kane unveiled a stack of cinderblocks. He placed Ambrose’s head on the blocks and Rollins every so gently curb stomped him on the blocks and they turned into powder. They almost ruined a crazy insane match. My guess is this explains Ambrose being gone for a bit to shoot a movie.

Ambrose is the most over babyface they have right now.

Brock Lesnar gets a new belt.

Last night after winning the WWE World Heavyweight championship, Brock told TMZ that he didn’t want to carry two titles. And he got his wish.

Triple H and Stephanie gave him the new undisputed title which kind of looks like the previous WWE title that Rock unveiled in 2013. Lesnar, Paul Heyman, Triple H, and Steph took photos together with the belt and then Steph and Triple H left.

Heyman cut another passionate promo which put over Cena and then Lesnar even more. The only thing wrong with it is that there wasn’t even a tease for Brock’s challenger at Night Of Champions. I’m not sure how many more Raws Brock will be on until the PPV, if any. And who will it be? Will it be Chris Jericho? Will Batista come back? Do they turn Randy Orton which they didn’t really tease, but Ric Flair did try to talk to him. I really have no idea. And I kind of like it that way. But we should’ve seen at least a tease tonight.

– Stephanie came out wearing her new “Steph, Steph, Steph” shirt that looks like Daniel Bryan’s “Yes, Yes, Yes” shirt. She even did his sideways shuffle for her entrance. She said that the main loser of SummerSlam was Brie and Nikki came out. As good as Steph was, Nikki was just as bad. Instead of referencing Brie being selfish causing the Authority to put her in handicap matches and getting her ass kicked every week, she took it back to childhood. Basically, Brie was always competing with her. It was a very weak reason. Brie came out and Nikki slapped her.

– Big Show and Mark Henry beat Luke Harper and Erick Rowan with the punch into the World’s Strongest Slam.

– They have no idea where to go next with AJ and Paige. Paige had a match with Natalya. AJ came out and skipped around. Paige watched her. Natalya rolled her up for the win. AJ said she loved Paige and dedicated her life to her.

– Miz beat Dolph Ziggler by count out as Ziggler couldn’t get back in the ring because of his knee. Well, he could’ve, but he kept trying to fight Miz who was on the apron. Kind of made him look dumb.

– Jack Swagger told Rene Young that he wants his country back! Okay, he didn’t really. He just said he disappointed his country. And then he disappointed us some more after losing to Cesaro. Bo told him to Bo-lieve. There’s nothing worse than Bo coming out after your match is over these days.

– Jericho and Bray Wyatt didn’t wrestle on the show, but both had interview segments. Jericho’s a fighting babyface. Wyatt is the new face of salvation.

– Oddly, Rob Van Dam got the pin on Curtis Axel to win the fall for the trios match. RVD, Roman Reigns, and Sheamus faced Orton and Rybaxel. Reigns hit the spear on Orton, but was pushed away by Axel. Not sure why it was booked that way unless RVD is the one getting fed to Brock, but he’s been beaten so many times recently that it can’t be him.

– Goldust and Stardust beat the Usos with a sunset flip. Really.

– Mark Henry interrupted Rusev and Lana’s celebration and then beat Rusev up.

The show was on a treadmill as far as the storyline progressions were concerned, but Ambrose and Rollins tore it up in the end to make their match worth the wait.