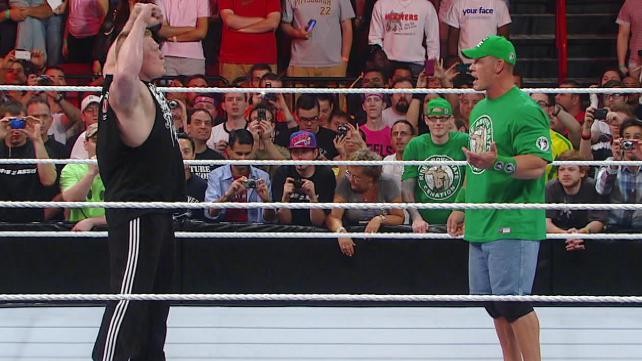 The key to this Raw was for John Cena to make sense of him not being dead and why he wants more.

Hulk Hogan, Ric Flair, and Shawn Michaels opened up the show doing something similar to a legend’s roundtable and discussed whether or not John Cena has a chance against Brock Lesnar at Night Of Champions.

Michaels and Flair were pretty sure Cena was losing, but Hogan re-watched their 2012 match and thought Cena would find a way to win. Neither of the three legends was charismatic and the segment wasn’t good.

Cena came out and tried to make it better. He understood why Michaels didn’t think he would win, but he was tired about what people thought he should do or not do. He said he wasn’t going to beat Brock Lesnar. He was going to beat his ass.

There were a few issues with this segment, but it comes down solely to whether or not John Cena should even be on Raw at this point. I’m not too sure the match is the right one, but even so, I think it would’ve been better for Cena to be off TV for this week specifically, shown in a dark place the following week, and finally challenge two weeks before the show. At least that way, there would be progression to the storyline rather than what it is today which is: John Cena gets killed and shakes it off because, well, wrestling is fake.

Brock Lesnar was more effective in a four minute video than Cena was on two long TV segments.

At points this was decent, at others it was way too long and forced, and for a short while, it was good.

Jerry Lawler hosted a segment where the Bellas were going to have a face-to-face conversation. Brie spilled her heart out to Nikki, apologized for leaving her when she was fired, and said that when they were in the womb, they were actually holding hands. Nikki pretended to be touched and then started yelling while Brie cowered. For a minute, it was okay, but Nikki kept piling it on which meant Brie had to pretend cry for much longer than necessary.

Finally, Nikki flipped out and pushed Brie off her chair, grabbed her hair, threw her shoes at her, and screamed that she was dead to her. The physicality was quite good, but the rest of it was not that good. If the people just remember the beat down, it should be remembered okay.

– They promised 100 hours of Nitro on the network soon which, if starting in order, should be the first year of Nitro plus.

– Rusev beat Jack Swagger in a really good back and forth match. The match had to be stopped because of Rusev’s ruthlessness, but Swagger got in some cool hope spots. I thought this finish was much better than the SummerSlam finish. Bo Dallas made fun of Swagger again before Swagger did a run-in after Bo’s win over Kofi later in the show and power slammed him.

– Cesaro beat RVD to become the number one contender to Sheamus’ US title.

– Paige beat Natalya before AJ could distract her this time. When AJ distracted her, Natalya gave her a sucker clothesline which was heelish. Then AJ kissed Paige’s hand confusing her. I’m finally starting to understand this. Paige was trying to pretend to out-crazy AJ, but you can’t out-crazy the crazy.

– Libertarian Kane and Seth Rollins had a eulogy for Dean Ambrose who is still missing after getting his head put through the cement block. Rollins said that if Dean just knew his place, he’d still be here. Roman Reigns came into the ring through the crowd and beat up Rollins something fierce after taking out Kane first. This set up a handicap match later which Reigns won by DQ only to them beat the crap out of both guys again after they tried to Ambrose him.

– Stardust and Goldust beat the Usos by count out and then jumped them after Goldust thought they were counted out on purpose.

– Dolph Ziggler beat the best version of the Miz, which was Damian Sandow playing Miz as his body double.

– Oddly, they did the hard sell on the WWE Network premiere of the Jeff Hardy documentary from his 2009 DVD.

– Cena first faced off against Bray Wyatt and he just killed him. The Wyatt Family came out and Big Show and Mark Henry evened the odds. It turned into a 6-man and Cena beat them all up. He made Luke Harper tap with the STFU. Then he hit the FU on all three guys and laid them out. Really, he should’ve faced all three in a handicap match. There was no need for Show or Henry.