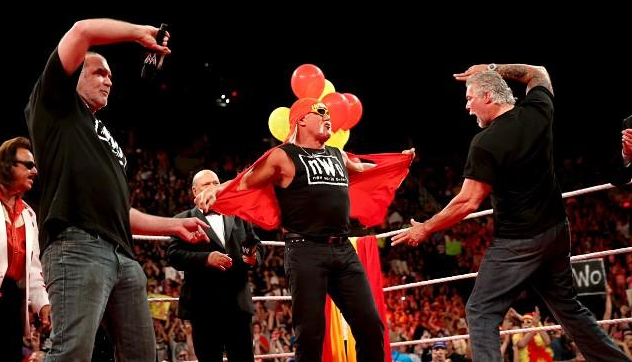 Not only was it Hulk Hogan’s birthday celebration; it was also the go-home show for SummerSlam.

I guess WWE sure learned not to close with Stephanie McMahon berating Brie Bella as the last two weeks they did that, the third hour rating dropped. Instead, they turned to the Hulkster and his friends.

All day long through social media, WWE reminded everyone of Hulk Hogan’s birthday party celebration on Raw. While it was the go-home show for SummerSlam, they pulled out their big guns to hopefully secure a strong rating going into the show.

Like they often do, they ran out their legends to help get eye balls on the product and get people to subscribe to the WWE Network. They hit the $9.99 price tag ad nauseum again including getting Hulk Hogan to use it in his, “Whatcha gonna do” promo.

The Raw set featured red and yellow wrapped gifts on the stage, which was quite weird since John Cena’s new colors are red and yellow. I wonder if any new fans simply wondered if it was for Cena.

The celebration was the closing angle for the show. Jimmy Hart and Mean Gene were in the ring before Hogan came out. Much of the roster was on the stage while Hogan came out. They showed a cool historical video, which sadly they didn’t put online. The Nature Boy Ric Flair came out. Sadly, they didn’t give Slick Ric the mic. Then Mr. Wonderful Paul Orndorff came out with his handle bar mustache. Roddy Piper was next and then the Outsiders, Hall and Nash came out.

Out of all the legends, who did they give the mic to? Well, of course they gave it to Hall and Nash. Hall did a survey in which the crowd decided that black and white Hogan was cooler than the red and yellow. So Hogan took off the red and yellow shirt and had the nWo shirt on underneath. What a bunch of lemmings the crowd was. Nash then sang Happy Birthday to Hogan.

It was interrupted by Brock Lesnar coming out.

John Cena cuts the money promo of his career.

Okay, maybe that’s a bit generous. But it was the promo that you hoped he cut more often then he does. Before we get there, there was a huge build up to it.

He said that when Cena faced Brock at Extreme Rules in 2012, he was facing only 50% of Brock Lesnar because of his diverticulitis illness. He said Brock was 100% now.

Cena came out later in the show and wasn’t the shuckin’ and jivin’ Cena that upsets fans who are interested in serious conflicts. Cena put Brock over huge, but was confident he would win. Then, he acknowledged the fans who dislike him and want him to be more serious. He referenced the people who want him to turn heel. He said that in order to beat the beast, you had to become a beast. And he said all the fans that wanted him to become something he wasn’t would get their wish on Sunday.

(Of course, WWE only cuts the part of the promo that was corny and puts it on YouTube. Jeez.)

After Lesnar came out to interrupt Hogan’s celebration and called Hogan grandpa, Cena sprinted the ring and challenged Lesnar to throw down in the ring. Lesnar thought better of it as Heyman told him to leave the ring. Plus, I’m not sure he wanted to get poked in the eyes by Piper.

Cena was legitimately on fire daring Brock to fight him.

(After watching both men do this for the last few weeks I wonder if this should’ve been the actual WrestleMania 31 main event. I can’t imagine Roman Reigns being at this level in just 7-8 months.)

McMahon vs Bella takes a turn for the weird.

Well, they sure peaked early.

I will put the blame on this one to simply having too much time. Stephanie came out with Daniel Bryan’s therapist who she called Megan Miller. As the story goes, Miller and Bryan had an affair and Stephanie was there to tell the wrestling world. Brie came out with fire coming out of his nostrils and went face to face with Miller while Stephanie kept talking. She eventually slapped Miller after Stephanie said that Miller told her Bryan called Brie a dead fish in the sack. She also played on Bryan’s yes chant as if Bryan and Miller were having such good sex that Bryan used his own gimmick in the bedroom.

Brie then speared Stephanie and put her in the Yes lock. Stephanie challenged her to a match later in the show.

But the match never happened. Instead, much like happened to Stephanie a few weeks ago, Miller pressed charges which meant Brie was arrested.

I didn’t mind the performances, but the storyline was idiotic. It was a copy of TNA’s Claire Lynch angle which ended as the lamest storyline of last year. Why copy something that reminded anyone of that? Had they built to Brie putting the Yes lock on Stephanie after Stephanie got one over on her two weeks in a row, it would’ve been enough. But now? If Brie doesn’t win, she’s the worst babyface of all time getting one-upped week after week.

– Kane is back to wearing a suit and put Roman Reigns in a handicap match against Rybaxel, which he won by disqualification and then speared them both out of their shoes afterward. Rene Young interviewed him and he made a lame analogy of defanging the viper and turning him into a worm. Stephanie can give faux orgasms but Roman can’t say anything edgy?

– Seth Rollins beat RVD and afterward saw Hogan’s red and yellow wrapped gifts and was suspicious and his suspicions were right. Ambrose broke through the one of the gifts and attacked Rollins who high-tailed it out of there. Last week I wrote that if Ambrose didn’t make the stipulation with something having to do with Rollins’ briefcase he was an idiot. Well, he’s an idiot. His stipulation is that they’re going to have a Lumberjack match which simply means everyone gets to be on the show.

– Jack Swagger beat Cesaro via submission setting up his flag match with Rusev at the PPV. I guess Cesaro gets to be one of the lumberjacks.

– Bray Wyatt and Chris Jericho were about to be interviewed by Michael Cole in a seated setting. Wyatt sent Cole away and he simply walked away. There wasn’t much to what either guy said. Jericho wanted to be the first guy to shut him up for good. Please do. I’m so tired of Wyatt’s promos.

– Eva Marie beat AJ when Paige distracted her. Paige presented a poem to AJ. After the match and Paige’s promo, Eva was outside the ring on one knee holding her neck. Why? She couldn’t have gone to the back and gotten ice? AJ saw her and beat her up.

– Heath Slater beat Dolph Ziggler by count out as he got into a tiff with the Miz who was doing commentary.

– Randy Orton beat Sheamus after hitting the RKO as Sheamus was trying to hit the flying shoulder tackle on him.

The wrestling wasn’t good again this week, but really, I didn’t care much. That’s what I’m buying the PPV for. I thought the main event angle was excellent and since that’s what the show is being sold on, that’s most important. The Stephanie/Brie angle went on one week too long. I haven’t been impressed at all with the build for Reigns and Orton. And I thought Ambrose and Rollins was hotter last month before they pulled the match. But really, the main event angle was too strong for me to hate on this show.