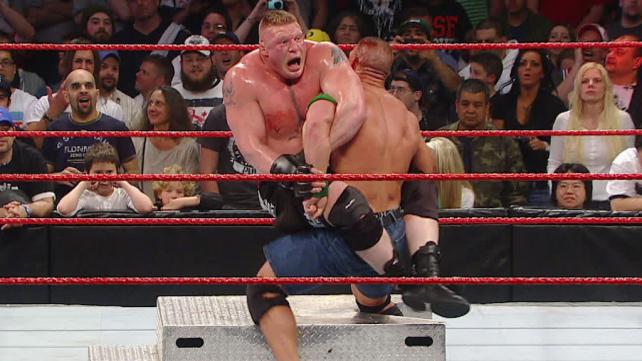 John Cena, Brock Lesnar, and Paul Heyman weren’t at Raw live. Yet, they were most effective in the main event build up.

Since neither man was there to promote the SummerSlam main event, WWE had to get creative. And creative they got. They sliced and diced recent interviews from Cena and Lesnar into two video packages that were excellent in whetting your appetite to see them in the ring together. And the build isn’t that they’re going to have a match. It’s that they’re going to have a fight.

If there’s a main event that can move the needle during the non-WrestleMania months, this one has to be it. While I’m not sure it will do that because of many factors including the debacle that is the WWE Network, this is match is much better booked than last year’s SummerSlam double main event (though, it’d be hard to top both of those matches).

Even though last week’s really good main segment actually lost viewership, they decided to use Stephanie and Brie in the main event segment yet again.

They closed the show to sign their contract for the match. Triple H came out with Stephanie and Nikki came out with Brie. Brie’s presentation of her promo was super deliberate to where she nearly annunciated every syllable. Her cadence was so slow that she must’ve been super nervous. However, she said she was going to embarrass Stephanie for how the Authority has treated people like Daniel Bryan, the Big Show (who even remembers that angle?), the Rhodes Brothers (she should’ve mentioned Dusty) and everyone else who they’ve reigned over.

Stephanie nearly turned babyface by saying that Brie is a reality TV show wannabe who stole the limelight from her sister and Steph is embarrassed just being in the ring with her. They both signed the contract. Steph conked Nikki in the head with the leather folder holding the contract. Triple H pushed the desk backward toward the corner which trapped Brie. With the recent Ray Rice stuff, I’m not sure I would’ve done that. Steph hit the pedigree on Nikki and started with the Yes! chant. Brie slapped Triple H to get out of the corner but Steph slammed her head against the desk and gave her the pedigree as well.

Stephanie’s performance out-shined Brie’s here big time and they better be careful or else Steph will be turned at SummerSlam.

Because they paid so much attention to what it seems they believe will draw the viewers for the PPV (it very much looks like Steph and Brie is the semi-main), two of the bigger matches coming out of the last PPV have been given lame builds.

Seth Rollins and Dean Ambrose were given the lame beat the clock segment. Roman Reigns faced Kane yet again early in the show and then was never seen again before the live crowd after beating him in a Last Man Standing Match.

Between Seth and Dean, whoever won their match in the fastest time would be able to choose the stipulation for their match at SummerSlam. Ambrose beat Alberto Del Rio in just under 16 minutes, making you believe that Seth had to win. Seth was supposed to face Rob Van Dam, but was instead given Heath Slater. Ambrose was at ringside and thanks to his distractions, Rollins actually lost the match.

If Ambrose picks any match other than that the winner gets the briefcase, he’s an idiot.

– Triple H oversold the WWE Network and its $9.99 price so much that it grated on your nerves. And since when does the heel sell products? It was idiotic.

– Mark Henry returned, beating Damien Sandow. I guess he’ll be babyface for a few weeks until he turns heel again.

– Adam Rose looks like a worse jobber each and every week.

– Rusev beat Sin Cara in a match that was entirely on the WWE App. Lana cut a promo on Obama which brought out Zeb Colter and Jack Swagger. Swagger and Rusev squared off and Rusev got the best of him, sending him outside. Rusev and Lana had Zeb cornered, but Lana showed some restraint and let him off the hook.

– Diego beat Fandango in a match no one needed to see.

– Bo Dallas beat R-Truth in another match no one needed to see.

They got two things really right tonight. But really, nothing else was paid enough attention to. And there was so much drek that you could’ve fast forwarded through the show quickly enough to watch it in 90 minutes.