And the new Premier Heavyweight champion …

In the main event of Premier’s sixth event, challenger J. R. Kratos beat champion Jeff Cobb in a bit of a surprise. I say surprise only because Cobb had been champion for over a year (427 days to be exact) and I thought we’d see a rematch between he and Dave Dutra, who he beat for the title and who is also now the number one contender after beating Sledge in a grudge match.

That’s why they play the game (or have the matches).

The match between Kratos and Cobb resembled a fight more than it did a wrestling match at times. The first five or so minutes was spent on the ground and Kratos had the advantage for a lot of the match. It picked up with less than five minutes to go and I fully expected Cobb to hit his reverse power slam for the finish. He did hit it, but the massive Kratos kicked out, got out of the way of Cobb’s followup frog splash, and hit his own sit down powerbomb finisher for the win.

After the match, Kratos said it was the era of Kratos. “Double D” Dave Dutra, who beat Sledge in the semi-main event, came out and they had a face-off. They are 1-1 each in Premier and will headline the next event for the title in the rubber match. A date is expected to be announced soon according to president John LaRocca.

Dutra vs Sledge started to pick up a bit of steam last week as they both cut promos on each other, which you can find on Premier’s Facebook Page. 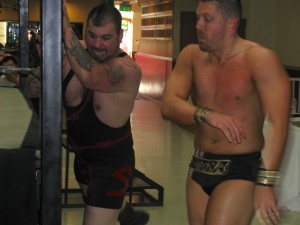 Much like Cobb and Kratos, the match resembled more of a fight at times with nasty chops and forearms given and taken by both men. The action spilled out to the floor a couple times, giving the fans in the front row at the I F D E S Lodge-Portuguese Hall in Gilroy, CA an even closer view.

Dutra won with a DDT that planted Sledge and secured his number one contender’s spot. After the match, he said he had issues with both Cobb and Kratos, so he didn’t care who won.

In a special attraction bout, Nicole Savoy, who was in Premier’s first ever women’s match (and injured her hamstring during it) was back to face Ruby Raze. The match was worked around the arm bar, like how you’d expect a Ronda Rousey pro wrestling match to look. Savoy locked the arm bar on a couple times before finally getting Raze to tap out. It was the last of three submission victories on the show.

Earlier in the show, Buddy Royal beat Will Cuevas with a Figure Four after working on his leg for much of the match. Cuevas replaced The Almighty Sheik who had to pull out of the show. Cuevas worked previously as a referee and this was his first match on Premier. Dylan Drake also made John “Dynamo” Redito submit to his Sharp shooter.

Fan favorite (and Mount Pleasant High School graduate like myself) Marcus Lewis beat Premier newcomer Dom Vitalli with a 450 splash from the top rope. Lewis has been on quite a roll and looks to be moving up in the ranks. I would love to see him face one of the bigger guys in a David vs Goliath type of match up. 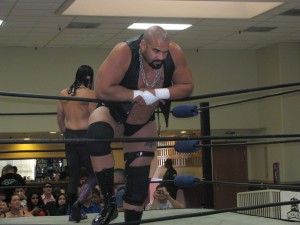 Big man Gabriel Gallo, whose presence can be better described in the photo to the right than anything I can write, beat Jeckels. Gallo sort of resembles Kratos, but works a much more methodical style (at least in this match). I really enjoyed his work.

Wise guy Nick Ruiz beat Tyler Bateman and in the opener Julio Pedroza beat Idris Jackson in the battle of the headbands (or do-rag in Pedroza’s case).

Overall, like every Premier show I’ve been to, it was well worth the price of the ticket. Last week on Raw, WWE hit you over the head with the $9.99 price of the WWE Network as if the value is a no-brainer. Premier’s $15 (or $10 if you pre-purchase online before the show) ticket price is truly the best bargain and no-brainer in wrestling for anyone in the Bay Area.

Check out photos from the event on our Fight Game Blog Facebook page.

As promised, here is the last few minutes of the great main event.