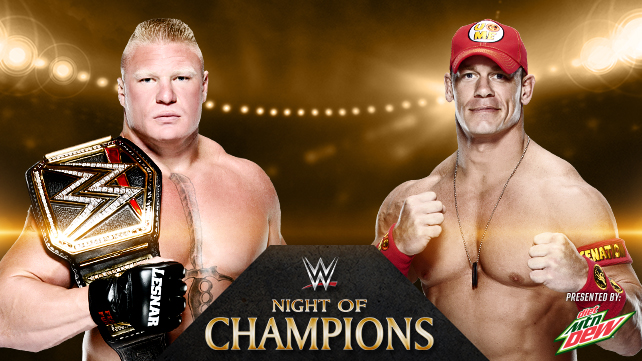 They didn’t hint at a new contender for Brock Lesnar on Monday’s Raw. But WWE decided to announce the main event on their website.

I’m not quite sure why they couldn’t wait until Monday to announce it and make for good television. But it’s not necessarily a rematch that needs to happen based on the booking of Lesnar destroying Cena.

The worst thing that can happen is that Cena wins the rematch and Lesnar goes away until the Royal Rumble. They have something here. When’s the last time you’ve had a heel champion simply destroy the number one babyface? That should be the story until whomever beats Lesnar at WrestleMania.

The story shouldn’t be that in his second match, Cena miraculously goes toe-to-toe with the man who annihilated him already. Lesnar should continue to go through veteran stars with name value who won’t get hurt by being squashed.

Randy Orton could get some offense against Brock, but eventually lose decisively and he wouldn’t be hurt a bit. Same with someone like Chris Jericho if he decides to stick around more in 2014 or come back in 2015. Someone like Batista could effectively give him a better match than Cena because he’s bigger and also has one MMA match. Shawn Michaels would be perfect if they could ever entice him to come back as would Daniel Bryan when he’s healthy.

Brock beating John Cena again should work fine, but I can’t imagine Cena will be beaten like he was at SummerSlam. And that hurts what they’ve done slightly.

Even though it wasn’t necessarily the match I wanted to see, I’m still intrigued at how they’ll continue to book Brock Lesnar. Let’s just hope they have it together enough to understand that Cena can’t win the rematch.