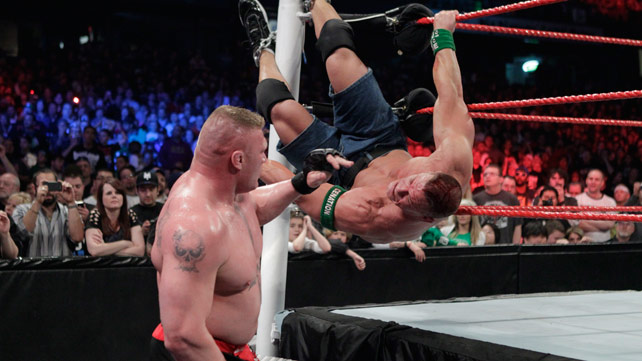 With their third PPV singles match this weekend, we look back at the second Brock Lesnar vs John Cena PPV match which happened just over two years ago.

Nearly nine years after their first PPV match, John Cena and Brock Lesnar locked horns again. But things were much different this time.

In 2003, Lesnar was one of the top dogs and Cena was trying to earn a top spot. In 2012, Cena was the top dog, yet Lesnar rejoined WWE as the second or third best PPV draw in all of PPV as an ultimate fighter. Much like he’d done with The Rock, Vince McMahon brought Lesnar back to a large money deal with very few dates to try and break the bank on PPV.

However, it didn’t quite work that way. Instead of holding off the Lesnar vs Cena match until SummerSlam when they would’ve been able to make the most bang for their buck, they immediately started the program the day after the first Rock Vs Cena WrestleMania match which is the highest grossing show they’ve ever done.

It would be Brock’s first WWE match since his match at WrestleMania XX against Bill Goldberg. He was able to make a deal with WWE to wear sponsored gear like he did in UFC, including wearing MMA shorts for the match. He came across as the real deal.

The goal should’ve been to have him beat Cena and run rough shod through the WWE wrestlers in brutal fashion before someone could courageously beat him at WrestleMania. It didn’t happen that way. Instead, Cena beat Lesnar on day one and it definitely has had an affect on his drawing power. Imagine how different the impact would’ve been when he beat the Undertaker earlier this year if he was undefeated in his return before that match.

Interestingly enough, Paul Heyman was nowhere to be found. Instead, Lesnar came in because of John Laurinaitis in storyline.

The match itself was tremendous. It’s probably the most physical match in WWE history. Lesnar beat on Cena forever and Cena took an insane amount of punishment.

Here’s what Dave Meltzer said about the match at the time:

Cena vs. Lesnar had a level of suspension of disbelief that no WWE match has had in years, not even the Cena vs. Punk match (Money In The Bank in Chicago) came close.

Not too many people remember the aftermath of the match, but Cena cut an interview after the match that seemed like one you’d do at a house show, not at the end of a grueling PPV match. It made it seem like Cena was leaving for some time. Brock felt double crossed because the promo wasn’t supposed to happen and he was angry. There was worry that Brock was quitting (which would’ve made Cena winning the right decision, by the way).

Watch the match below. If they can top this, SummerSlam will be well worth the $9.99 purchase.