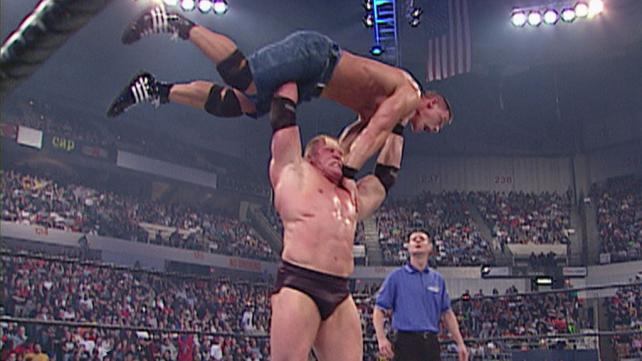 John Cena and Brock Lesnar are set to meet for the third time on PPV in a singles match this Sunday. Let’s look at the first time they did battle on PPV.

On the WWE Network original special SummerSlam Prelude to Lesnar Vs Cena, Paul Heyman had this to say about Lesnar and Cena.

In 2002, it’s hard to believe this story (you might even call it a fairy tale) began 12 years ago. Once upon a time, two rising stars would enter this fabled ring for the very first time. One man. One beast.

He went on to say that just as quickly as Brock’s ascension to the top happened, he was gone. And in his place, John Cena became one of the greatest WWE wrestlers ever. And then, the beast came back.

At WrestleMania XIX, Brock Lesnar became the WWE Champion once again, beating Kurt Angle in the main event. His next PPV match was scheduled to be a title defense at Backlash. Stephanie McMahon scheduled a tournament to determine the number one contender and surprisingly, John Cena won the tournament. In the first round of the tournament, he beat Eddie Guerrero. In the second round, he upset the Undertaker thanks to interference from the Full Blood Italians (FBI). And in the finals, he beat Chris Benoit.

(I was at the last Smackdown tapings before WrestleMania XIX and there was a dark segment with Lesnar and Cena brawling which made little sense to us live, but seemed to be a precursor to the title defense.)

Before the match, Cena came out wearing a Yankees jersey to give him as much heel heat as possible since they were in Worcester, Massachusetts. Cena was born in West Newbury, Massachusetts.

Lesnar wasn’t as over as you’d expect him to be for the match. Some of it probably had to do with the fact that their match was overshadowed by the triple threat tag match between Triple H, Chris Jericho, and Ric Flair facing Booker T, Shawn Michaels, and Kevin Nash as well as the true main event for the show, Rock vs Goldberg. But also, Cena was simply not at the main event level yet.

The match wasn’t great, but featured a brawling style that they’d perfect in 2012 when Lesnar came back to the WWE.