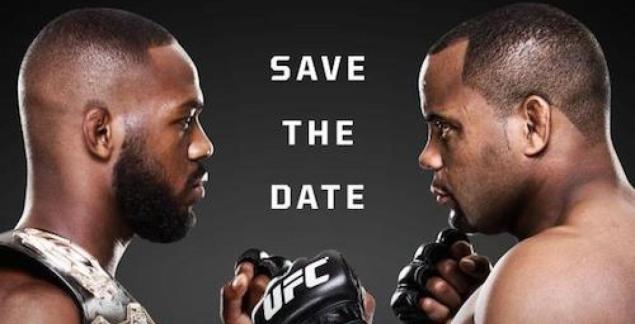 As the photo says, save the date. Except, that date has now changed.

After Alexander Gustafsson pulled out of UFC 178 because of an injury, Daniel Cormier took his place even though he was originally going to fix a partially torn ACL before accepting.

The news came out today that Jon Jones is injured with a torn meniscus and a sprained ankle and the fight has been moved to January 3, 2015. The news was broadcast on FS1’s America’s Pregame show.

Now, January becomes quite the month for the UFC. With Jones and Cormier set for UFC 182, the UFC’s two biggest possible fights are both scheduled for the same month as Anderson Silva and Nick Diaz are scheduled for UFC 183, the night before the Super Bowl. Ronda Rousey has talked about fighting on that January 3rd show as well.

Demetrious Johnson vs Chris Cariaso has been moved from UFC 177 in Sacramento to become the new main event for UFC 178. That’s quite a drop in PPV buys for that show, though, to be fair, there’s nothing that could fill the void for that show.