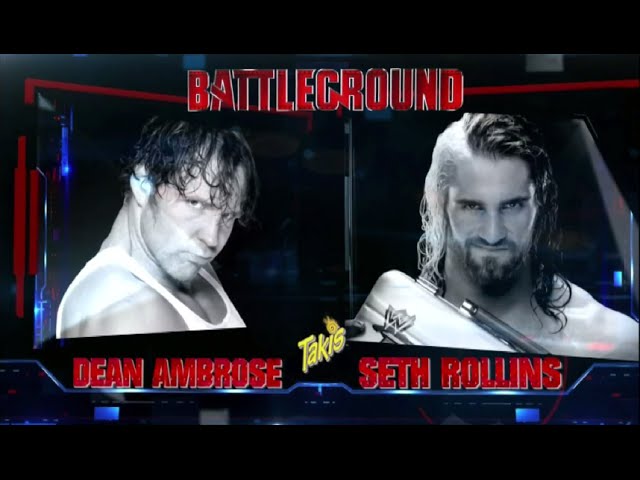 Seth Rollins and Dean Ambrose were scheduled for a match at WWE’s Battleground PPV. That match didn’t happen and in today’s new game, WWE shouldn’t be breaking any promises.

After a hot opener between the Usos and the Wyatts at last night’s Battleground PPV, a great video package played previewing the Seth Rollins and Dean Ambrose match.

The match didn’t follow the hot opener. Instead, Dean Ambrose attacked Seth Rollins who was doing an interview and they had to be separated. Triple H kicked Dean out of the building.

This is a historic night that I will not have ruined….. Ambrose will not be returning. #WWEBattleground

Seth Rollins came out in the center of the ring to be announced the winner of the match. I think most people expected Stone Cold Dean Ambrose to heroically show up to start a match that people were dying to see. Well, he showed up, but only after Rollins was announced as the winner.

They had a helluva pull apart brawl. It started and stopped several times. Jamie Noble and Fit Finlay were involved. And both men couldn’t wait to get a piece of each other.

Some will say that because WWE only charges $10 a month (which basically means their PPVs are worth $10 a month), that you shouldn’t be so bothered and should instead expect things like this. I say it’s exactly the opposite. This is WWE’s new business model. The most important metric is WWE Network subscription growth. And if you make PPVs no more important than a regular old Monday Night Raw, growth will flatten out quickly.

These shows need to be must-see. WWE fans need to feel like if they miss a PPV, they’re missing something special. WWE PPVs can’t feel like a missable UFC Fight Night card.

Rather than do the brawl in lieu of the promised match, they either should’ve have not promoted the match at all, or given the fans a little something with a shorter match. If both guys went out and beat the hell out of each other for ten great minutes and then went into the crowd and did a double count out, it could’ve set up a no holds barred match at SummerSlam. Or maybe a cage match. And doesn’t that still whet the appetite in the same manner?

This was the first WWE Network PPV in which I felt that I didn’t get more than my $10 of value. If Rollins and Ambrose had a match, I may have felt differently. I’m not going to cancel the WWE Network anytime soon. But if they feel that they can pull bait and switches like they did Sunday night because they’re only charging $10, then someone needs to smarten them up to their new business. PPVs are more valuable than ever as a subscriptions draw, not less.