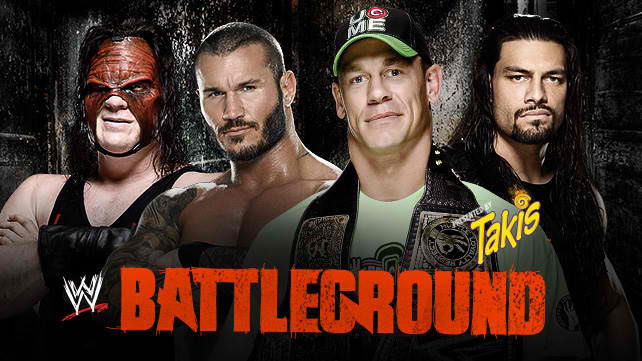 Check out our Battleground live coverage!

The pre-show actually had two matches with Fandango losing to Adam Rose in one minute and Cameron beating Naomi.

The Usos and Wyatts start it off.

1. The Usos Vs The Wyatts

Harper won the first fall with a big boot to Jimmy Uso.

Jey Uso rolled up Harper to win the second fall. So far this match is going by pretty quickly.

The entire match was set up in the third fall. Jey made a hot tag to Jimmy and there were some great near falls. The best one was Luke Harper trying to do a dive underneath the top rope and was met with a super kick for a near fall. Lots of super kicks and big boots and splashes.

Rowan did a double superplex on the guys for a two count. The finish was a double super kick and then double big splash from the top that pinned Harper.

They teased that Dean Ambrose and Seth Rollins were next, but while Seth was doing an interview, Dean jumped him and Triple H kicked Dean out of the building.

This match was weird. It’s like they had no chemistry.

Paige tried to spear her out of the ring and it looked like a hug. She gave her a sunset flip off the top and AJ forgot to let go.

Paige caught AJ and was about to slam her, but AJ turned it into the Black Widow. Paige grabbed her hair and tossed her out of it. She hit the Paige Turner for a two count. Then went for her Scorpion Cross Lock and AJ got out of it. AJ did a form of a shining wizard for a win.

Lana cut a long promo and brought up the Malasian airline that was shot down by the Ukranians.

It was a long, plodding match centered around Swagger trying to use the ankle lock. Every time he’d try for it, Rusev would go for the ropes or get out of the ring.

Long rest holds with Rusev grabbing on Swagger’s trap muscle. Swagger finally got the ankle lock then got it again when they were outside the ring. Swagger was knocked into the flag post and Rusev made it into the ring and Swagger was counted out.

Rusev threw him back in the ring and was limping. He then put on the Accolade.

This is a historic night that I will not have ruined….. Ambrose will not be returning. #WWEBattleground

Seth Rollins came out and was announced the winner. So far, no Dean Ambrose.

Instead of a match, they had a great pull apart brawl that took many agents to break up. Triple H also came out. But it still smells of a bait and switch.

Jericho did a big dive off the top and got all three of them. Harper and Rowan were ringside and got booted.

Jericho sold for much of the match and Wyatt hit a lot of hard hitting offensive moves. He hit a Rock Bottom-like maneuver which was more like a throw than a slam. He did the crab walk to a nice pop.

Jericho hit the Code Breaker sort of out of nowhere for the win. Have to imagine Wyatt wins the next two matches before Jericho leaves again. Jericho celebrated with his dad and son.

The Miz kept rolling outside the ring, but under the rope and played possum. Some fun stuff between Cesaro and Kofi Kingston including Kingston getting tossed out of the ring, but landing on Big E’s shoulders who was just tossed out. Cesaro finally got him out and then was tossed out by Heath Slater.

The final three were Sheamus, Dolph Ziggler, and Miz. They were trying to play it like people didn’t remember Miz was still in the match except we all remembered. Ziggler threw out Sheamus and Miz immediately showed up and tossed Ziggler.

6. Randy Orton Vs Kane Vs Roman Reigns Vs John Cena

What they were setting up was Cena vs Reigns for the entire match. Nothing else really mattered. When they finally did get going, Cena at a Superman punch and then a spear, but Kane broke it up.

Reigns and Cena traded two counts on Kane, but continually broke up the pins.

Kane hit choke slams on Cena and Reigns each. He went to hit the tombstone on Reigns, but Reigns got out of it and hit the spear. Orton came in and hit the RKO on Reigns. Cena hit the FU on Orton and dropped him on Kane. Cena pinned Kane to win the match.