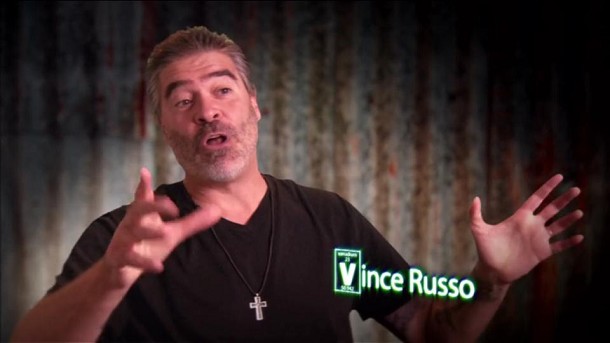 With the recent news that’s outed Vince Russo as working with TNA (that he vehemently denied), it begs the question; stupid or liar?

Adam Carolla has a simple theory. When people say or do outlandish things, he breaks it down to simply; stupid or liar? It’s an interesting theory because being stupid takes on little responsibility, but being a liar puts the responsibility on the person completely.

In wrestling, it’s easy to put all wrestlers in the liar bucket. Wrestlers historically lie to promote. They lie to save face. They lie because they can’t remember and just say what they think sounds best. Like Konnan says, “Don’t ever let a lie get in the way of telling a good story.”

So where does Russo fit in? He’s not a wrestler. He’s a writer. For a short time, he was a very successful writer. For most of his career, he hasn’t been.

When the rumors came out that he was working for TNA as a writer, he flat out denied them. He blamed the “dirt sheets” (which is a weird name since everything is done on the Internet now, including his own website Pyro & Ballyhoo which is no longer just his blog, but is looking more and more like an IGN knockoff every day) for creating this information.

He’s been on podcasts like Stone Cold Steve Austin’s show as well as MLW Radio to talk about the good old days. Russo has always had his verbal tics to where you can tell when he’s probably going to start bullshitting. The first is when he says, “If I can be honest with you.” That usually means he’s going to do exactly the opposite. The second is when he says, “I’m shooting here with you.” Why you’d have to discern your honesty in an interview which should be entirely honest is beyond me. And the last one is when he says, “You’re gonna love this one.” He will then go on to tell a story that probably existed somewhere, but he’s going to embellish on it greatly.

I had a chance to talk with Bryan Alvarez from F4W/Wrestling Observer over 4th of July weekend in Las Vegas. I hadn’t talked to Bryan in a few years, but I wanted to ask him about Russo because he’s someone who isn’t afraid to call Russo out on his lies. He even wrote an article for his newsletter about giving up watching TNA Impact, partially because it had Russo’s imprints on it.

I read an article on why it’s tough for the people writing Impact. It was written by Vince Russo. Yeah. So, as one would expect, it was filled with 9 million bullshit excuses. I liked the one about how the building at Universal Studios is not a good building for wrestling because so many tourists show up. I was unaware that pro-wrestling fans were restricted from attending. That’s like saying the crowd at Full Sail University for NXT sucks because only college kids go. Except it appears plenty of wrestling fans manage to attend at Full Sail, plus the NXT crowds almost never suck. It is ironic, because Russo claimed that the crowd sucked because sometimes Impact had to tape one and a half shows per taping. Last time I checked NXT taped four shows per taping. They seem to be doing all right. Come to think of it, they’re doing great.

Some wrestling fans saw it as petty for Alvarez to stop covering the show since he’s a wrestling journalist and I guess when you’re a wrestling journalist, your job is to watch and cover anything and everything. But my guess is that the fans who wanted him to continue covering it were people who weren’t watching themselves. But they still wanted to read about it.

I talked to Bryan about Russo’s podcast appearances and him taking credit for coming up with the Montreal screw-job finish when that entire topic has been covered ad nauseam and never once have I seen his name in the details except when it came to not knowing what the hell was going on.

Alvarez has reworked his book, “Death Of WCW” which is set to release in October (and yes, there’s a hardcover version this time) and Russo supposedly wants on the radio show Alvarez and Dave Meltzer do together to discuss the topic, though, he admittedly hasn’t read the book. I don’t think he’ll be on the show unless he does.

In the July 21, 2014 edition of the Wrestling Observer Newsletter, Dave Meltzer wrote that Russo outed himself and has been in fact working with TNA all along like everyone expected. Russo accidentally emailed Pro Wrestling Insider writer Mike “Scoops” Johnson. But Russo wouldn’t go down without a fight.

All in quotes is what Meltzer writes and my thoughts are below his.

At first Russo went on Twitter in response saying, “Wow–just amazing to see that anybody will print anything as TRUTH without checking into it. Nice to see the SWERVE still works!!!”

Russo’s swerve was that he meant to send Johnson the email to see if Johnson would report it?

He then wrote, “Since an unreliable website has brought me so much free promotion–feel free to check out my web site.” Then he wrote to Johnson, “Would you thank Dave (Scherer, Johnson’s partner on the web site) for me for all the free promotion. If I knew it was going to be this easy, would have done long time ago!” Johnson wrote that the e-mail was legit, he checked into it and it was not an attempted swerve by Russo. Johnson wrote that he could publish the e-mail, and Russo was the one lying about the story. When Russo claimed it was a swerve on Johnson, he wrote, “Swerve? He’s not that creative. More like trying to spin things. The countdown begins Vince. It’s all on you now.”

That’s a checkmate if I’ve ever seen one. It’s odd that Russo would think that he could bully someone into not making him look like a fool because of his own mistake. And in doing so, make himself look like a total fool. Great swerve.

After being checkmated, Russo came clean and said the reason he didn’t say anything about his role with TNA is simply because they didn’t want him to. Personally, I’d love to work with a company who wanted to publicly hide the fact that I was working for them.

And then he had the line of all lines. The Iron Sheik would say that this was the greatest line he’s heard all time, all his life.

“My integrity means everything to me, so I just hope you can understand and forgive.”

So what do you think? Stupid or liar?