On Sports Nation, Michelle Beadle asked The Rock about his return to wrestling.

The Rock did what ESPN calls the car wash where talent gets interviewed for multiple ESPN TV and radio shows as they promote their vehicle, which in Rock’s case is his new movie Hercules. 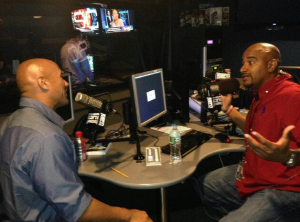 (Of course he had to talk to The Coach who is now an ESPN anchor. The Coach tweeted out the photo to the right on Tuesday.)

He mentioned what he’s mentioned before and it’s that he wants a marquee match-up that makes sense. In the past he’s stated that he wants to break the WrestleMania buys record, or do the same type of business his WrestleMania 28 match with John Cena did. However, with WWE’s business model being solely about the WWE Network, I’m not sure how he and Vince McMahon will be able to measure the type of impact of future match-ups. He did mention Roman Reigns which leads me to believe he has his eye on him and would love to strike while the iron is hot with the Reigns character.

What he didn’t talk about is how his movie career interferes with that considering he is a much bigger movie star today than he was during his most recent wrestling run which started before WrestleMania 27, over three years ago. However, the guy has an insane work ethic and I fully believe if he finds something wrestling-wise that he can sink his teeth into, he’ll do it as long as the timing works out.

You can watch his conversation with Beadle below.