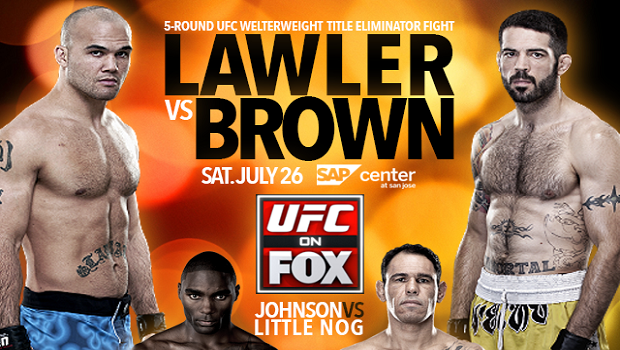 We are live at the former HP Pavilion (now the SAP Center) in San Jose, also the former home of Strikeforce. Check out our UFC on Fox live coverage.

It wasn’t the most technically proficient first round, but Lahat did enough to comfortably take it. He had several take downs and landed several good punches. Siler can land left hooks if he wants as Lahat drops is left hand a lot.

This was a super close round, but not back and forth at all. Siler owned the first four minutes with striking. Lahat was tired. Lahat finally got him to the ground and nearly finished him. He had a rear naked in which he chicken-winged Siler’s arm behind his back and transitioned to a triangle. Still give it to Siler slightly but Lahay closed strong.

Round three was clearly Siler’s round. Lahat didn’t have much. The winner will be based on the second round. I’ve seen a lot of folks give Lahat the round online.

Lahat says he’s going home to fight for his country who is in war.

The first several minutes of this were boring. Lima pushed
Jedrzejczyk up against the cage and they did nothing. Near the end of the round Jedrzejczyk started to let her right hand go. Maybe one punch landed, but Lima was smiling.

Much stronger round for Jedrzejczyk. Lima hasn’t really got started yet and Jedrzejczyk is throwing some strong right hands. She also landed a nice push kick.

Third round was a snoozer. Jedrzejczyk should get the decision.

Burns landed an uppercut that may have broken Stahl’s nose. Decent round as Stahl landed shots too, but I’ll go with Burns.

Burns’ style is very pleasing. While both guys are landing, Burns is dictating with his energy. I think both rounds have been close, I have Burns leading.

Fun fight and both guys deserve to be in the UFC. Burns should win the decision.

Trator was the aggressor and was winging some wicked punches from behind his shoulder. Arreola got a takedown late.

Arreola got one back. He’s starting to land kicks which is slowing down Trator who wants to come forward.

I think Trator wins the fight. The third round was competitive, but he pushed late.

Ortega quickly got the choke. De La Torre fought it, but tapped while standing up with Ortega on his back.

Winner: Brian Ortega by way of 1st round submission

Great first round. Perpetuo came out guns a blazing. He stayed active and constantly pressed Means. Means was back pedaling. There was an eye poke by Means and then Perpetuo complained of a head butt.

Means is doing much better in the second. After Perpetuo’s complaining, the crowd is completely behind Means now. Means may have taken the second after losing the first.

The third round was very close. For some reason, Perpetuo decided to put his hands down and play up to the crowd and got hit in the face several times. Could lose the round and fight because of it.

Cummins took him down far too easily early. He shot from far away and still got it. Cummins had him in a front face lock and threw him down like a strong man. Easy round here for Cummins.

The second round was absolute ownage by Cummins. Kingsbury spent the entire round on his back and he was saved by the bell of being finished.

More ownage by Cummins in the third. He couldn’t finish Kingsbury but he did everything but. That second round could’ve been 10-8. The fight ended with Cummins holding into a front face lock again. No throw this time though.

Cruikshank landed the best punch of the show so far; an overhand right that looked to put Masvidal to sleep. But Masvidal came back in the round. Cruikshank was moving a lot, but Masvidal started to catch him with punches.

The round was all Masvidal. He got an early takedown and Cruikshank couldn’t get up. He fought through a choke, but I couldn’t tell if it was close.

Third round was a dud. Masvidal controlled him on the ground for just about the entire round.

The round was mostly front leg kicks and a big eye poke by Green. I’d give it to Green on leading the exchanges and being more busy with the kicks, but not by a wide margin.

Green did more talking than fighting in that round. Thomson would land something and Green would try to show how it didn’t really land. And all it did was five more visibility to how it did. Dumb strategy. Thomson got a takedown late as well. I have it at one apiece.

Nobody wanted to take a chance in the third. Both guys did more feinting than anything. I’d slightly give it to Green based on him being aggressive. But he was barely more aggressive. I could’ve scored this last round a 10-10.

Guida had absolutely nothing for Bermudez. Bermudez was the quicker of the two, had the much better boxing and had no problem with his takedown attempt. Bermudez caught him in the corner with some huge knees and was rag dolling him.

The second round wasn’t any better for Guida. Bermudez choked him out to finish.

Winner: Dennis Bermudez by way of 2nd round submission

Well, that didn’t take long. Rumble threw a vicious combination of uppercuts and crosses that put Lil’ Nog out bad.

Winner: Anthony Johnson by way of 1st round TKO

Brown made it awkward for Lawler and slowed his offense. Lots of high kicks, low kicks, straight rights, back fists, and takedown attempts. I have it split.

Lawler took the third as he stated to go to the body with kicks. He hit Brown low and the crowd booed heavily. Brown came back late with body kicks of his own.

Lawler must’ve sensed Brown was tiring. He caught Brown’s leg and Brown went down. Lawler followed him to the ground and was actually winning the position and Brown couldn’t do anything with him. I think Brown needs to finish to win.

Such a close final round. Brown must have hurt his hand as he was throwing elbows almost exclusively. Brown came on with about half the round over and got tired. Lawler looked to be close to putting him away, but Brown fought back. Lawler landed a head kick on Brown when he was on his butt. I have it 4-1 for Robbie Lawler.