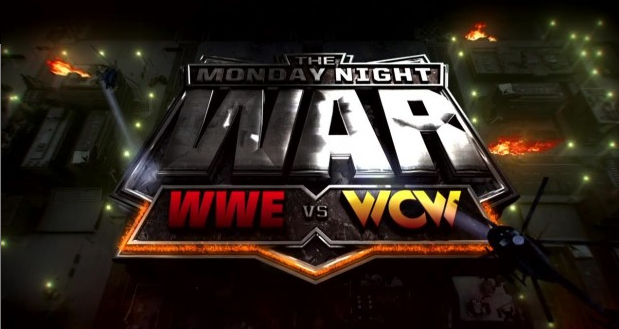 They say he who wins the war rewrites history. That’s a real statement, even in the choreographed world of professional wrestling.

About ten years ago, WWE released a DVD called “The Monday Night War” which chronicled the wrestling TV ratings war between WWF and WCW in the late 90s. Besides the fact that the documentary was short changed (how can you tell that story on ONE disc), what really bugged me was the revisionist history of the piece. There are moments where you literally have to peel Gerald Brisco’s lips from Vince McMahon’s ass with the jaws of life.

With the advent of the WWE Network, one of the promised shows was a program dedicated to the Monday Night War. I thought they might just air the old DVD with extras, but it turns out that the Monday Night War: WWE vs. WCW was going to be a 20-part in-depth documentary series, not unlike ESPN’s 30 for 30 series. This is exactly the kind of programming that I want on the WWE Network. My thought was, “Okay, this could be cool, but I hope they keep the lying to a minimum,” because I’m aware they will never ever be 100% honest. But still, I was hoping for something a little less biased. When I was told that Keith David does the narration, I was excited as I’m a Keith David mark.

WWE gave us sneak preview last week to entice new people to join the Network during their free preview week. I came into it with my bull shit meter cranked at full blast and even though I didn’t have my copies of the Wrestling Observer Newsletter, the Pro Wrestling Torch, or Death of WCW beside me, I trusted my own vast knowledge of wrestling. And sure as shit, from the onset, I could already see the little annoying nuances that make this a WWE production. They refer to Ted Turner as a “Southern Billionaire” who went to war with WWF. That’s nice, except for the fact that Ted Turner is from Ohio. Did you know that Vincent Kennedy McMahon was born in North Carolina? Such an extreme case of irony indeed, from a company whose top officials have had bias against the south since the 80s. 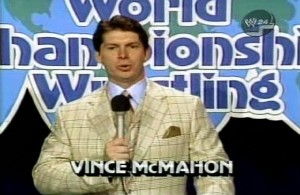 From the start, the setting is the 1980s, where the WWF became a global phenomenon. They BRIEFLY glance over Black Saturday, which was the day the WWF programming took over Georgia Championship Wrestling’s time slot on Turner’s TBS Superstation. Vince McMahon recalls that for some strange reason unbeknownst to him, Ted Turner wanted out of the deal and Vince didn’t understand why. Well Vince, maybe it has to do with the fact that your programming tanked on the Superstation because you were providing a “New York” wrestling product with slow and plodding matches taped weeks and weeks prior that already aired on USA previously (which is about a second rate as anything TNA has ever done), and it couldn’t compete with the grittier, more realistic pro wrestling that Turner viewers were accustomed to. No mention of the Brisco’s involvement in that conspiracy either.

One of the most surprising moments was when they talk about the WWF’s business downfall in the early 90s, showing clips of the Gobbledy Gooker and other bad gimmicks from that time. They then segue into the transition between Prime Time Wrestling and Monday Night Raw (uncooked, uncut, and uncensored, by the way), which I love because WWE has somehow brainwashed modern fans that Raw was the first wrestling show on Monday nights even though Prime Time was there years before.

Next, they talk about the understandable jitters of doing live shows every week, but fib to us about how Raw was a huge hit when it started when really, the WWF wasn’t any more popular because of the show. In fact, they were in the middle of a number of scandals during this time and if anything, they were on the downtrend.

The next segment focused entirely on WCW and the changes that Eric Bischoff made within the company, including changes to the presentation and production, bringing in former WWF announcers and letting go anything that made it sound regional or southern. In a little bit of a shock, Dr. Harvey Schiller and Tony Schiavone (who hasn’t shown up on WWE TV in a long time) appear here to give their two cents. There is also a number of canned interviews with Ted Turner from the 90s. This all leads to the big shot that was fired; Bischoff’s recruitment of Hulk Hogan, including a staged parade that had about eighty people there (but they said there were thousands). Vince admits, probably for the first time publicly, that it bothered him greatly. This segues into a pretty fun segment with Randy Savage’s departure, as told by his brother Lanny “The Genius” Poffo. I marked out! They actually show Vince’s emotional goodbye and thanks to Randy Savage which aired on Raw and has never been mentioned by WWE until now. WWF would counter WCW’s moves by pushing the “New WWF Generation” with younger and more athletic talent. 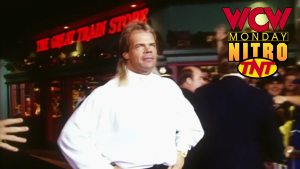 This all leads to Bischoff telling the story of stepping into Turner’s office and Ted asking him what they needed to do to compete. He’s told this story a few times, but the one thing he says that is factually wrong (and this could be his memory and not him lying) is when he quotes Ted in saying “Give Eric two hours on Monday Night on TNT.” Nitro was only one hour when it launched and wouldn’t go to two hours until about nine months later. But that’s not worth throwing a fit over. Of course, you can’t talk about the first Nitro without talking about Lex Luger. This is the reason people have 90-day no compete clauses now folks. Blame Lex.

This would ALSO lead to the classic “Wait a minute… he doesn’t work here,” cliche that TNA would beat into the ground every time they signed a WWE guy.

I very much liked that they spent a good amount of time on the first Nitro because it deserves it for setting the tone for years to come. They then go into the second episode of Nitro, which would be the first time Nitro and Raw went head to head and featured Bischoff giving away Raw’s taped results. This was talked about on the 2004 Monday Night War DVD and is expounded upon here. And yes, MORE VINCE HYPOCRISY as he cries about Bischoff trying to hurt him. Vince is SO against hurting the competition, even though he built his fortune on raiding talent and undercutting other companies by overpaying TV networks for time slots. Oh, and what about when he threatened PPV carriers in 1987 by telling them if they aired Starrcade and not Survivor Series, he wouldn’t allow them to air WrestleMania IV? What an ethical businessman Vince is. Let’s paint WCW as the “dirty” enemy, even though almost EVERY SINGLE THING BISCHOFF DID TO VINCE IS SOMETHING VINCE ALREADY DID BEFORE! Where’s the Verne Gagne, Ole Anderson, Don Owens, and Sam Mushnick’s interviews? How many companies did Vince bury in the 80s?

Oh also, I must mention Madusa gets her own segment too. Gosh, how could Eric Bischoff be so dirty as to have her bring the competition’s belt and make a joke out of it on his TV? I mean its not like Vince did that in 1991 or anything right!? Right? (Just be fair to Flair.) But you wanna talk about unethical? What about the Billionaire Ted skits? They are mentioned here with WWF mocking the aging WCW talent (even though Bob Backlund and King Kong Bundy were pushed acts all throughout ’94 and ’95). What started as a playful parody soon became even more cutthroat than anything WCW had done, with WWF attacking Ted Turner’s business practices, mentioning steroids in WCW, the FDA, and even an attack on Ted’s wife Jane. Kinda low bro, but Ted is alpha so he wasn’t bothered. This was rightfully criticized on here.

The more things change, the more they stay the same. You would think since its been, oh, I don’t know twelve years since the war was won by WWE, one would think that maybe they’d get over it. But no, they still lie. Even though this is only the first episode, it’s essentially the same story from the 2004 DVD release, just longer and with more interviews and slightly more detail.

The series is set to air full time in August. For many fans, this will be a fun retrospective watching fun times that they hadn’t seen. For me, I own every Nitro and every Raw from the era, so I can revisit it whenever I want without the lies. I’m not going to stop others from having a good time with this, but I will advise you to be aware of the revisionist history that the product is going to push upon you. To quote a one of my favorite movies ever, 2000’s Memento, “Don’t believe his lies.”

Check me out over at SuperfriendsUniverse.com AND check out my pro wrestling themed podcast – The Kayfabulous Lucha Bros Wrestling Show!