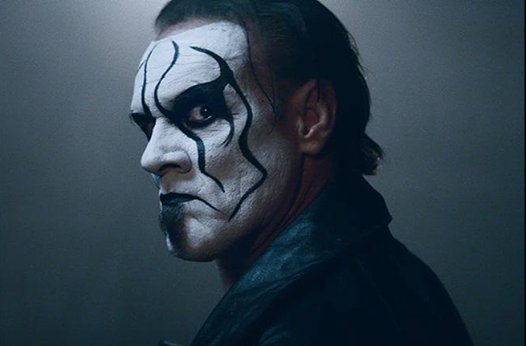 It’s the go home show for Battleground, yet the biggest things on the show were the return of two greats.

I want to point out that Sting wasn’t physically there in the arena on Raw, but the character Sting returned to WWE TV via the new trailer to the WWE 2K15 game. Sting is an extra character that you can receive by purchasing the game before it hits retailers.

You can even buy the Sting shirt on WWE Shopzone.

Ric Flair was there to put over John Cena, wooing over Rene Young who seems to have an innate ability to take everything in stride. He set up the main event by saying that he thought Cena would win the Battleground Fatal Four Way main event.

There’s a weird dynamic in that Dean Ambrose might be the most over babyface on the show right now and rather than embrace it, it looks like they don’t want him to outshine their chosen one, Roman Reigns.

The show opened with John Cena out talking about his Fatal Four Way main event. Roman Reigns came down to the ring so that he and Cena could talk about the main event, which was scheduled to be Cena, Reigns, and Ambrose vs Randy Orton, Kane, and Seth Rollins.

Ambrose showed up on the big screen to tell them they needed a plan to win the match tonight. Then he was jumped by the Authority in a beating that went on forever. Where were Cena and Reigns? Did they watch on the tron? Did they try running to the back? Did they laugh while it was happening? We’ll never know because all they showed was the beating which went on forever.

To show that no one can get along, Randy Orton, Kane, and Seth all hate each other too. You know who doesn’t? Stephanie and Triple H who made out on camera. I thought Triple H’s nose was going to eat Steph’s face.

Triple H continued to reference a Plan B in case Plan A didn’t work (which is Orton winning) and Paul Heyman offered him a Plan C, which I’m guessing is Brock Lesnar. So what is Plan B?

During the main event, which was changed to a handicap match because of Ambrose (and Cena and Reigns didn’t seem to care about their little buddy at all), the Authority was disqualified for excessive double teaming. At the end, Reigns accidentally speared Cena. Orton was standing tall until Reigns speared him to end the show.

Ambrose was no where to be found.

– Dolph Ziggler beat Fandango thanks to Layla and Summer Rae dancing. The women were into him which he seemed very surprised about. Really show stealer?

– Damian Sandow and Adam Rose did a terrible Sonic product-placement segment. One of these guys deserves better. The other doesn’t.

– How was the tag title match set up? Well, the Usos came out and Harper and Rowan blindsided them. Oh, and it’s now a two out of three falls match.

– Jack Swagger and Rusev had a debate. Well, it was really Lana and Dirty Dutch, I mean Zeb Colter. It was a fun segment because Lana and Zeb talk great and Rusev’s facials were excellent. Rusev jumped Swagger and was putting the beat down on him when he caught the side kick and set up the ankle lock. If I felt this would be competitive, it’d probably be the second most interesting match on the card for me.

– Alicia Foxx and Cameron beat Nikki Bella in a handicap match. Yep, the first of two.

– Cesaro was sans Paul Heyman and lost to Big E. That’s what, three losses in a row on Raw?

– Chris Jericho cut a white meat babyface promo and then was beaten up by Bray. I am still bothered that they had Randy Orton beat him on Smackdown.

– AJ beat Eva Marie with Paige on commentary. Paige and AJ have this weird charisma together. Paige called them frenemies. They’ll face each other at Battleground.

The go-home shows are rarely the best Raws of the month these days. This show was just there. Now if Ric Flair and Sting were wrestling at Battleground…