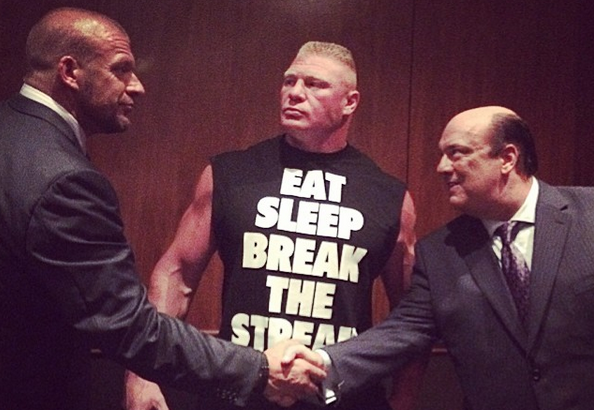 Raw was better in just about every way than Battleground was Sunday night.

The show-long storyline was based on Triple H’s search for John Cena’s opponent at SummerSlam. Cena wasn’t on the show himself. Randy Orton, Kane, and Roman Reigns all tried to make their case for Cena’s opponent. Reigns went on to say that no one wanted to see Cena face Kane or Orton and he was absolutely correct about that. He then sucker Superman punched Kane while Orton slithered out of the ring. Triple H then set up a handicap match between the three of them and Reigns beat them both.

Triple H told Seth Rollins that since he has the briefcase and the title shot at any point, he’s not the right person for the main event. That one hurt. Cesaro showed up and told Triple H that he’s not a Heyman guy anymore and wants to be with the Authority. Triple H set up a match between Cesaro and Dean Ambrose which turned out to be the main event.

Triple H had something else on his mind, which we’ll tackle with the next headline. At the end of the show, he introduced Cena’s opponent and Randy Orton’s music played. If it could be any more quiet in the arena, I would like to see it. Reigns jumped him and took him out and Triple H was alone again.

A smiling Paul Heyman came out along with Brock Lesnar as Plan C. Heyman cut quite the promo on Lesnar breaking the streak and how Cena’s 15 title reigns in 10 years is something worth conquering. 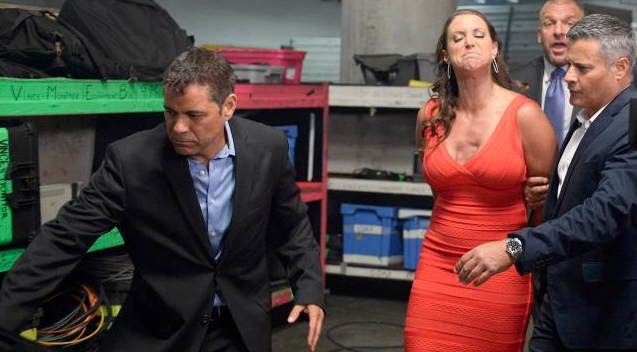 Stephanie had the performance of the evening.

Stephanie placed Nikki in a handicap match (yes, two handicap matches on one show, and one after another) against four divas. Eva Marie, Alicia Fox, Cameron, and Rosa were in the ring ready to give Nikki a beating.

Nikki came to the ring and hugged her sister Brie who was ringside. Stephanie came out and chastised Brie and called her a quitter. Brie called her a bitch twice. Stephanie wanted to kick her out of the arena, but Brie had a ticket. And then Stephanie slapped her silly and at that point, she was kicked out of the arena. After Nikki was whipped, Steph told Nikki she would quit too.

Later in the show after Flo Rida performed, Stephanie was in the center of the ring to ask the crowd to give him another applause.

As she left the ring, authorities showed up and arrested Stephanie who was surprised and then very angry. They handcuffed her while she yelled at them. All of a sudden, Brie showed up and they were screaming at each other. For some reason, Steph’s breasts separate like Tori Spelling’s when her hands are behind her back.

They placed her in the cop car and Triple H told the authorities that they were making bad career decisions. At one point he even mentioned Jerry McDevitt.

– In a segment that was played via the WWE App, Chris Jericho was beat up by Bray and the Wyatts. This led to the Highlight Reel hosted by Bray Wyatt. Jericho was busted up in the back.

– AJ Lee and Paige beat Emma (no idea if she got cat calls) and Natalya and after the match, Paige destroyed AJ. She’s full-on heel now.

– Zack Ryder beat Fandango. It really does suck to be Fandango right now.

– Rybaxel beat Big E and Kofi Kingston. After the match, Xavier Woods came out and it looks like he’s going to manage the two of them as a more serious two-some. A lot of people are calling them the New Nation, but I doubt they’ll do the Black Panther stuff in 2014.

– Rusev beat the Great Khali. Most newsworthy is that Lana didn’t really get a chance to say anything, which at this point is probably for the better.

– Cesaro beat Ambrose by DQ after he hit him with a chair. Cesaro dominated most of the match and it wasn’t as good as you’d expect it to be.