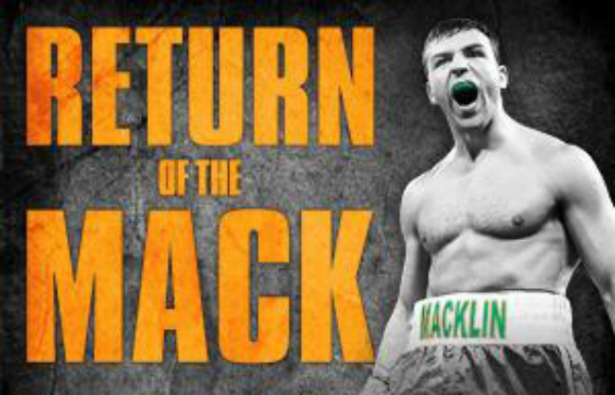 Matchroom Sport kicked off the build to their August 30th season opener in Dublin yesterday with a lively press conference at Croke Park stadium. Joining Matthew Macklin and promoter Eddie Hearn on the panel were Olympic super-heavyweight gold medalist Anthony Joshua, domestic rivals Gary O’Sullivan and Anthony Fitzgerald, and local prospect Luke Keeler. You can check out the full video in the player above.

The big news coming from the conference is that the Macklin/Heiland bill is only the first step in Matchroom’s expansion into the Irish market with Macklin as the headline attraction. Two dates in November (the 1st and 15th) have already been earmarked for a potential Dublin return at the much larger O2 Arena, with long time rivals and fellow title contenders Martin Murray and Andy Lee being targeted as possible opponents for the Tipperary middleweight. Then, the long term goal will be to move forward with a Macklin world title fight at the 80,000+ capacity Croke Park Stadium, where Matchroom will be looking to replicate the size and scale of the Froch/Groves Wembley show in Ireland.

Hearn noted that it was Macklin’s desire to return home that set the plan in motion. The August 30th bout was initially intended to be more of a keep busy fight that would allow them to test out the market, but when the option to take on Heiland in a WBC ranking fight came up, Macklin jumped at it, as a win would position him strongly to pursue a WBC final eliminator against Martin Murray.

Hearn emphasized that while their aim is on winning a world title, they weren’t tied to the WBC route, and were instead focusing on making the major fights. He feels a show in the O2 would require big marquee main event, naming Lee and Murray as the ideal opponents for it. He also suggested that being able to draw a full house at the O2 could be enough of a hook to entice either WBO champion Peter Quillin or IBF champion Sam Solimon over for a title defense, while a Croke Park sell out would make a Dublin trip a no brainer for either belt holder.

Macklin spoke of being proud to be the one to bring boxing back to Dublin, and said he was humbled by the quick sell out and public response to the August show. He mentioned that he won his first ever professional title at The Stadium on his 23rd birthday, calling it the home of Irish Boxing, and saying it was a place that always has a special atmosphere on fight night. He said his dream would be to defend a world title in Croke Park.

Hearn talked about needing to find the right headliner before they could run shows in Dublin. He felt they needed somebody who could pull in TV viewing figures, because without producing ratings, it’s too expensive to run live fights in the market. He believes Macklin is somebody who can move the needle for Sky, so to is Joshua, which is why he was put in the support slot. Hearn made the argument that over the long term, their ability to draw TV numbers for these Dublin cards will dictate how they progress in Ireland. He thinks this bill has the right mix to attract the casual sports fan.

The domestic grudge match between “Spike” O’Sullivan and Anthony Fitzgerald was the other major talking point from the presser with the Dublin and Cork rivals almost stealing the spotlight. The two boxers traded barbs back and forth over past fight negotiations and sparring stories, with members of their respective teams getting involved, in a heated but otherwise good natured war of words.

Heavyweight Anthony Joshua may have been the star of the show though. The Olympic champion was massively popular with the Dublin crowd and the big man went to every length to meet with each person in attendance and pose for photos and sign autographs before and after the conference. The guy has all the qualities of a genuine breakout superstar in the sport. On fight night, he may be just as popular in the arena as any of the Irish boxers.

A number of additions were also announced for the August 30th bill with former Irish amateur stars and recent pro converts Tommy McCarthy and Declan Geraghty joining the line up, alongside Matchroom boxers John Ryder and Tommy Coyle. No opponents have been named for any of the four men as of yet.