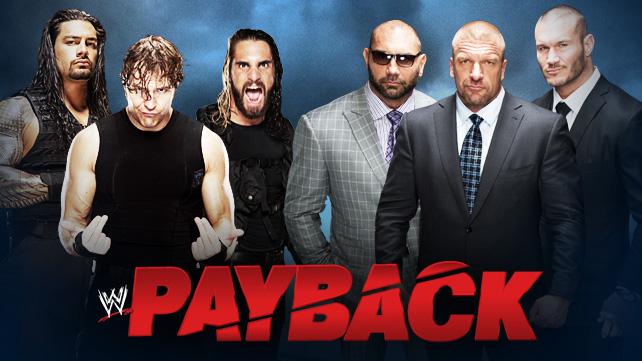 It looks like we’ll get two extra matches based on the preview show. Ryback attacked Goldust backstage so we may get the Rhodes Bros vs Rybaxel. Also, Booker T mentioned he got breaking news and Kofi Kingston, who was on the pre-show with him, would have to face Bo Dallas.

Paul Heyman responded to CM Punk chants by saying he was at the United Center watching the Blackhawks and then said the Blackhawks would lose to the Kings.

These guys are knocking the hell out of each other. Sheamus hit the forearms early. Cesaro hit the uppercut as Sheamus tried to dive over the top rope and back into the ring. Cesaro did his superplex from the outside.

Sheamus turned an uppercut attempt into a backbreaker. He then hit three knee drops from the second rope for a two count. Cesaro used a back elbow to break up the momentum and then hit an uppercut from the second rope. Sheamus tried to show off a bit of athleticism by pulling himself onto the top rope while sitting in the corner. It wasn’t as slick since he wasn’t sitting before he did it. Cesaro then hit an uppercut while Sheamus tried to jump at him from the top.

Cesaro hit the German Suplex for a two count and then went for the Neutralizer which Sheamus turned into the White Noise for a two count. He locked Cesaro into a cloverleaf, but Cesaro grabbed the bottom rope.

Yes, we got a Giant Swing.

Heyman called for the Neutralizer again, but a supposedly dizzy Sheamus quickly inside cradled him for the win. Maybe Sheamus took some Dramamine before the match.

2. The Rhodes Brothers Vs Rybaxel

Before the show, Cody said their struggles were his fault which is also an angle alert.

Lots of heat on Goldust early on. Hot tag to Cody who nearly killed everyone by almost losing his balance on his moonsault. Ryback and Curtis Axel almost banged heads with Cody who barely got over in time. He may have hit his head. Cody set up for the Disaster Kick by stomping on the mat. Ryback caught him. Then he hit him with the meat hook clothesline for a close two count. Goldust broke it up. Cody hit the Cross Rhodes, but it was also broken up. He set up for the Disaster Kick instead and in what looked like a near replica, was caught again and Ryback hit the Shell Shocked for the win.

After the match, Cody told Goldust that he needed a better tag team partner than him and then he walked to the back.

This is the match that WWE tried to promise us we’d see when Mark Henry faced Ryback at WrestleMania. This is pure carnage. Big E speared Rusev off the apron and to the floor. Rusev damn near took a Nestea Plunge. He hit his own version of the Super Kick and then put on the Camel Clutch for the win. That was brutal, but fun.

For some reason, Kane came out and attacked Kofi. Hit the chokeslam and tombstone and left him laying. Kofi was out. Bo ran out of the ring when Kane was coming down. He came back into the ring and told Kofi that he would be okay and back and better than ever.

Lots of RVD’s usual stuff early on. Barrett set up the Bull Hammer, but RVD ducked and scissored his legs in a pin attempt. Outside the ring, Barrett hurt his arm on the post trying to clothesline RVD. RVD hit a DDT for two. Tried the split leg moonsault and Barrett got his knees up. Barrett then hit the Bull Hammer for the pin. He sold his arm from hitting the post.

It was time for Daniel Bryan to give up his title or have his wife fired. Stephanie McMahon came out first. She told the two that they need to make the right decision for their future bearded children. Bryan told Stephanie that she should think about making the right decision. Brie called her a bitch. Right before Bryan was about to give up the belt, Brie said she can’t be controlled by Stephanie and that rather than be fired, she quit. And then she slapped Stephanie. Stephanie ran to the back.

This is last man standing rules. The Usos came out to even the sides at ringside.

I don’t like all the breaks that happen during this kind of match, especially right in the middle of the ring. Bray hit a Sister Abigail and Cena got up. He then hit the FU and both are down. Cena was up and Bray crabbed up.

This match is pretty good. Harper and Rowan and the Usos got involved. Harper dove through the ropes to wipe Rowan and one of the Usos out. The other Uso came off the top for some sort of flippy do-sault.

Chairs and ring steps are now involved. Bray put Cena through a table. Bray went outside. Cena picked up the ring steps right into Bray’s face. That looked brutal. Hopefully they didn’t hit him in the mouth.

Cena had Bray outside with the AA. Rowan and Harper came back both to beat up Cena and pick Bray up who was almost out. And now the Usos are back. One Uso speared Rowan through a table that was on its side. Harper super plexed the other Uso outside of the ring and through two tables. Bray splashed Cena through the dasher boards.

They went outside and Cena gave Bray the AA through what looked like sound equipment. He then dropped a large piece of equipment on top and Bray was counted out.

That was the best match of their series. They brought out all the plunder and then some.

Alicia was on the offensive nearly the entire match. Her offense was a bit awkward including carrying Paige like one would in a side slam and just dropping her outside the ring. Paige fired up with three clotheslines, pulled Fox off the top rope and onto the back of her head and then put on the Scorpion Cross Lock for the finish.

Alicia faked a cry early on and was acting wacky like she’s been doing. At the end of the match, she called for silence amidst a slight chant of “You tapped out.” She then ran to the back crying.

We can say that it was nowhere near the qualify of match that Charlotte and Natalya had on NXT Takeover.

8. Evolution Vs The Shield

This is a no holds barred elimination match. Big Dave Batista came out in blue tights so he could match his royal blue Jordan 28s.

So many great spots even before the first fall. Seth jumped off the bottom of the big screen. Orton gave the draping DDT using a table on the outside to Ambrose. Rollins with a dive over the top rope where he nearly rotated over too far and hit his face on the top of the dasher boards.

Evolution tried to isolate Reigns by taking out the other two guys. They had Reigns three on one and took off his vest and shirt caned him with the bamboo stick. Rollins got the first fall after Batista was set to beat him with the powerbomb, but Reigns speared Batista and Rollins pinned him. Then Rollins was RKO’d by Orton, but the pin was broken up. Then Ambrose pinned Orton. It was 3-on-Triple H and he brought in the sledge hammer. Rollins hit the knee onto Triple H and then Reigns hit the spear. The Shield sweeps Evolution.