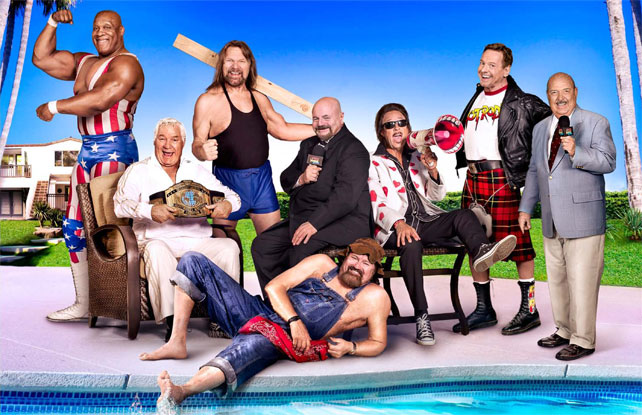 Piper came back and Hacksaw was so happy. The Fink called him their leader.

Ashley came into the house and said there would be a roast. No one wanted to be the subject of the roast. Ashley said that since Piper left the house to sign autographs, he’d be the subject. The guys would get a couple of days to prepare material and Piper would then get a rebuttal. I have a feeling Tony Atlas is getting his feelings hurt.

Comedian Guy Torry is the roast master. At least they got someone I’ve heard of. Dan Ahdoot and Ben Gleib are joke coaches. Mean Gene had some good ones. Pat Patterson worked well with his coach. But Jimmy Hart’s jokes were all super-wrestling insider. Hillbilly Jim was best prepared. And Tony Atlas doesn’t want anything to do with it. He just wanted to laugh. Fink had the nicest ones, but the corniest ones.

Piper worked with Torry on his rebuttals. He’s about to hurt some feelings, even though he doesn’t want to.

A special guest made it to the roast. I can’t believe it was the Iron Sheik. Sheiky baby is here!

Mean Gene had some really brutal ones. He said that Tony Atlas’ parents were so poor that if Tony wasn’t a boy, he wouldn’t have had anything to play with. Patterson said if he had a face like Roddy’s he’d get circumcised.

Sheiky baby did all his normal schtick. Jimmy Hart kept screwing up the timing and delivery of the jokes. Hacksaw said that Pat Patterson is so old that he had his first match with Moses. The mighty Fink struck out. Atlas was awesome. He had a great delivery and killed it.

Piper said that Jim Duggan is such a slut that when Duggan goes into strip clubs, the strippers point at him and go, “Hoooooooo!”

Piper told the guys that there were so many openings and no one took a cheap shot at him and he loves them so much for it. Patterson says they’re getting closer as the time goes on. But he says that he still feels like he’s in character on the show rather than himself.

Mean Gene asks who is walking on egg shells. Some say yes and some say no, but Fink is wishy washy and Piper tells him he needs to be a man and pick or choose. He reminds Fink of the time they went in the limo and Fink took the king’s seat. Patterson reminded everyone how hard Fink worked behind the scenes. They all made up.

Pat made a speech about being themselves and how they only have so many more years left.