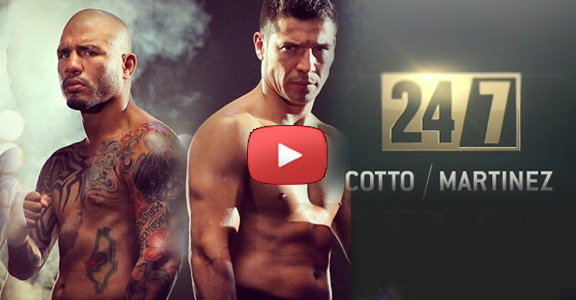 The final episode of HBO’s 24/7 Cotto Vs Martinez short two-part series is up.

I loved this episode. Freddie Roach carried it by saying that Sergio Martinez was a very good athlete, but not a good boxer. He made fun of the way Martinez holds his hands and said that Cotto was going to drop him in four. Four?

Pablo Sarmiento couldn’t believe what Roach was saying and reminded everyone that Roach had a shot against Martinez with Julio Cesar Chavez Jr. and lost.

Cotto’s side was also clearly bothered by the Martinez side saying that Cotto was too old to be taught new things. While Martinez and Cotto themselves never really showed signs of this being any kind of grudge, sans the early Face-Off video that was more about whose name was bigger. Thankfully, their trainers did.

The rest of the episode seemed to be about whether Martinez was healthy or not. He’s going to wear knee sleeves. I wonder if there’s a prop bet about this fight being stopped early because Martinez has knee issues? They couldn’t have been talking about it so much for no reason.

The sell for this fight is simply two really talented fighters who are now bigger names than ever in the sport even with being on the wrong sides of their primes. It still feels big. But it also feels late.