It’s fight night. Follow along our Henderson Vs Khabilov coverage.

This is yet another UFC Fight Night card and this one is maybe the least marketed so far. Benson Henderson has headlined tons of cards, receiving a lot of visibility by fighting on the Fox shows. But unless you were following closely, you may not have even known there was a card this weekend.

We’re going to blog the show live until the Miguel Cotto Vs Sergio Martinez fight starts and then we’ll switch over there and come back here after the fight is over.

Perez got an early takedown and Carway went for the guillotine. Perez went for a kick and Caraway caught it and forced him down. The way Perez landed, it looked like it could’ve been bad news for his left hamstring. Perez is pretty savvy on the ground. Caraway had a rear naked set up, but Perez fought it and ended up on top and back on the feet. Perez did a great job on the feet. Looks too quick for Caraway and is easily out-striking him.

Perez got too cute and sloppy. He took Caraway down again, but Caraway swept him, worked the choke again and tapped him out.

Winner: Bryan Caraway by way of 2nd round submission 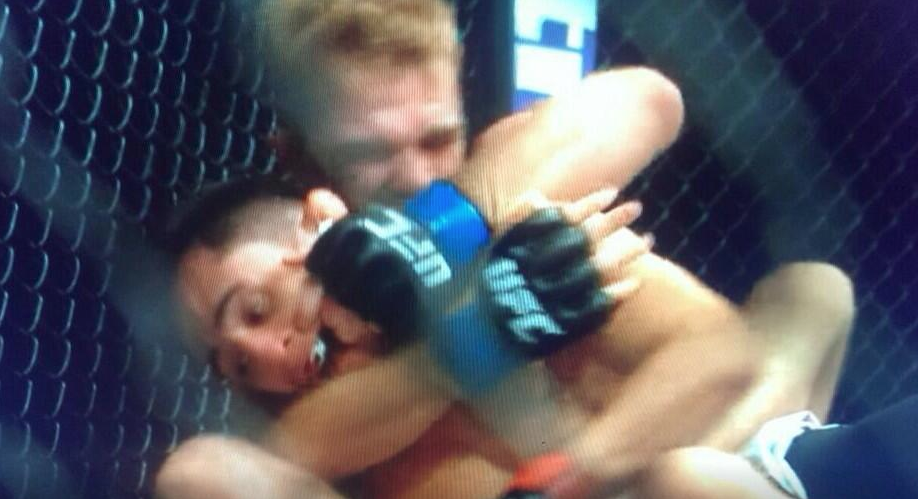 Hallmann poked Edwards’ eye early on and it looked bad, but Edwards didn’t take that much time getting straight. Edwards did a great job moving around and landing, but Hallmann got a late takedown.

Hallmann poked Edwards again, but Edwards got him back with an eye poke of his own. These guys need to stop pawing with open hands. Hallmann continued to put pressure on Edwards, busting him open with elbows. Edwards doesn’t look like he’s having any fun whatsoever.

Hallmann made Edwards’ life hell. Continued to push the pace, Edwards looked like he was through, and finally put the rear naked choke on him to win it.

Winner: Piotr Hallmann by way of 2nd round submission

High looked good early on but Dos Anjos was aggressive. He continued to go after a kimura lock. High pulled his arm out of one attempt in a way that anyone who doesn’t know how to escape moves would do it. High held his own. He worked his wrestling with strength and quickness. Dos Anjos is really strong.

Dos Anjos poked high in the eye, so it must be in the water. Dos Anjos is starting to separate himself a bit here. They had some great grappling in this round. Right as Dos Anjos looked to be taking control, High found some energy and they were back on their feet. Dos Anjos threw a straight right and High folded. Dos Anjos followed up with shots on the ground, some illegal and it was stopped. High’s upset, but also wasn’t able to even try and block any of the punches.

Winner: Rafael Dos Anjos by way of 2nd round TKO

Back after the Cotto Vs Martinez fight in which Miguel Cotto stopped Sergio Martinez in 10. I’ll do my best to catch up to live TV with this show.

It looks like Dodson is fighting in fast forward while Moraga is fighting in regular speed. Dodson got hit low and ran around the cage holding himself and then ran right at Moraga as if the fight wasn’t paused, except it was. He’s just too fast for Moraga both with punches and kicks. Moraga is trying to time his punches, but he’s not coming close.

Moraga finally caught Dodson and grabbed him to hold him and hit him, but then Dodson took him down. Moraga was doing well as Dodson slowed down. Late in the round, Dodson threw a left kick but the knee connected first and busted up Moraga’s nose. Moraga immediately grabbed his nose while going down. Dodson tried to finish it, but Moraga held on. The doctor stopped the fight.

Winner: John Dodson by way of 2nd round TKO

Neither guy looked all that good (or in shape for that matter). But Sanchez’s reaction time is slow. He got caught with some shots that he probably should’ve have gotten caught with.

Sanchez isn’t mixing it up like he normally would. Not sure if that says he doesn’t feel it, or if he has decided that he doesn’t want to take the same punishment. He’s not even using his wrestling. Pearson dropped him with a right hand. Diego started to tell him to bring it. He threw a kick and Pearson caught it and took him down. Diego was back up quickly. That was the best moment of a rather lackluster fight so far. Diego flurried late, but it was too little, too late.

Bit of a rough round for Diego. He caught a big right hand and didn’t go down, so he just smiled and then wiped at his right eye that has blood coming from it. Sanchez was trying, but didn’t really have much all night. Wouldn’t say that was one of Diego’s best performances.

Benson looked a little apprehensive and it caused him to take a few punches and just generally not come out strong out of the gate. Khabilov looked okay, but the round was more of a feel-out round. Khabilov went for one of his patented suplexes but Benson blocked it.

That was more of a normal kind of Benson round. Strategic, tactical, smart, and leading the way. He wins the second round in what is so far a pretty interesting fight based on the way they are respecting each other’s strengths.

Henderson landed a lead right uppercut and followed it up with a left and immediately jumped on his back while he was going down and got the rear naked choke.