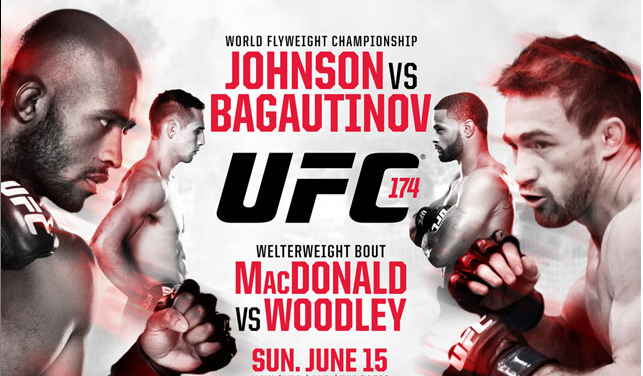 Check out our UFC 174 preview.

All year, we’re keeping track of our picks for most of the UFC main card fights. In addition to the FGB crew, included in our picks will be John LaRocca, president of Premier Wrestling, Heidi Fang from MMA Fight Corner, and Alex Goff from Online World Of Wrestling.

UFC 174 might be the lowest purchased UFC show of all-time. In fact, it might not even be the strongest Fox card that they could put out. But that’s what happens when you run so many shows. You don’t have enough quality main events. If you had a bigger main event on this show and pushed each fight down the card into the slot below, you have a pretty darn good show on paper. But without a true PPV selling main event, they’re probably going to struggle.

However, it’s still a numbered UFC show and we’re still going to make our predictions. Check them out below.

Duan: Rory MacDonald via decision
These guys are close on paper. It’s really tough to split them, but I think I just slightly favour McDonald. There’s that bit more potential there with him because he’s still young, and I think he probably learned a lot in those last three or four fights. You would expect clear fight on fight improvements to come from mixing with such experienced and accomplished opponents. This won’t be easy for him. I see Woodley as the strongest contender that’s out there that I would pick Rory to beat most of the time. He is the high bar for MacDonald right now. Rory can potential push on from there with a good win, but these are the type of fights he needs to bring him on.

Jim: Rory MacDonald via 3rd round submission
This really is a pick ’em fight as I see it. MacDonald is the more skilled of the fighters, but Woodley is so GD powerful that he can end things in a hurry. Woodley needs to pace himself, use his takedowns strategically, and pick his opportunities to try to land one of his bombs that can end the fight. Rory needs to avoid that power and get Woodley to expend as much energy as possible early in the fight. If he can out-move and out-point Woodley with technical striking for a couple rounds, he will likely have an exhausted Woodley by the 3rd. This is when Rory needs to move in and catch Woodley in a submission that he will not be able to power out of. I give a slight edge to Rory’s experience and think that he can pull off a victory in this match up.

Heidi: Demetrious Johnson via decision
While Ali Bagautinov possesses the skills to halt Demetrious Johnson’s reign, there’s one thing “The Puncher King” lacks – speed. Johnson’s footwork, head movement and speed keeps his opponents guessing. Bagautinov might be best served by disrupting Johnson’s timing early on, but picking him apart from the outside may not work as Johnson’s anything but stationary and has cardio for days. Pressuring Johnson’s pace, utilizing body shots and slams to tire him could work to his advantage. At any rate, expect a non-stop, fast-paced battle. Since Bagautinov’s never been finished in his career, I’m taking Johnson by decision.

Alex: Demetrious Johnson via decision
UFC’s strategy of World F’N domination has a few drawbacks. I would like to point out one here which is the challenger is a relative unknown in the company. With a large number of fights, it is easy for some of the fights to be over-looked on a card. Ali Bagautinov earned this shot after beating John Lineker, who was best known for constantly missing weight. Bagautinov hasn’t stepped into a fighting surface in MMA who I would consider championship contender level. That is why this fight is really hard for me to pick. I know what I get with Demetrious Johnson. He is good everywhere, super quick, and looks to finish all throughout the fight. Ali Bagautinov is a big X-factor to me that could shock the world, or could be a guy who isn’t quite ready to face the champion. I pick the champion in a decision. I don’t have a great reason why, other than the fact he is a great fighter and a known entity.

GG: Demetrious Johnson via decision
Mighty Mouse has been a fantastic champion so far, including finishing his last two fights. He’s hard to game plan for because of his speed. But, Ali Bagautinov does have a tremendous game-planner in his corner in Greg Jackson. There are some reasons to choose the upset. But after rumors of a fight at Jackson’s camp that left Bagautinov dinged up and having to start his training late because of visa issues, I’m not so sure those reasons are relevant. Bagautinov may very well become champ on day, but I don’t think he’s the best suited to beat Mighty Mouse. I think that person is John Dodson. I’m taking Johnson in a hard fight, but not all that of a close one.