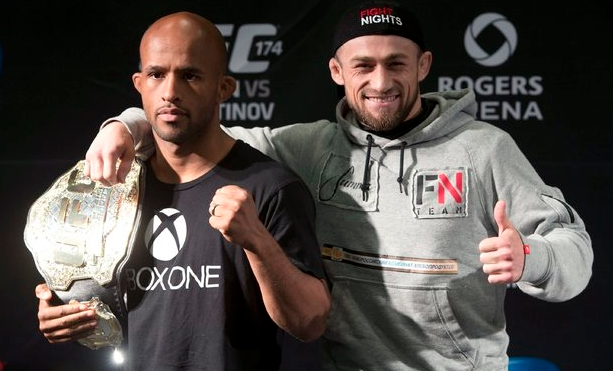 This is going to be a tough sell for the UFC. However, it’s a UFC main card and the die-hards (including yours truly) are watching.

Check out our UFC 174 live coverage.

Saint Preux landed one really nice punch and landed a couple other glancing ones. Jimmo didn’t really get off and Saint Preux got a takedown near the end of the round. Nothing much to the round, but Saint Preux wins it.

Saint Preux took him down and wrenched his arm and maybe rolled onto it. Jimmo yelled that his arm was broken and the fight is over.

Schaub is trying to set up the over-hand right. Everything he’s doing is to set of one shot to test Arlovski’s chin. He landed one decently well, but didn’t land the others. Every time he did, Arlovski tied him up and pushed him back against the fence. Arlovski did next to nothing the entire round.

Pretty disappointing performance by Schaub thus far. The UFC champ version of Arlovski would’ve put him away already. Schaub continues to try and set up that right hand and instead of landing it, he’s getting countered now. Schaub did land a nice uppercut. I have the fight split right now.

I think Schaub will get the decision, mostly from a strong 3rd round of wrestling. But that fight didn’t do anyone any favors. It was boring and neither guy looked to finish the other. Schaub’s jaw on the right side is swollen. At one point, Big John McCarthy warned Arlovski about headbutts. I’m not sure that’s where the swelling came from.

I think that’s the wrong decision.

Bader looked really good in the round. Feijao looked a step behind him the whole time. Feijao missed some shots as Bader was out of there. He landed one left. Bader got a couple takedowns and looks like the better athlete.

Feijao looks terrible. He’s tired or injured, or possibly just overwhelmed. He can’t get anything going and his fighting on the defensive while he waits to get taken down, and then is taken down anyway. Bader is up 2-0.

Feijao started the round off like he should’ve been fighting the entire time. He had Bader off balanced and on the defensive. And then, he got complacent, was taken down and the first two rounds happened all over again.

The fight was close to even until about the last minute when MacDonald pulled off a Sugar Ray Leonard by absolutely stealing the last minute. He started to pick up his striking and varied it with both punches and kicks. Woodley looked okay, but fighting too much of the fight off the cage.

MacDonald absolutely owned every second of the round. He pushed Woodley back to the cage and stood right in front of him, hitting with a variety of punches and kicks. Woodley landed a couple nice leg kicks, but not enough.

Woodley came out swinging and looked like he may have picked up the intensity. But soon thereafter, Rory was back in control, taking Woodley down and beating him up on the ground. Very impressive performance by Rory.

Johnson could’ve won this round without even landing a punch. His feints were excellent. Bagautinov couldn’t really anticipate anything. Late in the round, Johnson landed four knees to the body while in the clinch. Bagautinov got a late takedown, but couldn’t keep him down.

DJ didn’t score as often with his punches or in the clinch, but he still won the round fairly easily. He had a sweet takedown into a rear naked choke to end the round which would’ve been a cool finish. But right as he grabbed it, the bell sounded.

It was yet another fine round from DJ. At times, the fight seemed like a high intensity sparring match, but DJ out-classed him in every way. Bagautinov may very well be back here, but he’s not on the same level.

Rightfully so, he won every round on every scorecard.