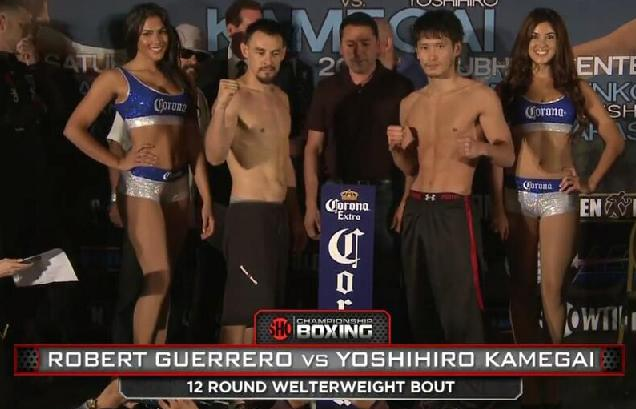 Robert “The Ghost” Guerrero is back facing Yoshihiro Kamegai in his first fight in over a year. Check out our Guerrero vs Kamegai live coverage.

Very entertaining strong start to the fight. Guerrero was using a short right hook early on that landed. Kamegai was throwing right hands of his own. Near the end of the round, Guerrero started opening up and landed power shots as well. Guerrero’s quantity of punches started to overwhelm Kamegai.

Guerrero is literally boxing circles around Kamegai. Kamegai backed him up against the ropes and punched his arms while Guerrero landed three uppercuts. Kamegai is off-balanced, but is trying to dig at Ghost’s body. Kamegai did much better late in the round as Ghost decided to hang on the ropes and let him pound away. Guerrero’s still up 2-0.

Lots of boxing inside a phone booth in this round. Kamegai is holding his own, but he’s also taking a bit of a beating. His nose is bleeding. Best exchange so far was about seven punch combination from Guerrero that Kamegai just ate. Kamegai isn’t losing these rounds by a lot as he’s competitive, but he looks to be taking a lot of punishment, or as much as Guerrero can dole out from a power standpoint.

Maybe Guerrero thinks he has a better chance to knockout Kamegai by staying in so tight because if he wanted, he could run circles around this guy. Kamegai is getting outclassed, but he’s hanging in there and may start winning this crowd over.

Guerrero made his head pop back once, but Kamegai fought tough. His face is starting to swell up though. The left hook is there for Guerrero if he wants to unleash it, but he’s throwing short ones rather than letting the big one fly. Kamegai landed a nice right cross.

All of a sudden, this is terrible strategy by Guerrero. His left eye is now closed and Kamegai isn’t going anywhere. Kamegai may have won that round too.

Better round for Guerrero as he mostly stayed out of harm’s way. But it’s a gut check fight for him. Kamegai is fighting like he has nothing to lose. The closed eye came form an uppercut in the previous round.

Kamegai was starting to bring it on, but Guerrero finally unleashed the big left hook and knocked him backward. He tried to follow up and finish him, but he’s very tired.

The round was fairly close, but Guerrero closed it strong with two big body shots that sent Kamegai backward. I have Guerrero up 7-2, but there are a few rounds that are close. Plus, Kamegai has that underdog thing going for him, which could sway some judges.

I think it’s easy to give Ghost this round, but I liked what Kamegai did in the middle. He was dominating the action while Ghost took the middle part of the round off. I still have Ghost up comfortably.

Kamegai outworked Guerrero again. While I still have Guerrero up 7-4, he seems to be losing steam. Not as much zing on his punches, and he usually picks up his effort late in the round. He didn’t do it here.

Guerrero had him hurt early in the round, but just like Frankenstein, Kamegai kept coming forward. Both guys came out with a hop in their step, but are clearly tired. Guerrero ended it strong. I have him winning 8-4.