The show had a lot of wrestling on it and two key angles, which made for a fun, though mindless show.

The word was that Vickie Guerrero was going to wrap up her on-camera WWE career after WrestleMania. But she lasted a few more months and was able to go out like a champ. After last week’s show-long storyline where she allowed Roman Reigns to enter the battle royal and win a chance to be in Money In The Bank, this week was Stephanie McMahon’s payback. And what a payback it was.

The storyline allowed Vickie to go out as a babyface (including cutting a fiery promo about how the Guerrero name is even more respected than the McMahon name) and made something that could’ve been completely in poor taste, fun.

Stephanie told Vickie that she would have to face her in a match to keep her job as the General Manager on Smackdown. Vickie was in her “Excuse Me” wrestling gear in the ring when Stephanie came out in the same dress and heels she was wearing earlier. The match wasn’t going to be in the ring. Instead, it was going to be in a vat of pudding. At least, that’s where the loser was going to end up.

Stephanie played it up for all it was worth and was really a tremendous heel all night long. She kept slipping and falling into the pudding and pulled the referee in with her. 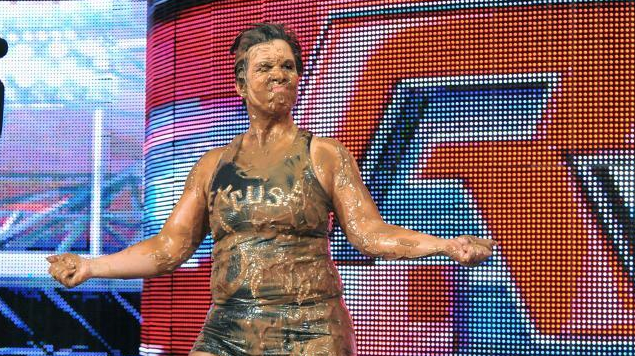 Who is in the second Money In The Bank match?

Last week, Triple H announced that Seth Rollins was the first participant into the second Money In The Bank match. This match would be for the briefcase while the main event is for the WWF World Heavyweight title. Triple H then announced the rest of the guys which included:

He left it at six.

RVD came out to interrupt a Seth Rollins promo about the Shield and they had a match. Rollins was about to win the match and then Dean Ambrose broke up the pin to cause a disqualification. Ambrose was a wild man.

Rollins convinced Triple H to add Ambrose to the match since at least he’ll be able to see him rather than being attacked from behind. Triple H said this was on Seth and agreed to add Dean as the 7th man in the match.

– Luke Harper defeated Jimmy Uso. Jey Uso then challenged Rowan and beat him. The Wyatts beat up the Usos and Bray Wyatt showed up on the screen to say he was going to win the Money In The Bank.

– Daniel Bryan was announced as being on the kickoff show for Money In The Bank.

– Bo Dallas beat Titus O’Neil. He said that he was 9 and Bo.

– Bad News Barrett beat Dolph Ziggler in a really fun match with lots of near falls near the end. Of course, he hit the Bull Hammer elbow to win.

– Jack Swagger beat Kofi Kingston quickly with the ankle lock. So much for Kofi.

– Big E beat Damien Sandow who was dressed as Abraham Lincoln. After the match, Big E cut a promo like he was preaching. My guess is that he just watched Coming To America. The promo was on Rusev who was shown in a segment earlier sight seeing near the nation’s capitol (Raw was in DC). Rusuv then jumped him and put him in the Camel Clutch.

– John Cena, Roman Reigns, and Sheamus beat Bray, Randy Orton, Cesaro, and Alberto Del Rio in a three-on-four handicapped match after Sheamus pinned Cesaro with the Brogue Kick. Kane came out and beat up everyone. Triple H came out to announce Kane as the 8th man added to the main event at Money In The Bank. Then, out of nowhere, Reigns speared him and pointed his fist at Triple H and Orton to end the show.