Dave Batista quits. And he’s replaced by a member of the Shield.

Seth Rollins turns on the Shield. 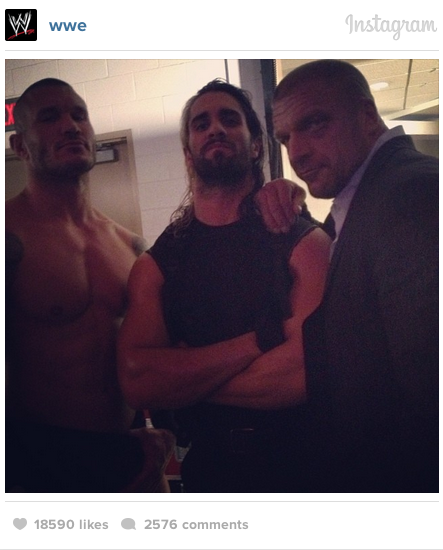 The first segment of the show had Evolution come out and Dave Batista wasn’t happy. He came back to WWE and didn’t get what he promised (which is kind of too inside because he was promised a title run and didn’t get it thanks to Daniel Bryan’s rise). He wanted a title shot. Triple H said that Daniel Bryan was hurt and he couldn’t get one and he would’ve screwed it up anyway. Batista said that he understands, but he quits.

Fast forward to the last segment on the show, which was supposed to be a match between Randy Orton and Roman Reigns. The Shield stood front and center in the ring and talked about their match with Evolution. Rollins said they were the ones to adapt and Evolution perished. Triple H and Randy Orton came out and Triple H said that he always had Plan B.

What was Plan B? Plan B was Seth Rollins of all people turning on the Shield and joining Evolution. Both Dean Ambrose and Roman Reigns were laid out.

I have a couple of issues with this as a fan. For one, I thought the Shield were main eventers and this company doesn’t have a lot of them. However, one could say that they’d gone as far as they could’ve as a three-some. But two, Rollins is best wrestler out of the three (and my favorite of the Shield), but probably the last one I would’ve turned. Maybe this allows him to have legs and they allow him to show how good he really is. But would’ve Ambrose, or even better, Reigns been the more shocking and star-worthy turn?

If we think back to 1998, WWE pegged The Rock as the next guy. He turned heel to join Vince McMahon and win the title at Survivor Series. Replace Rock with Reigns and McMahon with Triple H and you have a similar situation. I’m not sure if the key is having Daniel Bryan as a long-term champion, but at least we know that him vying for the belt is great television. And if Reigns would’ve someone garnered the title and Bryan chased him through next year’s WrestleMania (winning the Royal Rumble along the way), you have a version of Rock and Austin at WrestleMania 31. I don’t think it’s nearly as big as that as nothing they could do now would be, but I like that idea a whole lot. Hey, maybe they’ll still do it. But at this point, I’m just not sure Rollins is the right guy.

Again, that’s not against Rollins because he’s my favorite guy in the Shield. I still expect him to show his brilliance in his new role.

Also, the crowd was either so shocked they didn’t make noise, or they didn’t know what to make of their favorite team being broken up.

Daniel Bryan will face Kane at Money In The Bank.

This segment was really all about giving Cena Bryan’s rub. Would’ve probably worked better if Bryan was out there with him.

It was a weird dynamic. Stephanie was calling John a real champion and someone who understood how to be a fighting champion and Cena was degrading her by calling her spoiled and saying she sucked at her job. Whoever is writing this stuff doesn’t understand babyfaces. There was a joke about Stephanie’s boobs that seemed about 10 years too late, but there was no Chris Jericho to call her a trash bag ho. To make Cena pay, she booked him against Kane.

Kane came out immediately and he was disqualified. They spilled outside and Cena threw the ring steps at him which seems to be his new deal.

So let me get this straight. Stephanie calls Cena a real champ. Cena calls her spoiled. She gets him back by booking Kane. And he throws steps at Kane to fend him off so easily. It’s no wonder that this dude can’t win with the fans. They book him backward.

– Bad News Barrett and Cesaro lost to RVD and Sheamus after Cesaro walked out on Barrett and he ate a 5 Star Frog Splash.

– In your ridiculous time-waster of the week, Damien Sandow came out in a Lance Stephenson jersey since they were in Indianapolis. The Big Show came out (who was really a college basketball player) and Sandow wanted him to try to get by him and score. Instead, Show threw the ball at him and then punched him in the face.

– Bo Dallas beat Kofi Kingston with the Bo Dog. I still think this is a month gimmick at most. Maybe Bo will prove me wrong. But the crowd was already chanting, “Bo-ring,” at him.

– Los Matadores beat 3MB in the Groundhog’s Day match. No, that’s not what it was called, but they can’t really be matched up with anyone else.

– Alicia Fox and Aksana beat Nicki Bella in a handicap match. After the match, Aksana dropped a knee right on Nicki’s larynx. I wonder if Nicki swallowed her tongue?

– Luke Harper and Rowan beat the Usos in a long match that was good in spots. I guess this sets up a title match soon.

– Alberto Del Rio beat Dolph Ziggler to qualify for Money In The Bank.

– Cody Rhodes picked Sin Cara to team with Goldust to lose to Rybaxel. Next week, he might pick Camacho.

– Rusev was dressed in a suit with no tie and received a gold star for winning his match for Russia at Payback. The Russian National Anthem played, but Nikolai Volkoff was nowhere to be seen.

The show was better than usual, but coming off a PPV Sunday, that was expected. It was angle heavy, which was fine, and your enjoyment of the show is probably based on whether or not you liked the main event angle.